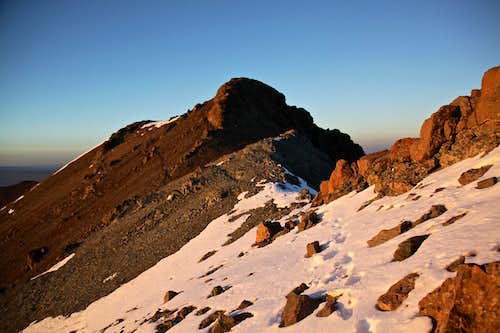 S 8 from the east 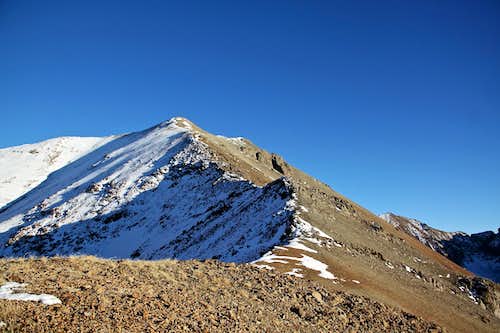 West Ridge of S 8
S 8 or "S 8" is located along the western crest of Sneffels Range. The peak is kind of pushed south along an undulating ridge and is not that prominent from Highway 62 connecting towns of Ridgway and Telluride. From this highway S 8 is sort of hiding behind its neighbor S9. While the peaks east of Mount Sneffels are pretty popular (some of these peaks being centennial and bicentennial peaks with relatively easy approach), the western peaks are rarely climbed - partially due to its lower elevation (still 13ers though) and partially due to a difficult and long access.
S 8 is accessible from Deep Creek drainage from the south and that was the route I chose (also I preferred south facing approach since it was late in the season and wanted to avoid snow). Expect a lot of bushwhacking and a long approach bypassing several private properties and adding mileage to your hike. Surprisingly there was not much scree.
S 8 combines nicely with other peaks along this ridge. I started late (noon) and ran out of time to run to S 9, which was my original plan, but got to celebrate a nice sunset from its summit and kind of an interesting descent and bushwhack in the dark. Expect peace and solitude.
Colorado Rank: 440
Rise: 552 fet
Parent Lineage: Mears Peak
Wilderness: Mount Sneffels
What's up with the name? There are many summits that have unofficial names that have sprung up because of local usage or traditional agreement in the climbing community. Examples of these are some of the "T", "S", or "V" designation summits in the San Juans.
S 1 - is the original name for Coffeepot
S 2 - was name used by San Juan Mountaineers for Mount Ridgway.
S 3 - unranked summit between T 0 and S 5
S 4 - ranked peak, on a ridge extending from S 5
S 5 - unranked peak
S 6 - see SP site here
S 7 - is really the main summit of Ruffner Mountain
S 8 and S 9 - accessible from Deep Creek drainage.
S 10 - a little complicated since List of John assigned this to Point 12,311 and Colorado 13ers assigns this name to a 13er west of S 9.
Nearby Peaks:

From State Highway 145 at “Society Junction”, 4 miles west of Telluride, drive on 145 just a little east past the junction and turn left (north) onto “Airport Road” = “the Last Dollar Road”, # 638.

Follow the road uphill and around a sharp turn at the head of a drainage. The road continues west past the Aldasoro Ranch entrance. Bear right when the Airport Road turns off for the Telluride airport. It becomes a good dirt road here - no need for 4 WD vehicles. Continue NW and in under a mile, park at the on the right in a trailhead parking area with a small corral. The Uncompahgre NR map indicates that this is the beginning for trail # 418. There is a sign for Deep Creek and Whipple Mountain Trails.  There is some private property across from the trailhead parking. 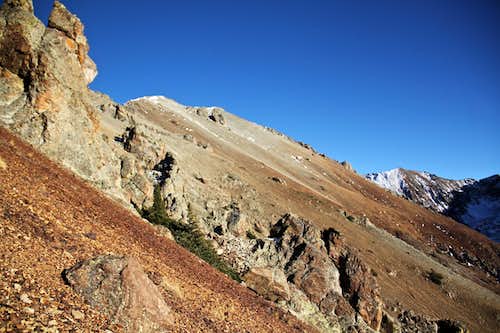 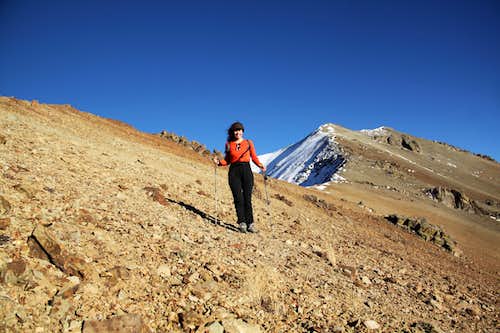 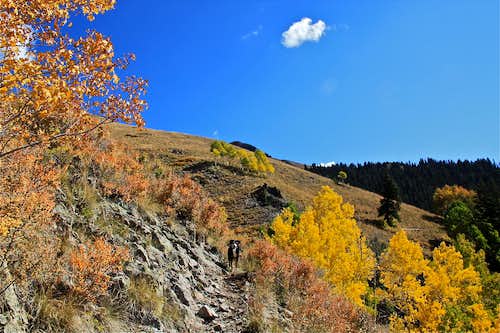 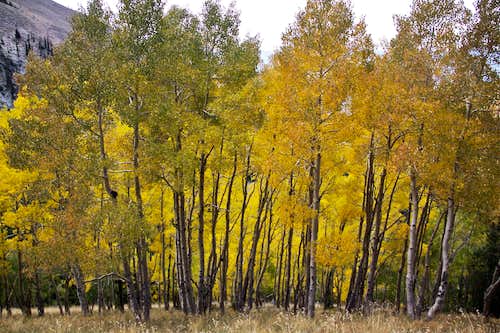 Aspens turning gold
As any mountain there are many routes up it.
Trailhead: Whipple Mountain/Deep Creek
Class: 2
Start at the Whipple Mountain/Deep Creek Trailhead, and follow initially the nice and well marked trail. Turn off from a big trail (almost like a 4WD road) west on a well marked Whipple Trail - single track trail. Cross the Deep Creek over a bridge, continue up and down on a marked trail high into the Deep Creek drainage. Eventually, you will come to a place where a trail splits with a main trail going towards Whipple Mountain/Pass and a smaller unmarked trail on most maps leads higher up into Deep Creek basin. This section of the hike is very pleasant following the Deep Creek.
I took Deep Creek trail, which was initially easy to follow. Once I crossed again Deep Creek, I lost this trail and was following some deer trails into a higher basin with an open grassy meadows. Expect some bushwhacking here. I ascended a south facing slope on mostly grass with short sections of talus. It was a long ascent, but it took me to the west ridge of S 8 and once on the top of the ridge, the walking was easy on a stable talus with great views. Nothing too exposed or difficult. The views of S 9 were spectacular. I reached the summit at the sunset and did not have time to continue onto S 9 as originally planned.
It appeared that connecting S 8 with S 9, S 7, Mears Peak and Ruffner Mountain would be easy. The descent via west ridge was fast - I tried to move as fast as possible with the approaching darkness, once in the basin it was pitch black and bushwhacking was adventurous. I joined the Whipple Trail with a relief and the rest of the hike in the darkness was uneventful. It took me 5 hrs to reach the summit.

Hiking, parking at the trailhead, camping in the wilderness are free.
Mount Sneffels Wilderness rules apply: The following are prohibited: Entering or being in the area with more than 15 people. Camping within 100 feet of any lake, stream, or National Forest System Trail. Building, maintaining or using a fire within 100 feet of any lake, or stream, or National Forest System Trail, above treeline. Storing equipment, personal property, or supplies for longer than seven days.

Summer is the easiest with a nice approach mostly on trails into the basin, higher up hiking is off trails. Winter poses a lot more difficulties with a long approach in a deep snow and travel through an avalanche prone terrain. Always check for Northern San Juan Avalanche forecast prior venturing out there.

Trailhead for Deep Creek and Whipple Creek is slightly off Last Dollar Road. The parking lot is spacious. There are signs for no camping, but I would imagine that sleeping in the car would be pretty comfortable here.

Camping is hard in the close vicinity of Telluride. The closest designated campgrounds are at the “Town Park” on the east end of Telluride and the “Sunshine” campground south of Society Junction on SH 145. Click here for more information on Telluride Camping.