Säuling is part of the Ammergau Alps, located near the town of Füssen (Bavaria) on the German-Austrian frontier, and overlooking the world famous castles of Hohenschwangau and Neuschwanstein. With just over 2000 meter (2047 to be precise) it is one of the higher mountains in the Ammergau Alps. It is the highest point in the Säulinggroup (named after this mountain).

Even though Säuling has an altitude of only 2047m, thanks to its beautiful pyramidal shape and high prominence, it dominates its surroundings. When one approaches the Ammergau Alps from the north, Säuling is clearly recognizable from afar.
Säuling is a highly frequented mountain in this region. First because of its accessibility (thanks to two hiking trails to the summit) and secondly because Säuling offers some sublime views on the German and Austrian Alps as well as on the Bavarian hills and the lakes around Füssen (Forggensee, Hopfensee, Alpsee,...).
The name Säuling probably comes from the word 'Saule', meaning 'pillar'. The name would refer to the shape of Säuling.

Allgau (on the descent towards hohenSchwangau)

Säuling can be approached both from its German or Austrian side.
Via Füssen/Hohenschwangau (DE).
Via Reutte/Pflach (AU).
Both easily accesible by train/bus, as well as by car. 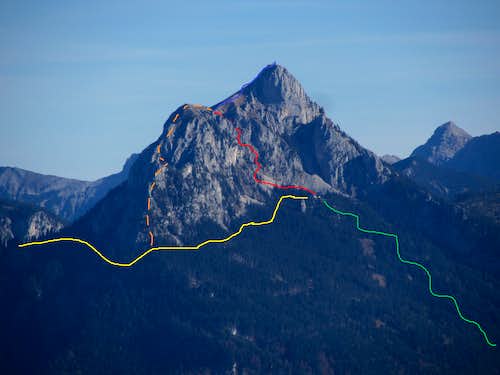 Sauling: different routes:  - Yellow: option II when starting in Hohenschwangau (to Saulinghaus)  - Green: trail from Pflach (to Saulinghaus) - Red: continuation of the yellow and green trails. - Orange: 12 Apostelgrat (via Pilgerschrofen) - Blue: final part towards the summit (the same for all routes)

This hike starts in Hohenschwangau. Here you have the possibility of walking past the beautiful, but (too?) touristic Neuschwanstein castle. Next you follow a small road towards Älpele (1296m). Here you turn right towards the Wildsulzhütte (1427m). Here you have two options: (I) you can go left, which is a more direct route. After a while there will be some easy scrambling when hiking up the north face (mostly secured). (II) You can also go right after the Wildsulzhütte. This route is a bit longer, as it takes you around the Pilgerschrofen (1759m) to the south face of Säuling. This route is a bit longer (but in good weather more agreable than the north face). It takes you to the Säulinghaus (and on to the Austrian route), and from there (after some easy (and secured) scrambling) to the summit.
2. Normal route from Pflach (AU):

This hikes starts on the Austrian side. In the village of Pflach. Startingpoint is the parkingplace Säulinghaus. Here you follow the trail towards the Säulinghaus (1694m). After the Säulinghaus there is (as mentioned above) some easy scrambling before reaching the summit.
3. 12 Apostleridge (12 Apostelgrat)

Very demanding hike/climb. Startingpoint could be Hohenschwangau or Pflach. First you go towards the base of the Pilgerschrofen. From there on you follow the ridge towards Pilgerschrofen and, from there, the ridge connecting Pilgerschrofen with Sauling.
Rockclimbing: parts of the route are grade II - III.
Some climbing gear is required: rope and climbing gear (especially for abseilen).
More information on this route:
- http://www.hikr.org/tour/post108267.html
- http://www.hikr.org/dir/12-Apostelgrat_63954/ 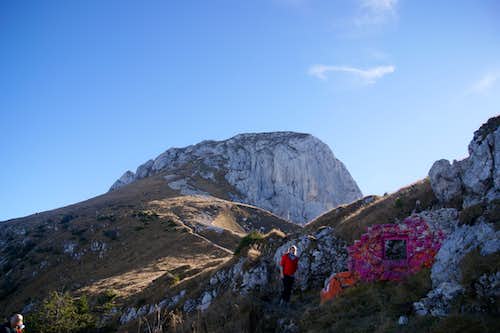 The last part towards the summit of Sauling 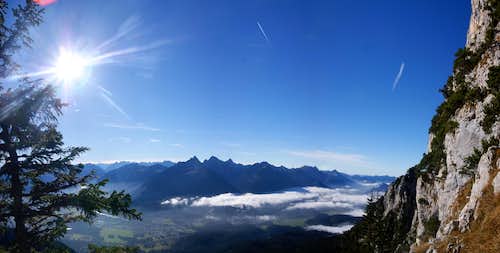 Säuling is mostly climbed in summer and autumn.