The day started at 0700, as Jill's friend Robert picked us up at the house. We were off to Main Street Overeasy for breakfast, then up to the summit of Sacagawea. After breakfast, we arrived at the trailhead around 0845.

Skies were mostly clear around the summit, just a few wispy clouds around. The valley below was a different story. As we broke through the trees, we saw that we were higher than the clouds in the valley. We kept on moving along. As we reached about halfway up the bowl, we noticed that the coulds were blowing in our direction. Just below the ridge we stopped and sat down, watching the clouds blow in on us.

This is usually the precursor of bad things, so we waited for a while to listen for thunder, and just watch the clouds dancing and rolling on the wind currents. After about 15 minutes, we headed on up to the ridge.

Once up on the ridge, we were back above the clouds. We trekked on, pushing for the summit. As the trail steepened, we could see all the way down the ridgeline. Clouds were trying to move from one side of the mountains to the other, it was really spectacular. As we neared the summit, the clouds were successful in thier push over the ridge, and we were socked in. We made summit about 1030.

We had the top to ourselves, and just enjoyed the isolation. I was bummed out that I couldn't really take in the view, but the clouds made it almost surreal. We threw on another layer, as the temperature had dropped about 15-20 degrees since we started out. While looking through the summit log, we found some interesting entries. We added our own, and headed down.

As we left the summit, we were met by a golden retriever and 2 women. The first people we had seen all day. We saw 2 more people on the way down. Quite a remote area, maybe just a slow day.

This was a great trip, and my first experience in Montana. The first of many, that's for sure. Great hike, great company. The weather could have been a little better, but I'm not complaining. I'll take this any day. 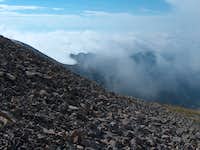