When viewed from certain angles, Saddle Mountain is perhaps the most dramatic peak in the Elkhead Mountains, though this is dependent on which direction you are viewing the peak from. The mountain itself is a volcanic dike that forms a long ridge with steep sides. No trails approach the peak and it was perhaps a bit more challenging than expected, even though the difficulty on the easiest routes never really exceeds class 2+.

By Elkhead Mountains standards, Saddle Mountain is “average” in popularity of how frequently it is climbed. We were the first to sign the register (which I replaced with a sturdier container) in two years, but on the other hand two other people met us on the summit, which is a rarity in the Elkhead Mountains (other than perhaps two or three summits). Saddle Mountain is not climbed as often as nearby peaks such as Hahns Peak, Sand Mountain or Bears Ears, but is climbed more frequently than nearby peaks such as Mount Oliphant or Buck Point. Some of the signatures in the register date back to at least 1974, but there may be some older than that that are illegible. The peak is one of the more challenging of the 10,000+ foot peaks in the Elkhead Mountains. 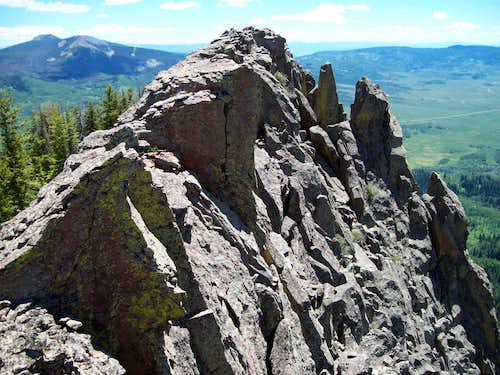 This is the summit of Saddle Mountain.

The topo maps available don’t show the roads or trails around this mountain accurately (though the main California Park Road is pretty close). The closest one that bears resemblance to reality is the Forest Service Map-Routt National Forest, but it is of a small scale. The USGS maps don’t show many of the roads in the areas, but seem to show roads and trails that don’t exist; at least not any more.

From Walnut Street in Hayden (on Highway 40 between Craig and Steamboat Springs), turn north on Walnut, a.k.a. County Road 76, and follow it north for 0.7 miles to County Road 80. Turn right on (gravel) County Road 80 and follow it past the California Park Guard Station. There are several possibilities of where to park (since there is no official trailhead), but we parked at the small saddle marked Elevation 8270 on the topo map. This is 1.2 to 1.3 miles north of the Guard Station turnoff. 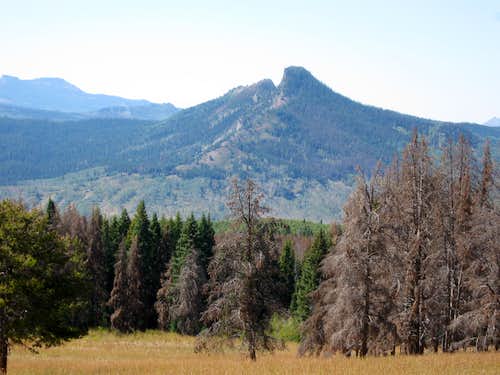 Saddle Mountain as viewed from the east.

There appear to be several route possibilities available on the mountain, but I’ve only climbed the Southeast Ridge, which may be the most practical route up the mountain. The route is steep , slippery and tedious in places and can have some minor bushwhacking, but the difficulty never exceeds class 2+. See the route page below:

From the summit register, others have climbed the peak from the north, which appears to be a steep, but non technical route. 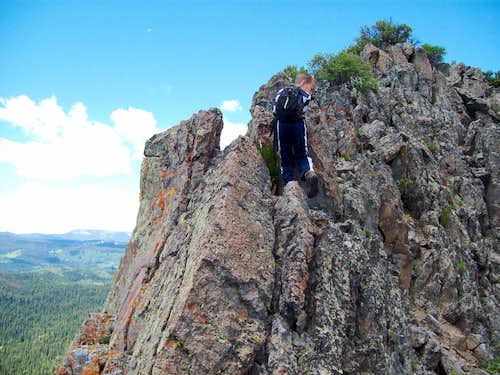 There is no red tape, but make sure to tread lightly. 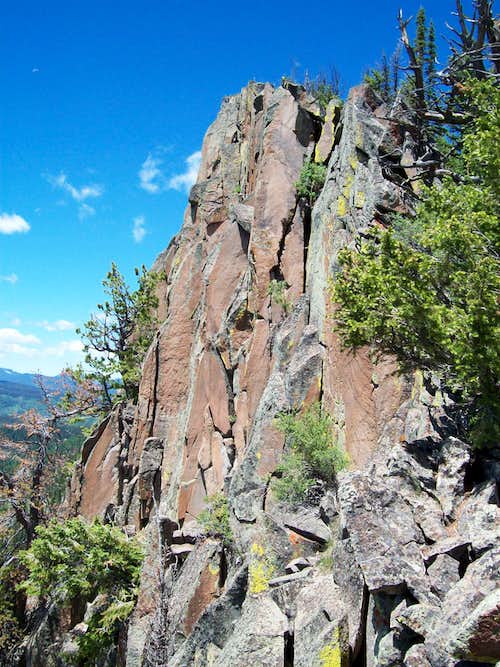 There is no red tape in these mountains.

There are many excellent campsites along the road to California Park after you reach the forest boundary. The road is closed until July 1 each year.

July through early September could be considered the normal season to climb the mountain. The access road doesn’t open until July 1, but the roads could certainly be walked, snowshoed, or skied before then, though it would be a long haul. The Elkhead Mountains are a very popular hunting destination in September and October (until snow closes the road), so use extreme caution at this time of year. In winter, this mountain is a fair distance from the road closure, climbing the peak would require at least two days, maybe three (unless you have access to a snowmobile). 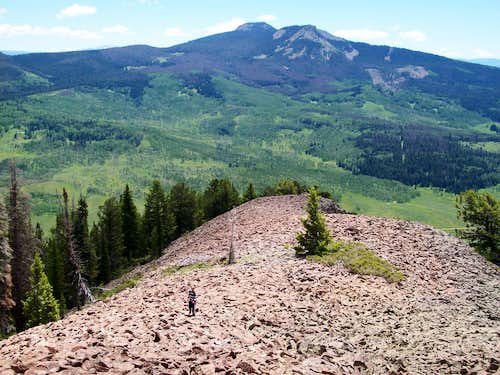 Kessler on the SE Ridge of Saddle Mountain in July.

Below is the National Weather Service Climate Summary of Steamboat Springs. The data is from 1908-2005. This is the closest long term weather station, but be aware that higher elevations will be much wetter and colder. Steamboat Springs is at 6695 feet elevation, so expect the temperatures on Saddle Mountain to be 10-20 degrees colder than in Steamboat (except for cold winter nights).