Scotts Bluff has been one of the major landmarks in this region of Nebraska for many centuries – first for Native Americans, then for immigrants that arrived later. The summit has the greatest prominence of any in the state, even though it is not the highest summit. The Saddle Rock Trail is the hiking trail to the summit. The trail to the summit is about 1.6 miles long and will take you over400 feet higher than the Visitors' Center. Hiking this trail is unique for western Nebraska trails,because it is graded and paved, even having a scenic tunnel to get from one side of the butte to the other side. At the summit, hikers will find spectacular views in all directions by using the summit area branch trails to overlooks. 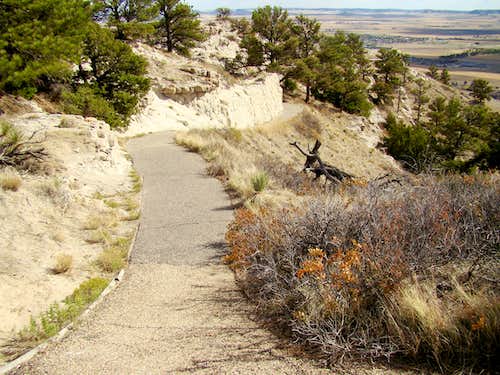 Scotts Bluff is west of the Gering-Scottsbluff area. To get to Scotts Bluff go south from Gering on Highway 71, then turn west on Highway 92. It is just a short drive to the Visitors Center, where you will find the trailhead for the Saddle Rock Trail. 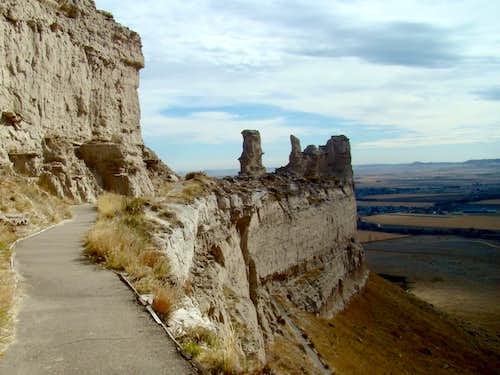 The start of the Saddle Rock Trail begins just east of the Scotts Bluff National Monument Visitor's Center. According to the park website, there are no entrance fees or park passes required. The visitor center entrance is on the south side of the building. On the sidewalk just east of the main entrance, there's an obvious sign that says "Summit Trail" with an arrow pointing east.

Follow the sidewalk to the east end of the Visitor Center building, in which you will see a paved trail leading north towards the monument. Less than 100 feet from the building, an obvious sign says, "Saddle Rock Trail." From this point, follow the obvious paved trail towards the summit.

This route is quite easy, especially with the paved trail, but the basic route should be outlined anyway. After following the paved trail north as displayed above, continue as it begins to switchback up the south side of the monument. After gaining a little elevation, the trail will switch east and make its way through a tunnel. From this point, the trail will go back north along the edge of the butte, and then switch back towards the top. 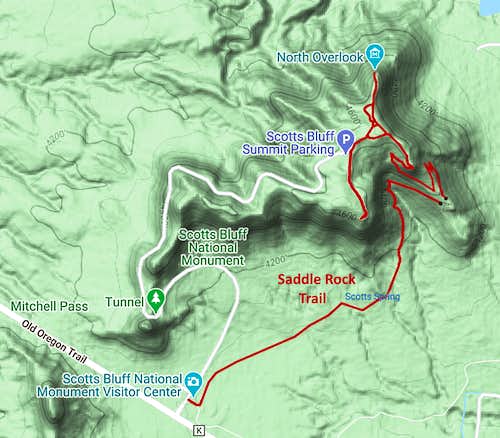 Just before you reach the top, there's a prominent "point" that is closed off. Nonetheless, you can venture out a little way. Once you reach the top, there's a network of trails, but in order to achieve the true summit, keep to the east side of the butte, and you will come across a sign that says "Eroding Landmark." This feature marks the summit of Scotts Bluff National Monument.

A Word on the "Rock" Found in Western Nebraska Summits

When viewing western Nebraska buttes, bluffs, cliffs and small peaks from a distance, the “rock” coloring might suggest good sandstone, leading a climber to think there might be some good rock-climbing options there. However, western Nebraska “rock” is usually a combination of clay, siltstone, volcanic ash and some sandstone combined to form something more erosion resistant than just clay by itself. This is why these formations remain. 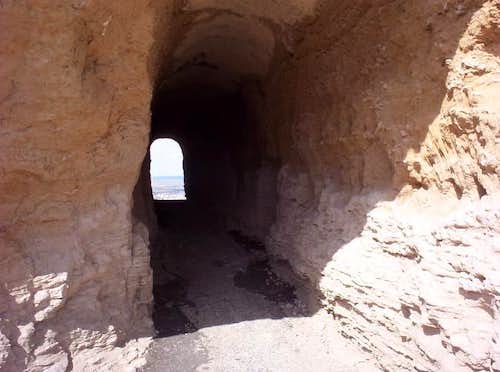 The trail goes through a...

However, this “rock” tends to be crumbly by nature, and still erodes – just not as fast as the soil nearby these formations. Many climbers have attempted scrambles up these formations, only to have them breakaway, causing injuries. There is normally little or nothing one can anchor to for protected climbing. Obviously, great caution is warranted even for simple scrambling. These factors are part of why climbing is not allowed on the other summits in the monument, and why hikers are directed to stay on the trails.

The Saddle Rock Trail was closed for a long period of time, due to a rock slide that had covered a large portion of the trail.  Wet weather tends to aggravate such occurrences, so please factor these things in your planning.

Very little "special" gear is needed for this hike. Ordinary athletic shoes will do just fine, as will shorts and a T-shirt in summer weather. Use warmer clothing accordingly. Sunscreen and bug-spray (ticks can be abundant in the long grasses) would be wise in the summer months. A bottle of water would suit just fine, as the hike is only about 1-2 hours. Beware of rattlesnakes! 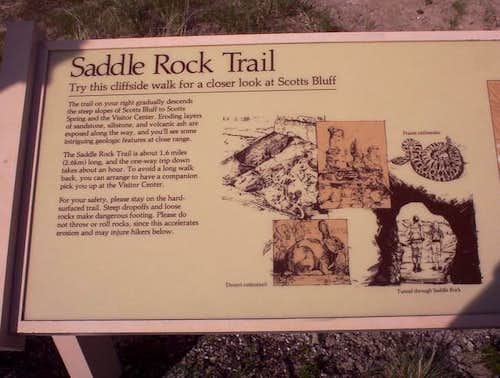