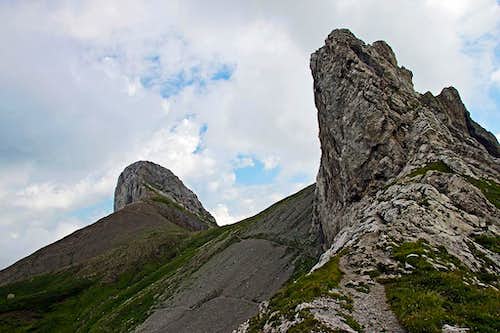 Despite its telecommunication monster on the top and cable car reaching it, Saentis is still a very desired goal for hiking and climbing. Many marked paths are reaching the summit from all sides. Some of them are being used only one way - for the other way (descent or ascent) the cable car is used then. But nice are also many combinations of round tours. Nasenloecher route is a quite demanding hike up. Due to its beauty, many experienced hikers use it. But you will never see it crowded. On the Schwaegalp side of Saentis the big majority of those who hike up on top go by the Tierwis Huette - the easier route which we can use for descent.

On the Nasenloecher route we shall experience all the variety of Alpstein mountains. We shall start the tour on nice alpine pastures, continue over steep and even exposed grassy slopes, which will bring us without major problems over the huge NW face of Saentis massif. But on some places, we shall have to touch the rock to climb over. Then we reach lonesome high valleys, a true paradise for wildlife. Even higher, we shall cross a picturesque high plateau, which is a true handbook of geology. Then finally the summit ridge needs to be negotiated and for a finale we shall climb up the famous Himmelsleiter (Heaven Ladder) - well, it's easy, because it's overprotected. And to be honest, the transmission tower on top, being with Swiss precision exactly 123.55 m high, is impressive as well. Finally, we are rewarded with a borderless view.

About the name: "Nasenloecher" means "Nose Holes" - so people named two big holes in rocks in the middle of the route.

Difficulty: It's a hiking tour, with a few places protected by steel cables and pegs. On the Swiss Hiking Scale its difficulty is graded T4. The crux is just before exiting the big NW face and reaching Oehrligrueb (high valley). Steep and exposed grassy slopes there require maximum concentration. But the path over those slopes is still well beaten. Don't go over there when the slopes are wet and so even more slippery! The two short ferrata sections are easy (B/C) - just some power is needed to pull over and overcome a 4 m high rock wall.

Orientation: The route is well marked. Nasenloecher route (over the NW face) is marked with white-blue marks, meaning in Switzerland a higher degree of difficulty than the usual red-white marks. Map to recommend: 1:25.000 - Wanderkarte Appenzellerland. See also the GPX track in the header!

Exposition: Some places are very exposed and so not appropriate for people suffering from vertigo. On grassy slopes, for unexperienced hikers or children protection with rope is hard, even more, because there's a lot of slopes crossings. Himmelsleiter is exposed too, but steel cables on both sides offer a good protection.

Objective dangers: Grassy slopes are very muddy, so, when becoming steep, your shoes are not gripping as they should. On the high plateau, follow carefully marks and consult a map - especially if fog catches you. In early summer, if that terrain is covered by snow, be careful - there are deep holes, chiasms in those rocks!

Time for ascent: 4 h. If you descend by cable car, then it's a half day tour, otherwise the Tierwis decent takes you another 2 h 30 min.

From the big parking place on Schwägalp we go by a cart road along the huge NW face of Saentis - first in the NE, then in the N direction. We pass Schwägalp pasture (huts) and reach the grassy shoulder with Chammhaldehütte, 1396 m. From there we continue eastwards (losing some 50 m of altitude) to Dreihütten and again up towards the NE on another grassy ridge, 1391 m. Some 700 m after Dreihütten (and before reaching Schwizeraelpli) there is the key crossroads (plates). The Nasenloecher route deters right up the grassy slope. Almost 1 h till there.

At first we overcome a steep, muddy pasture. Beyond the fence the path is only a bit less muddy. But it starts going up even steeper. In many turns it avoids rock sections. Higher the terrain becomes more and more rocky, but the path still mostly uses grassy slopes. It traverses towards the left and up, until reaching two characteristic holes in rocks. From there on the steepest part begins. The character remains the same, only that exposure rises and there are also rock sections to be climbed. Above the second protected section the steep face suddenly ends. Coming around a corner we are surprised finding ourselves in a shallow, nice high valley. It is called Oehrligrueb.

Now we only walk comfortably up the valley. Then a short, steeper rocky barrier must be climbed (easy, again steel cables help us) and we find ourselves in the beautiful, broad and completely flat Hinter Oehrligrueb. The path turns left there and detours the meadow in a clockwise direction. From the left the path, coming from Seealpsee joins us. By a rocky and rubble slopes we gain some more 50 meters and climb over another rocky step. So we reach the saddle of Hoechnideri, 2121 m. The plate teaches us that we have another 1 h 30 min to the top of Saentis.

From there on we follow the usual red-white marks. They cross the high plateau, called Rosegg. Rocks there are really unusual. White limestone is mixed with strange red rocks. The path winds left-right and on quite some places we are also losing some gained altitude. On the first edge the summit of Saentis appears in the distance.

The path over the plateau clearly goes in the direction of a small glacier (or snow field) - Blauschnee. Finally we reach its rightmost (northern) part. When it looks that we shall have to cross the snow, the path goes right up and crosses the rocky wall, being artificially cut into the rocks. The passage is broad and comfortable. Then we indeed reach the ice field, but the path deters immediately right and steeply up the rocks. Climbing is easy and some passages are again well protected by cables and chains. So we gain the main (north) ridge of Saentis. From the other side the Tierwis route comes up there.

The last part is well protected again. We first cross the ridge elevation and again descend some 30 m into a narrow notch (Blauschneelücke), where the Himmelsleiter begins. In the notch we can see a thick rope, hanging down towards the glacier. So, instead of going up and down the ridge, in good conditions, and if you trust the rope is really there, you could easily reach this last notch also over the Blauschnee. Himmelsleiter itself is again steep, but easy. Actually, where the steps are not carved in the rock, big metal steps are implanted. And you have a steel cable on both sides. So you reach the summit buildings quickly.

You best descend by the Tierwis route, or by cable car.