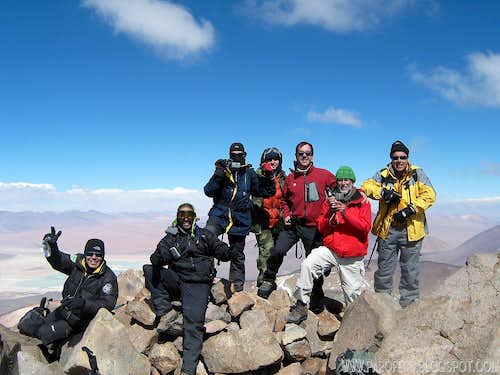 The summit group (formed while climbing!)

The summit block
Sairecabur volcano is a huge mass of volcanic rock nearby Licancabur and Juriques volcanoes, directly at south of Putana volcano.

Its altitude has been discussed by many authorities in the last 3 years so it's not precise yet. Some of them believe that its definitive altitude is about 5.976 m high. But most of the chilean people who climbed it, mountain guides and clubs strongly defend the theory that it has 6.006 m, others 6.020 m, and even others more 6.046 m. I know some chilean people that climbed the volcano a couple hundred times and one of them told me that he went up to the summit with 4 others friends, each one of them using a different gps to measure its right altitude, and when they did it all of them saw one different altitude, but at the same time, all of them measured above 6000 m. The smaller altitude was 6.006 m. Maybe the pressure changes a lot up there and in that case, would be very hard to get to a definitive number. But, whatever, i think that is not that important, just reporting the info.

Sairecabur volcano has a huge crater at 5.500 m above sea level. You can get there by car (4x4 of course) and stop at the Receiver Lab Telescope facility, good place for photos too. When i went there 13 months ago (april 2009) i asked to the driver to stop at 5.200 m high, so the climb gets more challenging since the volcano also is considered to be one of the most easier 6000 peaks at the andes. However, don't make a fool of yourself, it is a 6000 peak so if you don't acclimatize for that mountain, you can get a serious altitude sickness, such as cerebral edema or pulmonary edema. Several agencies take you to the climbing but be careful, it is highly recommended to spend at least 4 or 5 days at San Pedro de Atacama (2.300m high), doing several altitude tours such as Geysers Del Tatio, Lagunas Altiplanicas, Laguna Cejar and if you want to, Cerro Toco (5.604 m) to be sure. once you're ready, go for it!

The cold: The volcano is at the atacama desert but it is a really cold mountain, normaly, the only one close to San Pedro de Atacama that has always some snow you can see from the city (first mountain at the left side of Licancabur). I climbed it at summer and i got -12°C windy, it felt like -20°C. I had a close frostbite at my nose, very scary situation at the time. Yes, like i said, it is considered to be an easy 6000 peak but, it is a 6000 peak! Don't underestimate the volcano, it is a hard and cold climb especially if you never reached that altitude before.

The true summit is a rocky mountain called "Cerro La Teta", that means "niple peak", because the summit mountain itself reminds of a great breast with a niple at the top (the summit), it's hilarious!

To get there is easy, You have to get to San pedro de Atacama - Chile. Once you get to the city, just look for a transport and if you don't feel like going up alone (there's no visible trail to follow so normaly people go on guided expeditions) i suggest you to hire a guide. There's plenty of them at the city. The expedition cost is around CH$ 100.000,00 (about US$ 200.00) and it is one day only climb! That's why i said it's dangerous because the altitude difference between the summit and the city is huge: 3.700m.

My video for the project "33 days, 33 thousand meters" of the climbing.

If you want to camp (i think it's not necessary at all if you're acclimatized but if you don't, camp!) you can do it close to the Receiver Lab Telescope facility at 5.500 m high. But chose a good tent, it is really windy there, and cold. 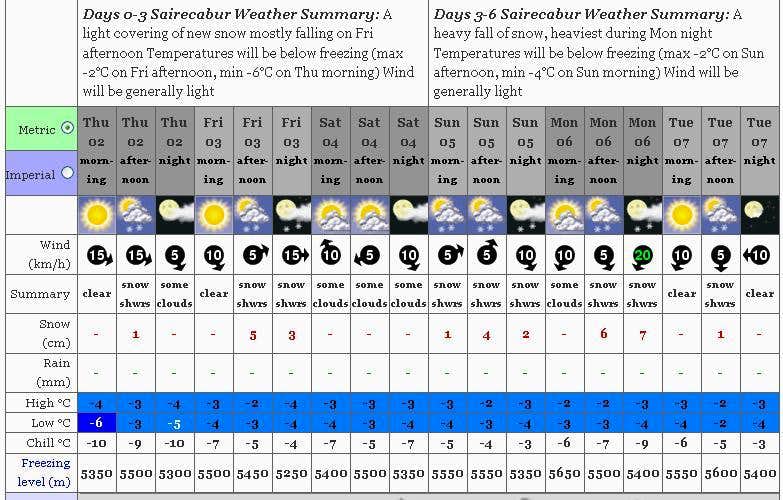