Salbitschijen 2981 m is a granite peak belonging to Urner Alps and overlooking Göschenental in the Swiss district of Uri, central Switzerland. Urner Alps - or Uri Alps - are located amongst the three most popular cols in Switzerland: Sustenpass to the North, Furkapass to the South and Grimselpass to the West. This group is famous in reason of its compact and fine granite, that can stand comparison with M. Blanc. Although Salbitschjen is probably one of the most visited mountains by rock climbers in central Switzerland, it can hardly be seen from other peaks. It is surrounded by many higher and more impressive mountains like Dammastock, Fleckistoch, Sustenhorn etc.

Salbitschijen is a high class alpine rock destination, featuring the classic West and South ridges, plus many other routes accessible from the Salbithütte, renowned in reason of the excellent quality of its rough granite. It became famous in the Eighties, because of the routes realized by the Remy brothers, but actually it already counted some wonderful classic routes opened between the Forties and the Sixties, including the South and West ridges. No wonder that hikers do not climb it, therefore I will not talk about a "normal route", although the descent is easy and could be considered as "normal". But you will hardly see anybody who chooses that route to climb Salbitschjen.

I do not know of any rock climber, who is not enthusiastic about this mountain. No glacier impedes its access, its granite is of the highest quality and there are a variety of difficulties. Easiest is the east ridge (IV), which is a good starter. Very difficult are its 5 towers on the west ridge (VII), each of which offers several difficult routes. However, most people are attracted by the south ridge (V). Indeed, you can climb it over and over again and it will never bore you. It is a classic. Whenever a friend of mine asked me to rock climb I invited him (and very often her) to this ridge.

This ridge has one extraordinary advantage: if it is deemed to be too difficult for a partner, you can always quit, rappel to the west or change to the Hug-Kurz route (III) and still reach the summit. Another nice feature of this mountain is its mild climate. After a summerly snowfall, it takes one day of sunshine, and the rock is warm and cozy, and the sun manages to dry the rock in one hour after a rainfall. Very often we have chosen sunny days in October or even November, when no crowd bothered the ridge and the Salbit hut was empty. There are two shelters available for this mountain. For all climbs use the Salbithütte (2105 m), except for the West ridge choose the Salbit bivouac (ca. 2400 m)

The main town in the area is Andermatt, a little town lying at St. Gotthard Tunnel northern exit. Andermatt can be suitably approached:

From Andermatt follow the road towards Göschenen (5 Km. from Andermatt); in Göschenen turn to left, leaving the main road, and follow the road rising along the Göschenen Valley. Follow the road and pass some houses, until you reach the Ulmi parking lot on the left at about 1195 meters of altitude, in front of a wood with a signposted pole (Salbithutte). No parking fees, no road toll.

A well worn but steep path starts from here and with a 900 m vertical gain leads to the Salbit Hut SAC (Swiss Alpine Club), 2105 m, open in summer, situated near Salbitschjen.

Follow the horizontal path from the Salbit hut in direction to the South ridge, which can be seen in its full length. The ridge consists of several towers, choose the saddle below the leftmost tower. First, you walk over grass, nearing the saddle you will have a climb of grade III. Ca. 2600 m. 2 hours from the hut.

The first tower is the Salbitzahn 2728 m. It shows the first difficulty of grade IV. Then rappel to the Zahnscharte (2705 m). If you want to discontinue, you can either rappel to the Salbit hut side (ca. 60 m) or chose the easier Hug-Kurz route on the west side. The next tower is circumvented on its west side.

Climbing back to the ridge, you will be confronted by a flat wall that leads to the next tower (Plattenturm). At the end of this wall you must climb back (left) to the ridge. This lofty part is the most difficult of the south ridge. From the Plattenturm rappel to the next saddle, where you may join once more the easier Hug-Kurz route. On the ridge comes the next tower: Zwillingsturm. After this, it is an easy climb to the summit, where a solid granite needle of 15 m height awaits you for the finale.  5-8 hours from the Salbit hut. Rope. Normal climbing gear is needed. Rappel.

Descent leads down the north flank, on the snowfield turn right and head to a saddle that starts a stony couloir which leads gradually back to the Salbit hut. Easy.

From the Salbithutte descend to the plateau below and traverse halfway (keep down) on a trail in the direction of the South Ridge. Before getting it, head to the right and on blocks and snow-fields reach the amphitheater under the Zwillingsturm, between the South and East ridges (1 and a half hour). The attack is at the base of a large chimney on the vertical of a huge flat blade. 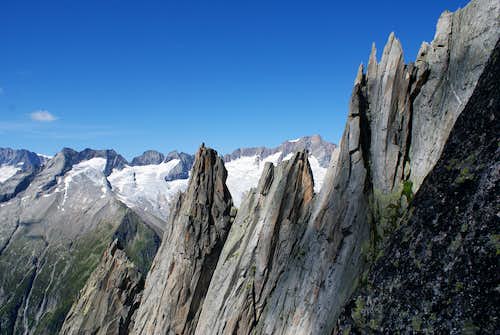 No particular restrictions in climbing and hiking.

Red spot: to the left the bivouac at the foot of the West ridge; to the right the Salbit hüt

Take the train to Göschenen (northern station of the Gotthard railroad and automobile tunnel), walk 1 mile into the Göschener valley as far as Abfrutt (1195 m). You can park the car here, with no fees. The cable car that goes halfway up to the Salbit hut and is for cargo only; you can phone and let your rucksack (especially skis in spring!) transport up to 1680 m. The path to the hut is well marked and easy to find. This hut is suited for all Salbitschijen climbs, except for the west ridge. In spring it is a starting point for the Rorspitzli (3220 m) with descent to Meien (1300 m). 3 hours. Hiking path.

The bivouac can also be reached from the Salbit hut over the Zahnscharte (2710 m) of the Salbit south ridge. From the saddle go down and keep always somewhat to the right. You can see now all 5 towers, Tower I, where the hut is, is the lowest. Rappel.

Link for books and maps: Literature and Maps

See the Swisstopo Map with many interesting features. Upload is in a separate window.