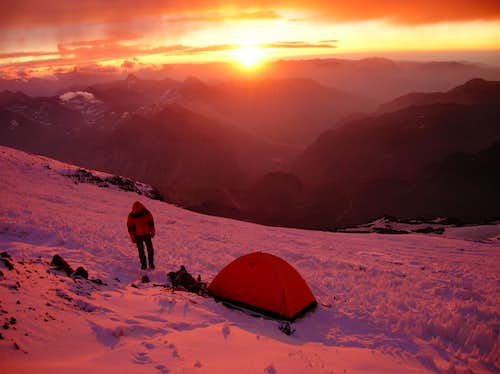 Volcan San Jose is of the big classics in the High Andes. Easily reachable from Santiago de Chile, it is popular with climbers from Chile and abroad alike.

For mountaineers the main summit is of most interest, the Plantat and especially the Engorda summits are seldom climbed. However, in winter the North Summit can be an interesting alternative, since the snow cover is higher then on the main summit, due to the different exposure to the wind.

1. The Ruta Normal: a technically easy tour, some snow and ice in the summer near the summit.

Volcan San Jose is a composite volcano, and part of a small eruptive mountain range that is about 8 km (5 mi) long, that also includes the minor summits Plantat I and II and La Engorda.

Santiago de Chile was founded in 1541 and Volcan San Jose is 70 km (43 mi) away. Since then, no significant eruptions were recorded. Historic records of activity a limited to permanent fumaroles sometimes with small pyroclastic columns.  Increases of this activity was often associated with major earthquakes - like the 1906 Valparaiso-Santiago earthquake (Magnitude 8.4). During this event also an explosion on the central crater was observed.

Despite this small volcanic activity, there is a possibility that Volcan San Jose is close to an explosive eruptive cycle, with characteristics similar to the eruption of Pinatubo (Philipines), where no eruptions had occurred for 600 years.

The volcano represents a risk to the people of the Maipo valley and the 4.5 mio people of Santiago de Chile, but also to the Argentina side. Villages are further away from the volcano here, but the largest glaciers can be found in the wind shadow on the Argentine side and pyroclastic material and gases can be transported far into Argentina by the wind (the wind mostly comes from the West, from the Pacific). 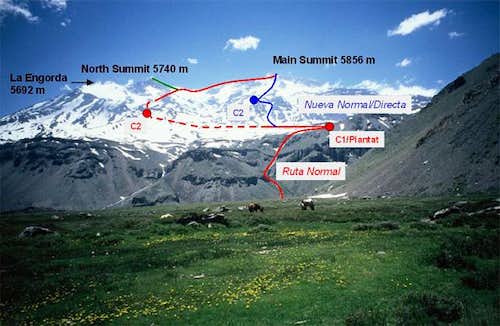 Your starting point is the valley "Cajon del Maipo", popular recreational area for people from the Santiago region.

There are buses running from Santiago into the Cajon del Maipo.   In winter it goes only as far San Gabriel, in late spring and summer all the way to the end to Lo Valdes at about 1850 m (6070 ft).

If you only get as far as San Gabriel, hitch-hike further into the valley. Patience is the key, but it works, even in winter.

Every once in awhile jeeps go up there. Rise your thumb, try your luck, often it works and you can save yourself a walk on a dusty road used by mine trucks (the trucks are not allowed to take you. On the way up they occasionally still do so, though!)

The departure place of the bus to Cajon del Maipo has changed recently.
Departure used to be every 30 min from Estacion Central, now it leaves from La Florida on the east end of Santiago, every 30 min, first bus at 7:30. You can easily get to La Florida with metro.

I will try to get updated information about that and post it, since that changes occasionally.

The Tourist Information (SERNATUR) has repeatedly passed out WRONG information about the buses. They have good information for the average tourist, but not for climbers. This is by the way the case all over Chile, with the notable exception Copiapo.

November can sometimes still have quite large amounts of snow, depending on how much snow fell in the winter. Short-skis are probably the best bet here.

Register with the Carabineros (police) at their station in San Gabriel. This is somewhat mandatory - regulations here change from year to year, but they constantly get stricter.

Their station is at the end of the village towards the mountains.

If you intend to do mountaineering or trekking in the area around Cajon del Maipo/Volcan San Jose, I suggest getting the map "Cajon del Maipo" (1:250 000; Nr. 3300-6900) from the Instituto Geográfico Militar in Santiago de Chile, or one of their more detailed maps in 1:50 000.

IGM maps are quite detailed. However, roads are sometimes not correct, important for those who intend to go travel by 4 WD or motorcycle. Get in this case additionally a good road map in Chile

Camping is allowed anywhere on the mountain.

Hide your stuff!
I have been to San Jose twice and had things taken from camp twice. hide things well the locals know the valley like the back of there hand, I don't recommend camping anywhere below the refuge.

The german refuge just outside of Banos Moralas is great for beer and food after the climb, be sure to meet the german shepherd dog it's been up all the major peaks in the area. 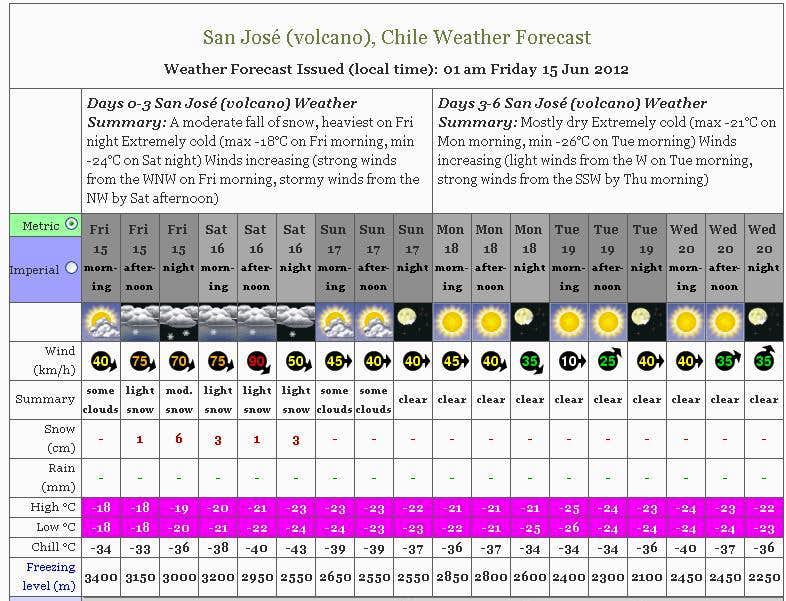 To hike/ climb is a dangerous activity and requires proper equipment and clothing, the owner of this page cannot be blamed by injuries caused to anyone who read this page for its info about the mountain and eventually got hurt by doing so with reckless behavior or bad weather conditions.

The biggest Brazilian website about climbing and mountaineering, for which I'm a columnist: