The 2,208 hectares of land divided between the Provinces of Belluno and Trento, make up the Marmolada system, known as the Queen of the Dolomites. This system includes the highest peaks in the whole region, among them Punta Penìa, at 3,343m above sea level, the highest mountain in the Dolomites Unesco World Heritage Site, making this system unique for the beauty of its landscape.

Separated from the Sella chain by the Cordevole and Avisio valleys and bounded to the south by the Biois mountain stream and the Rio San Pellegrino river, the Marmolada chain marches on toward the west in the shape of Cima di Costabella, the Monzoni chain and Monte Vallaccia. The system can be divided into two sections, the southern section with Cime d’Ombretta (2,983m), Sasso Vernale (3,054m) and Sasso di Valfredda (2,998m). The highest peaks, Punta Penìa, Punta Rocca (3,309m), Punta Serauta (3,218m), Gran Vernel (3,210m) and Piccolo Vernel (3,098m) are in the northern section. 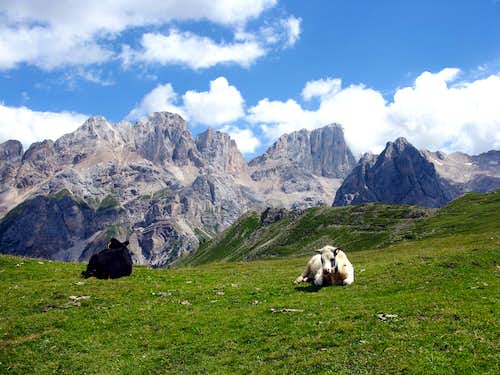 Take the road that leaves from Pozza di Fassa and leads to Valle dei Monzoni. When you get to the junction by a little church continue left following the signs to Valle S. Nicolò and drive to Ciampiè Hut, just before you find a car park. Here our hike starts. In this wide and sunny valley there are nice huts, while in the background you see the rocky Costabella crest, Cima Uomo and the triangular Col Ombert.
After a 45 min. walk you reach the Cascate Hut; stop for a while before climbing to the Refuge Passo S. Nicolò (2300 metres). It takes about 1 hour. What an enchanting view on the Marmolada group! Further on you can see the Sella group (in the north) and the Catinaccio (in the west). (www.dolomiti.it)