Sandstone Peak is the highpoint in the Santa Monica Mountains of Southern California. It is also known as Mount Allen, a name that was given and used mainly by the Boy Scouts. During the 1960s, in an attempt to honor Circle X benefactor Herbert Allen, the Scouts petitioned the United States Department of the Interior to rename Sandstone Peak. The request for “Mt. Allen” was denied because of a long-standing policy that prohibited naming geographical features after living persons.

Nevertheless, the Scouts held an “unofficial” dedication ceremony in 1969 to honor their leader. A plaque honoring Herbert Allen stands on the summit of Sandstone Peak. The peak is part of the Circle X Ranch of the western Santa Monica Mountains, an area that is administered by the National Park Service and part of the Santa Monica Mountains National Recreation Area. 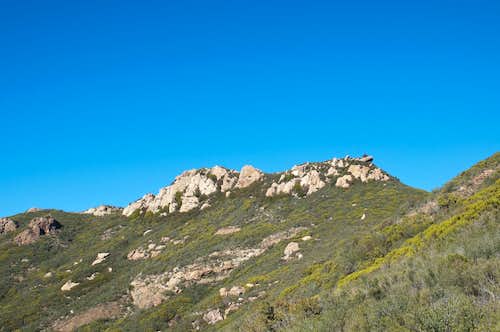 There are two main trails to the summit. The Sandstone Peak Trail, which starts from the Sandstone Peak trailhead off Yerba Buena Road about one mile east from the Circle X Ranch main house. This trail is about 3 miles roundtrip with ~ 1,100 feet of elevation gain. The second, longer, trail is the Mishe Mokwa Trail, which is about 6 miles roundtrip and a total of ~ 1,400 feet elevation gain. The trailhead is a short distance further east from the Sandstone Peak trailhead on Yerba Buena Road. Both trails are in very good condition and well maintained. To reach the summit of Sandstone Peak a short but fun scramble over reddish, volcanic rocks (not exceeding class 2) is necessary.

Sandstone Peak and the Boney Mountain Ridge can also be accessed from various locations within Point Mugu State Park and Big Sycamore Canyon to the west. Those approaches are longer, mostly all-day hikes to reach the summit.

The views from the summit are breathtaking and far-reaching on a clear day. Mount Baldy in the San Gabriel Mountains to the east, Los Padres National Forest to the north, the Pacific Ocean to the south, and the Channel Islands (Anacapa, Santa Cruz, Santa Rosa, San Miguel, and Santa Barbara) to the west.

About 24 million years ago, the area of the present-day Santa Monica Mountains was just a broad plain that extended from the middle of California to the coast. In fact, much of the land that makes up the Los Angeles area was underwater at the time. Then a short period of time later, geologically speaking, about nine million years, the volcanoes that created the Santa Monica Mountains and the Channel Islands started to erupt, however, the lava only oozed underwater at first. Yet about 15 million years ago the eruptions became explosive. Volcanoes similar to the eruptions of the Cascades in Washington and Oregon or the Andes in South America were a common occurrence. For another 3 million years, the mountains continued to grow to over 10,000 feet high. Three times taller than they are today!

Sandstone Peak is in the Conejo Volcanics Formation (16.1 to 13.1 million years old) and is composed of igneous rocks that include dacitic breccias, andesitic breccias, basaltic breccias, andesitic flows, and basaltic rocks. After 13 million years of erosion, the amazing 10,000’ Sandstone Peak is a mere 3111’. The remaining colorful, reddish rock is the heart and core that gives us evidence for a process millions of years in the making!

Take Pacific Coast Highway to Yerba Buena Road in Malibu. Follow this road for about 5.5 miles or until you are about 1 mile east of Circle X Ranch. Park at the turnoff near Triunfo Pass.

Take Westlake Blvd off of the 101 Freeway. Follow it south until it merges with Mulholland Highway. Turn right onto Little Sycamore Canyon and it will become Yerba Buena Road as you cross the county line. Proceed on Yerba Buena Road for about 4 miles to trailhead or about 1 mile before the Circle X Ranch Ranger Station.

No permits required for this hike.

Sandstone Peak can be climbed all year. The best months probably are October through June with clearer views. Summer tends to be quite hot despite the proximity to the Pacific Ocean.