The Padon Ridge located close to the geographical centre of the Dolomites appears to be completely out of place. While the surrounding "pale mountains" are made up from dolomite or limestone rock and often dazzle brightly, the mountains of the Padon Chain put up a stark contrast with their black summits posed above brightly green meadows. The crest is made up from volcanic rock - you see black basalt and lava or tuff formations - and thus tells a story about the geologic upheavals which created the Dolomites ages ago. Indeed, the Marmolada Group, of which the Padon Chain is the northernmost part of, includes at least two other volcanic ridges: Buffaure and Monzoni. But nowhere is the volcanic heritage as pure as here.

The Chain divides in two parts, a grass-covered round-topped western part and an impressive basalt section in the east. The western part of the chain is best known for its Bindelwg hiking trail (Viel del Pan in Ladinian) which runs from Passo Pordoi to Porto Vescovo to the south side of the ridge and which is visited by crowds of hiker during the summer season. A less known and far more difficult trail (called Alta Via della Cresta) runs across the proper ridge, touching most of the summits on a steep and often exposed path. Right in the middle of that ridge a small piece of rock stands out: Sass Capel (Sasso Capello in Italian).

Sass Capel is an almost circular outcrop on top of the meadows which make up most of the Padon Chain in this part of the ridge. Unlike its neighbours it is bounded by vertical walls on all sides, walls that are low (30m) in the south but much higher in the north and east. Even Alta Via della Cresta does not lead to the summit of Sass Capel but rather passes by on the southern side. From there a traverse through the south face and the climb of a short chimney take you to the plateau on top.

Sass Capel's location in the middle of the Padon Chain couldn't be better. Wedged between the Marmolada Group in the south and the Sella Group in the north, it still offers wonderful views towards the groups of both the western and the eastern Dolomites as well as the Zillertal Alps in the far north. Thanks to the mildly difficult ascent route you'll usually find only few people on top adding to the enjoyment.

In general the mountains of the Padon chain also look like good tour skiing destinations. However, the south sides of the chain are avalanche prone and the most dangerous section is right at Sass Capel. There huge funnels have been installed, to induce avalanches by small explosions. To come across one on these funnels while it is firing jets of flame is dangerous in itself. 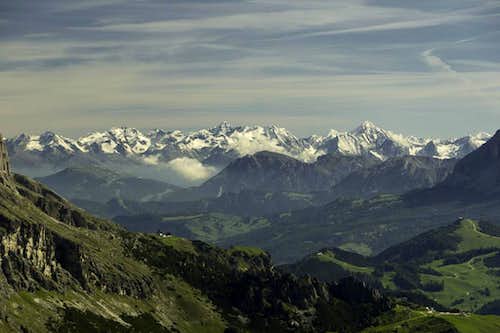 There are several possible trailheads for Bindelweg and Alta Via della Cresta.