Sawtell Peak has a commanding position in the Yellowstone gateway area of Island Park and Henrys Lake. Island Park is a beautiful area that contains two large lakes, the Henrys Fork of the Snake River, two Idaho state parks, and numerous recreation opportunities throughout the year. Many vacation homes are located in the valleys below Sawtell Peak, and due to the popularity of the area, many people visit the summit of Sawtell Peak. 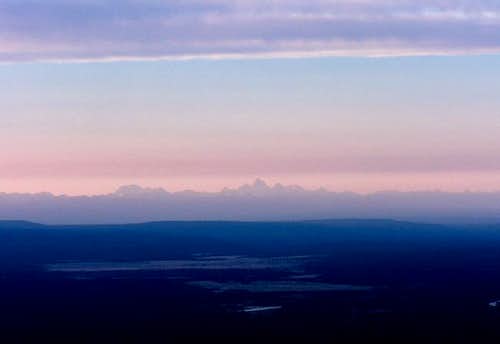 The Teton Range at Daybreak from Sawtell Peak

Named after Gilman Sawtell who was the first settler in the area in 1868, Sawtell Peak forms the eastern end of the Centennial Mountains. The Centennials are unique in that they run west to east, unlike most basin and range fault block ranges in the region. This is most likely due to the movement of the Yellowstone Hotspot, which 1.6 million years ago formed the Island Park Caldera, one of the largest in the world, and is directly to the west of the Yellowstone Caldera. The range formed parallel to the movements of the Hotspot in a lever action as the weight of new magma pushed down on the southern slopes of the range.

The peak is also in a central location for the Federal Aviation Administration, which operates a flight traffic control radar station near the summit. Because of this, there is a well maintained road to the top, the route that most visitors will take.

The summit elevation is taken from a survey disk set at the highest point on the mountain. You can read more about its details at this page provided by Geocaching.com.

Thanks to D Smith for developing the SummitPost Mountain Map Generator 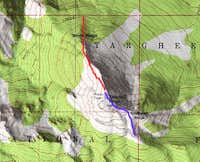 This is obviously the easiest and most traveled way to the top. Any other routes to the top are virtually people-free other than this one. The road is well maintained gravel and passable by all vehicle types during the summer months. The entrance from US-20 is signed and located at the entrance to the Sawtell Mountain Resort. After passing through some summer home developments, you pass a gate and head up the mountain. From the highway to the summit is about 10 miles. Drive with care as this is a mountain road with hairpin curves and dangerous dropoffs.

As other climbing and hiking routes from any other direction are more serious of an endeavor, those wishing to summit on foot can take this variation of the road. Park at the first east-facing switchback above timberline. There is a cut-way portion of rock on the outside of this curve. Park under those rocks. Follow the obvious ridge up past two more switchbacks and radio facilities. The last bit to the summit will pass through a pleasant alpine meadow.

Many variations are available on the south face of the mountain, but many will intersect the road. Day hiking opportunites are abundant along the road.

Approaches on the north side of Sawtell peak include more dedication, longer approaches, steeper and more exposed climbs, and grizzly country. There are no trails directly on this side of the mountain. Access is available off of the Rock Creek Basin Trail, accisible from Redrock Pass Road, to the south of Henrys Lake. This is grizzly country, so take the proper precautions.

The Federal Aviation Administration closes Sawtell Peak road from November 1 to June 1. Snowmobiles are not allowed up the road in the winter, nor is snowshoeing and cross-country skiing.

The road is actually maintained by the FAA during winter months. However, this is only for personel associated with the facilities on the peak. During the winter the snow can be as deep as 25 feet on the mountain, and avalanche conditions are always dangerous on all aspects.

Summiting is not allowed during the winter (see when to climb.)

Being a federal facility, do not enter any areas that are signed or gated. Since Sept. 11, security has increased at these facilities, so be sure obey any signs and do not trespass. Other facilities are either private or federal property.