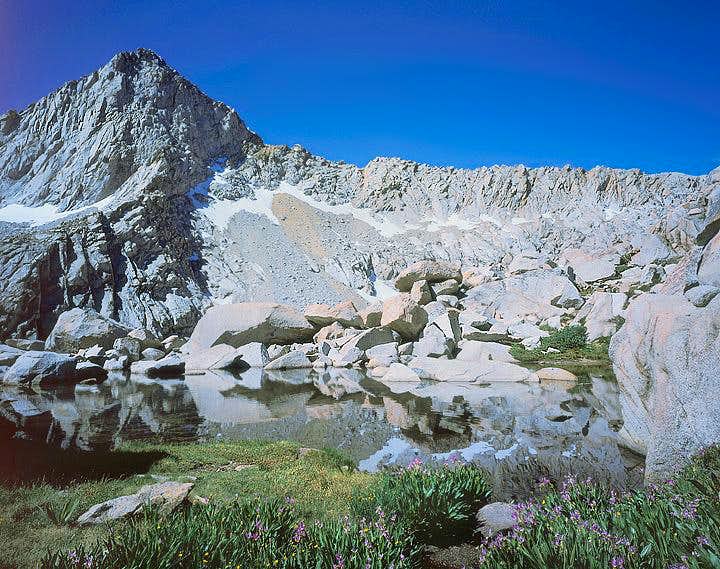 ...mouse click to enlarge... This image of Sawtooth Peak was taken about 8:45am July 7, 2007 between good sized Columbine Lake and the smaller unnamed lake north at a small shallow tarn on the stream between the two. Shooting star, dodecatheon jeffreyi, have colonized the moist stream soils of this small stream that usually lasts through summer. Pan sized eastern brook and rainbow trout are abundant in the pond and other two lakes. I exposed the 4x5 transparency sheet of Provia 100F film with my 90mm Caltar lens at about EV14.8 at 1/8 second at f/42. A bit of trivia about Sawtooth Peak at 12,343 feet is that it and other peaks of the Mineral King section of the Great Western Divide can be seen 30 miles west from the Central Valley near the town of Woodlake elevation 450 feet amid that areas vast orange groves or a vertical relief of about 11.9k feet. Those views are best during the typically clear air after winter storms pass leaving those peaks glistening white against late afternoon deep blue skies. That relief is an exception to the dominant situation of mountains of the Sierra Nevada's west slope rising gradually. It is over 1000 feet greater than Mount Whitney's 10.8k feet rise from the Owens Valley town of Lone Pine. However Lone Pine is only 13 miles away so Whitney's rise is considerably more prominent. ...David Senesac http://www.davidsenesac.com
« PREV NEXT »