The view on Schatzbühel (right) from the S, from Mukulin
The most common writing of the name of this mountain in Gailtal Alps, Lienz Dolomites, is Schatzbühel. But on the maps and on the web you can find Schatzbihl as well.

The easternmost part of Lienz Dolomites is much lower than the central part and is also made of different rocks (limestone and dolomite is not prevailing so much). That's why those summits are rounded, grassy and less attractive from the distance. Schatzbühel is the highest summit in the area, but, interesting enough, the neighbouring grassy ridge, called Auf der Mussen, is far more popular. The reason is not in the hiking attractiveness or panorama, in both these Schatzbühel is surpassing Auf der Mussen. The reason is abundance of flora on Auf der Mussen, which resulted in establishing a natural parc there. Luckilly, we can combine both on a nice hike, visiting them even on a fine round hike.

Schatzbühel is connected with the remainder of Lienz Dolomites with a broad, grassy ridge, lowering first on a saddle cca 1900 m, where Mukulin Hochalm (alpine meadow) lies, and then continuing further towards the west over Schartenkopf, 2025 m. Towards the NW, the slopes of Schatzbühel are lowering into a ravine which finally gets down into the valley of Pirkrer Bach. Below the summit is Postmeisteralm, cca 1725 m. Towards the NE, from the summit a nice grassy ridge goes on Point 2052 m (Joch), where it turns eastwards and lowers just down into the main valley of Drau, reaching it south of Oberdrauburg. Towards the south a short ridge goes on the nearby summit of Mukulin, 2038 m. That one already belongs to the Auf der Mussen area and from it the grassy main ridge continues eastwards just to the Gailbergsattel, where Lienz Dolomites end. South of the summit of Schatzbühel there is on its slopes first the Lower Mukulinalm, 1487 m, then the slopes lower down into the distinct Podlaniggraben. 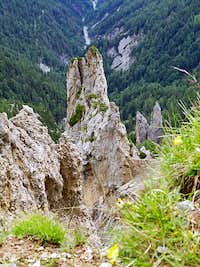 An eroded tower
Finally, one more feature of Schatzbühel must be mentiones. That is the wild ravine of Gailbergbach (in the lower part called also Silberbach). It is cut some 4 km, reaching from below Gailberg Sattel westward the saddle between Schatzbühel and Mukulin. The ravine is completely barren, eroded, only some picturesque rock towers are still resisting erosion. A very picturesque scene from the sadle below Schatzbühel! Above Oberdrauburg Silberbach makes a nice canyon with a few picturesque waterfalls, arranged for tourist visits.

Schatzbühel is first of all a nice hiking mountain. Marked paths are reaching it from at least five different directions, with some additional possible variants. Rounded tours are also possible. Among them certainly the most attractive is the one, which includes also the visit of Auf der Mussen. Regarding flora itself, it is on Schatzbühel still very rich, but not any more so abundant as on Auf der Mussen. Lower parts of tours can also be done with a mountain bike, using mountain roads and cart roads, reaching alpine pastures.

In times of tour skiing, the summit is also a nice goal of a ski tour.

Towards Carnic Alps
The panorama from Schatzbühel is very broad and nice. Personally, I can hardly decide if more scenic is the view on the highest summits of Lienz Dolomites on the W and NW, or the view on the long chain of Carnic Alps with its highest part just across the valley of Gail. In Lienz Dolomites we see best the nearby Hochstadel, from behind wich also some other highest summits of the groups are peeking. On the left is the nearby Lumkofel.

Across the valley of Gail we can see most of main mountains of Carnic Alps main range - on the west from Großes Kinigat, over Monte Peralba, Volayer group, the group of Hohe Warte / Monte Coglians, to the eastern part, starting with Polinig and ending with Ojstrnik. From behind Carnic Alps main ridge we see Sexten Dolomites, other high summits of Carnic Alps, Julian Alps and Karavanke.

Towards the east Gailtal Alps are running. It is interesting to see both long valleys delimiting them: Gail on the right and Drau on the left.

Towards the east - Gailtal Alps between Drau and Gail valley
North of the valley of Drau the whole Kreuzeck group is in front of us. Left of it, towards the NW, we finally see also the summits of Glockner group, with Grossglockner itself, and Schober group.

Schatzbühel is mostly visited from the south, from the valley of Gail (called there Lesachtal). The reason is the nearby Auf der Mussen and also the fact that two mountain roads (payable) can bring you high on alpine pastures. But here are the main trailheads on all sides.

On the southern side:

On the northern side: 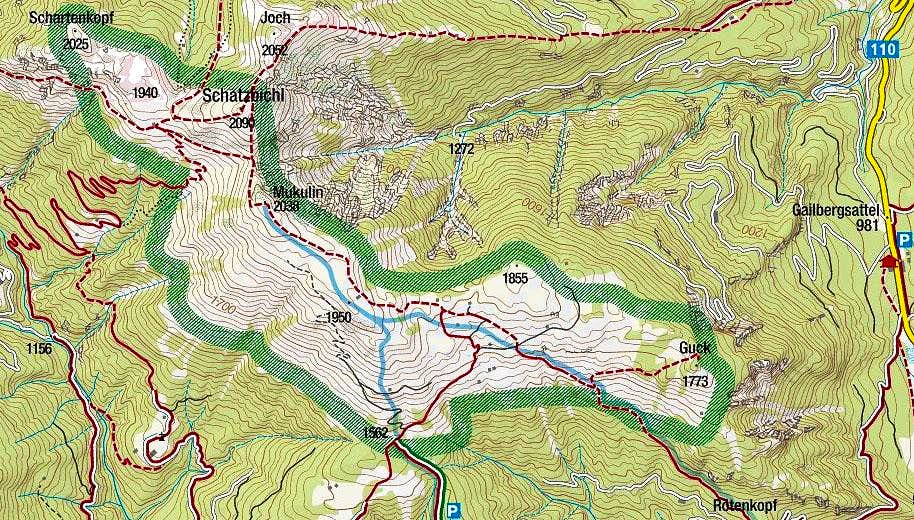 I guess this is the most often used approach on Schatzbühel today. Those who ascend Auf der Mussen only to admire its flora, will probably not continue. However those who ascend the ridge to do a nice hike, will not have enough to do only the Mussen - continuing those 30 minutes more on Schatzbühel is more than rewarding. You gain a higher, a bit better panoramic point and half way you can admire the view down into the wild ravine of Gailbergbach valley. From the end of the road from St. Jakob, 1500 m, it's less than 2 h 30 min to the top and the path is easy (T2).

If we start in St. Jakob, we go by the mountain road and the path No. 225 (takes some shortcuts) towards the north. After some 6 km (1 h 30 min), on 1500 m, there is a big parking place. Soon above it you are already out of the woods. You best ascend by a cart road in the NE direction and then turn slowly left on the main ridge. Great scenes on those meadows! From the cross on top of those meadows the marked path goes towards the W and NW on Mussenhöhe and Mukulin. From there the path descends some 50 m towards the W, after which it crosses right, slightly descending across the slopes on the saddle between Mukulin and Schatzbühel.

From the saddle you continue directly towards the top. The grassy slope is steep, so the path first crosses a bit to the left, then right back and then more or less follows the S ridge to the top.

This round tour is much longer and can be done either in a clockwise or counter clockwise direction. Parking places are on 973 m (Podlanig) or 1033 m (Kornat). In the whole tour we shall do some 1400 m of altitude up and the same down. All sections of the route are easy (T2, mostly T1). For the whole round tour allow some 7 h 30 min.

If we start in Kornat, the path first leads us into the valley of Podlanigbach. After we reach the creek, we continue along it, then cross it (bridge) and just before the second bridge we turn righ, away from the creek, ascending by the slope to Mukulinalm. This alpine pasture lies on 1487 m. From it, we continue in the same direction, towards the NE. Schatzbühel is just in front of us. The path first reaches the saddle west of it and then continues on top. Good 3 h till here.

From the summit of Schatzbühel we continue as described on the previous tour - towards Auf der Mussen ridge. First we steeply descend on the southern saddle, then cross the W slopes of Mukulin, ascend on it and continue towards the SE and E - as long as we wish along the nice, grassy ridge (Auf der Mussen). From the middle of the ridge a cart road goes down towards the parking place of the road from St. Jakob. But before reaching it (on the lower border of meadows), we must deter right, to Jägerhütte, 1562 m. From there, a marked path goes towards the SW, over Lumwiesen and then southwards down into the village of Podlanig. Then by the road to our cars.

A marked path goes on top of Schatzbühel by its east ridge, from the hamlet of Gailberg, 1000 m. From Oberdrauburg till there must be 1 h of walk, further on top 3 h more.

This is just passing from the central part of Lienz Dolomites to the eastern part, not an independent tour on Schatzbühel. From the hut we first descend good 400 m towards the SW (into the Pirkner Bach valley) and then cross towards the SE, first on Schartenalm, 1523 m, then further on Schatzbühel. Some 4 h, easy route.

In the narrow area of Schatzbühel there are no official mountain huts, but in private huts and shepherds huts you can get food and drink.
Hochstadelhaus, 1780 m, can be a starting point, but it already belongs to another mountain group.

The ridge area Auf der Mussen (see the map above) is protected as a natural parc.

If we combine the ascent on Schatzbühel with the visit of Auf der Mussen, then no doubt you should almost exclusively come in the times of mountain spring. That is from June till mid July. Otherwise, Schatzbühel can be ascended any time of a year. In winter conditions a ski tour is recommended.