Rating the Tour (by hiking standards)

0. General: 1976 m to 2964 m, exposition E and SE, marked. Best time for the ascent is early summer (useful snowfields for a descent) and all the rest of summer and autumn. This is also a nice ski tour. Just below the summit a very short, secured rocky passage. On the Swiss Hiking Scale the route difficulty would be graded T3. Gear: Just good shoes, poles.

You start the tour at Luener See dam, it means at Douglas Huette or the upper station of cable-car (see the parent page). 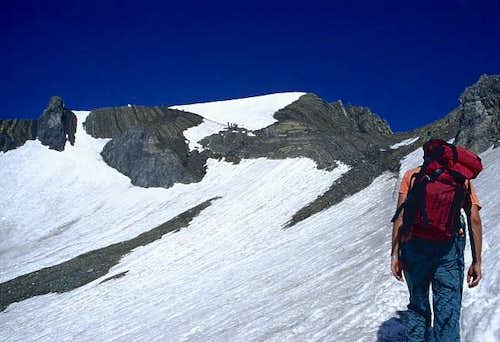 Below the summit of Schesaplana

From Douglas Huette or the upper station of the cable-car you first go along the shore of Luener See. After some 20 minutes a good marked path deters rigt, ascending gently over a grassy terrain below Seekopf towards the WSW and then towards the NW to Totalpsee. Above the lake there's Totalphuette, 2381 m.

From the hut we continue in the western direction over the plateau of Totalp. The path is good and well marked. When reaching the summit slopes at some 2700 m, the ascent gets steeper. We cross the slopes northwards and reach a basin some 150 m below the summit. Keeping on the right we traverse it and (picture left) ascend up on the summit ridge, where a very short passage in rock is awaiting us. But it is secured and causes no problem. Then we just follow the ridge towards the north and reach the summit.

On the descent (by the same route) it's a big fun to use snow fields, which lie around the path also in early and mid summer. You can slide down very quickly and reach the Totalphuette in a bit more than half an hour.