Sitting high on the slopes of Green Mountain and nestled between the mighty Fourth Flatiron and the Fifth Flatiron, Schmoe's Nose sits in plain view. It is a steep and narrow fin of a Flatiron, marked by a distinctive "nose" partway up. This feature gives it a comical appearance and it truly does look like a face with a large schnoz from just about any angle. Due to it's well-known neighborhs and general inaccessibility, Schmoe sees a fraction of the traffic of many other Flatirons. Healthy lichen dots the slabs and fragile holds still lurk waiting for a careless tug. It's base is guarded by a see a thick shrubs, thorny bushes and a see of poison ivy and the approach is arguably the most difficult part of the climb. It's unique shape and unusual climbing should put this on any Flatiron lover's list and it's well worth the trip.

Schmoe's Nose is nestled among the others.

Getting to the base of the rock is probably the crux and is definitely the least pleasant portion of the climb. There are two viable options and both have their ups and downs and I will discuss both. Either way, you will follow whatever trail you prefer just like you would to reach Royal Arch. A good description to Royal Arch can be found on ProTrails.

Approach #1 via Tangen Tunnel
The first and seemingly most logical choice is to approach through the Tangen Tunnel. This route makes perfect sense if you are looking for the most direct route but the smaller mileage comes with a heavy price. The Tangen Tunnel route ascends all the way to the summit of Green Mountain through some of the worst terrain in the Flatirons. This has the notoriety of being the nastiest bushwhack in the area and can be challenging in any season. Snow makes the several scrambling sections become treacherous and icy and the summer warmth causes an army of poison ivy to amass. If you want the shortest approach, follow these directions taken from the Summitpost page on Tangen Tunnel...

"Park at Chautauqua on Baseline. If the lot is full there is usually street parking within walking distance. Gregory Canyon parking as well as other parking locations could work but I will describe from Chautauqua since it's free.Follow the Royal Arch trail to Sentinel Pass (it is well marked). Continue down towards the arch until the trail starts uphill again. You will go up some steep wooden steps with a neat little cave/alcove on the right and then up some rocks that flow with water at certain times of year. Look sharp here. Past a slab (the start of the Fourth Flatiron) and before the next rock (Lower Tangen Tower) there is a gully that leads up. This is Tangen Spring and water comes down here part of the year.

Head up between the rocks and enter the cave. At the back there are a series of steps that spiral up and exit the cave higher up. This is the Tangen Tunnel and is a neat place to be. The "steps" are class 4 maybe 5.0 (the last one has a bit of exposure) but are very doable without a rope. The exit looks like a small hole from above."

From above the Tunnel, simply batter your way uphill while staying close to the Fourth. There will be several sections that require some 3rd-4th class scrambling. Just when all will seem lost, you'll arrive at the base of Schmoe's Nose. The formation is obvious from below due to its unique shape.

This would be a TERRIBLE descent route! 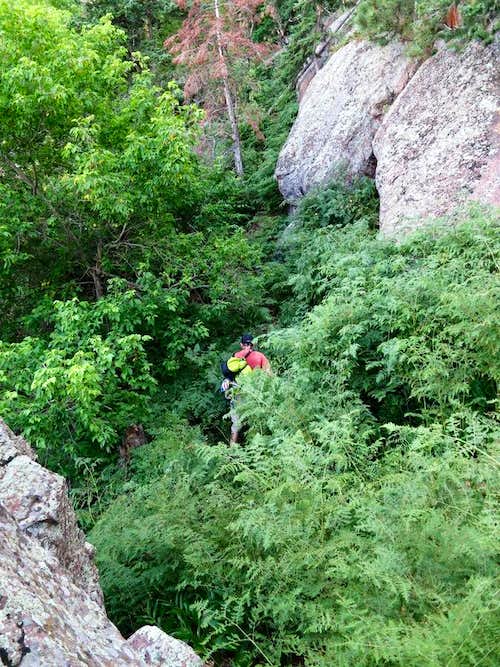 
Approach #2 via the Fifth Flatiron
Although this route is a bit longer and wanders a bit, it lacks most (not all) of the horrendous bushwhacking of the Tangen Tunnel route. It takes advatage of the decent climber's trail that comes down from the top of the Fifth but does involve a bit of battering to get over to Schmoe's Nose. Start by hiking all the way to Royal Arch. Immediatley before the trail heads up into the arch, take a faint trail that branches off to the right (uphill). Once you are on it, it is mostly easy to follow and heads up the south side of the Fifth. Eventually, you will arrive beneath the unique pointy summit pinnacle of the Fifth and should be able to look due north to see Schmoe's Nose. Simply pick the line of least resistance and batter your way over to the base of Schmoe.

This should be considered the descent route of choice. 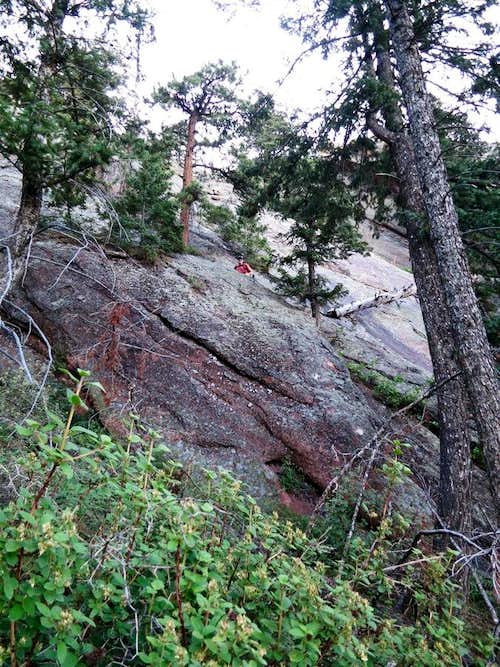 Base of Schmoe's Nose through the foliage.

There are several routes on Schmoe's Nose, but there is only one route that gets climbed on a pseudo-regular basis and it is considered the standard route.


P0 - 5.2 - This is not part of the route but is the best way to access the route. Consider this an "approach pitch" and could be soloed without too much trouble. Instead of bushwhacking up the side of Schmoe to get to the climbing, it's best to get on the rock as soon as possible and lead a longer pitch to belay at a small tree right where the face becomes more clean and distinct. The distinctive nostril overhang will be very obvious above you. Look out for pine needles! 150' 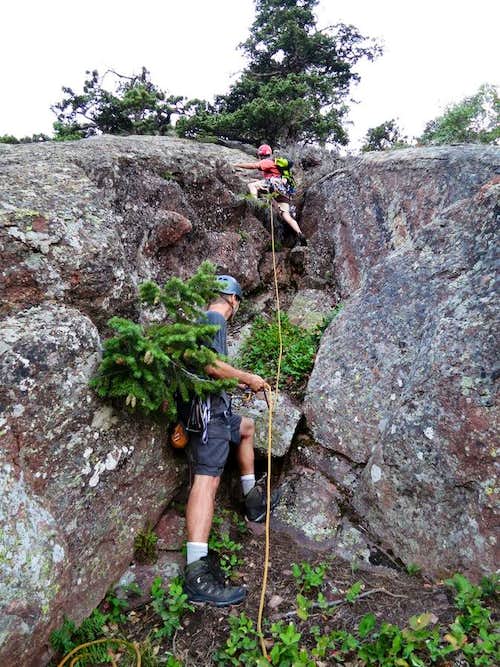 We scrambled up and started climbing here. 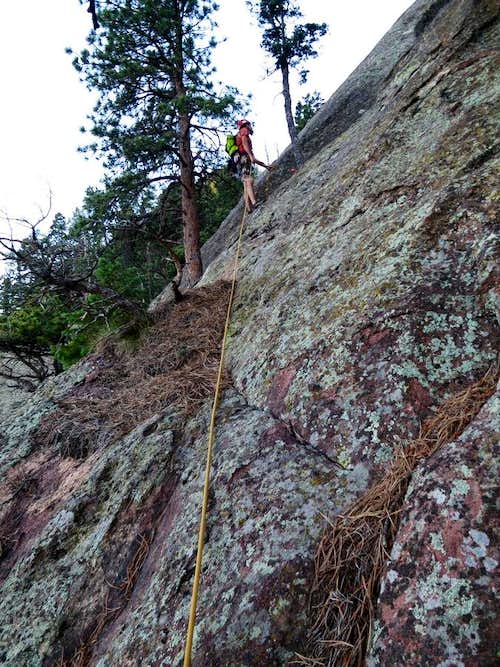 This is the end of the "approach pitch" at a nice tree belay.

P1 - 5.4 - Work up the right side of the formation following the path of least resistance. Resist the temptation to traverse left too soon, and continue climbing up the edge until you are level with the bottom of the nose. Traverse horizontally across the easy but smooth slab to reach the nose, and move up 10 feet to belay in a small crack in a seemingly detached flake. 150' 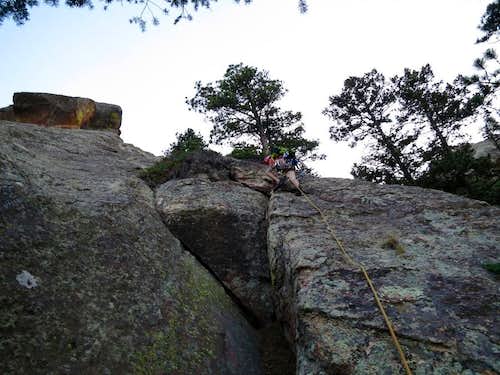 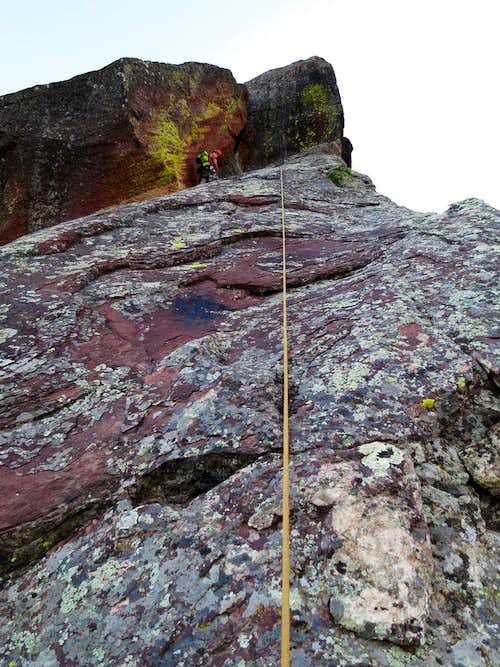 P2 - 5.6S - Clip an old piton and make a few thin/licheny moves until you are staring up into the nostril. Place a large cam, grab a booger, and levitate up and through a small nostril (pack will get stuck!) into a comfortable alcove. Step high and climb the thin, runout face above to reach a nice notch immediately below the summit. 180' 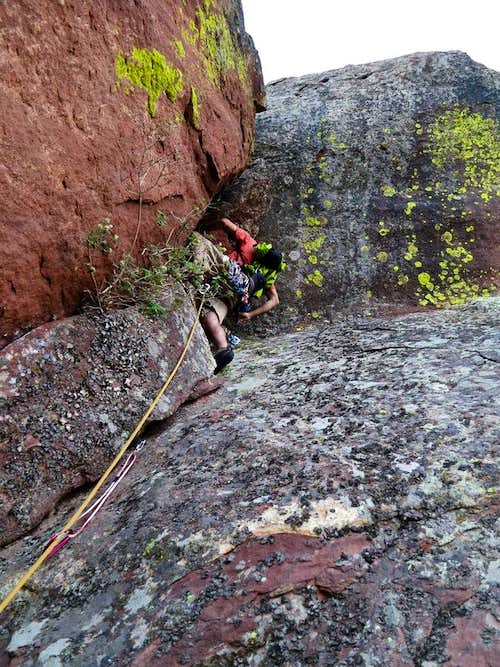 Grab a booger and pull through the crux. 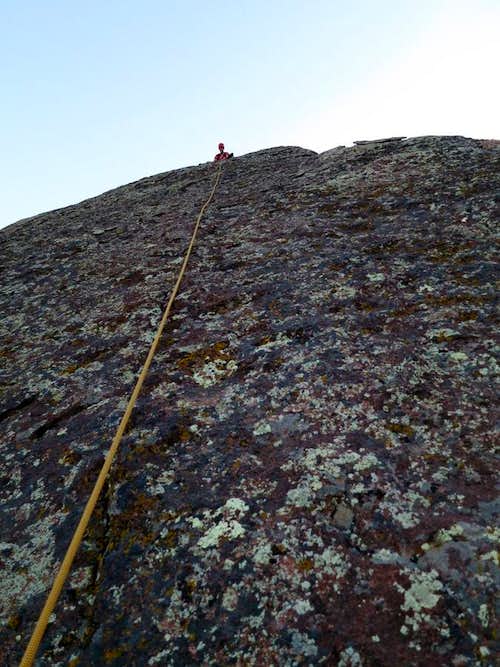 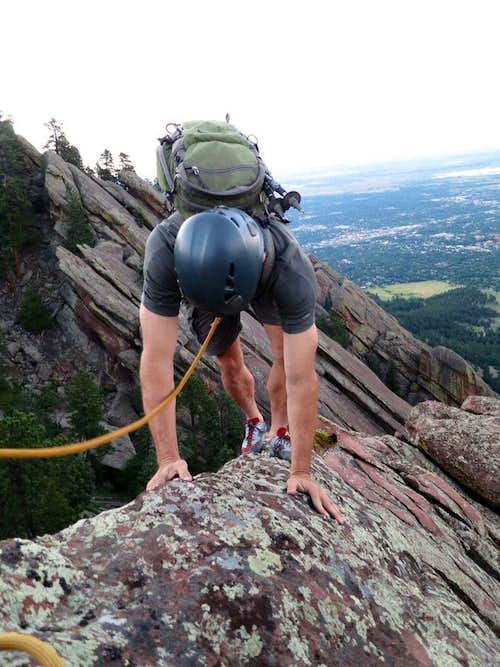 **Route photos all by Otina. THANKS!

Descent: Either rappel 60' west from the summit boulder, or if it looks to sketchy for you, down-climb to the notch and rappel 60' north from a slung constriction in the notch. Hike around and up the north side of the outcropping immediately to the west of Schmoe's Nose, and work down rocky gullies (don't get cliffed out) between Schmoe and the Fist aka Hippo's Head. This is tricky in the dark! Aim for the obvious Fifth Flatiron below, and find/follow the obvious climber's trail down the south side of the Fifth all the way to Royal Arch. Take the Royal Arch trail out. 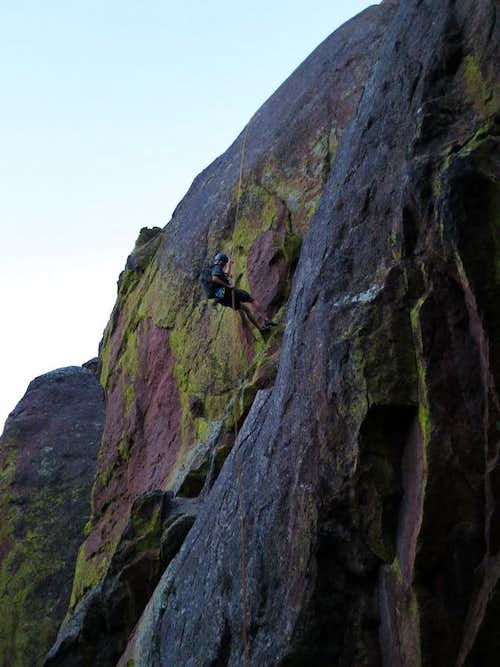 Although Schmoe's Nose does not fall under any of the regular closures, it's never a bad idea to check with the OSMP to make sure there isn't an unusual closure.

Check HERE to see the formation's status and see if any closures are in effect. Please be respectful of the closures.

Also, please only use clean climbing techniques so leave that hammer at home. This may seem obvious but I have discovered new pitons on routes.

This can be done during any dry spell anytime of the year. Snow can complicate the approach and summer can cause poison ivy. It's up to you!

There is no camping allowed in the Flatirons.

Here is a great interactive MAP of the area.

Here is a LINK to NOAA's weather site.

The OSMP website provides a ton of good information and can be found HERE.