Schneealpe is one of the three last high mountains in the eastern end of the Northern Limestone Alps, the one with the most remarkable plateau character with steep, mostly rocky faces. It consists of many peaks, which rise from the plateau with their mild grassy slopes. Due to its geological structure, the plateau falls down to the north, thus north and south sides of the mountain are very different. There is the quite steep and rocky face in the south, opposed by the long deep trenches and partly wide ridges in the north.

Besides the top, Windberg (1903m), the most important peaks, becoming most visits, are Schönhaltereck (1860m), Ameißbichl (1828m), Donnerwand (1799m) and Hohes Waxenegg (1647m). They are often ascended without going to Windberg, which would often be just a long flat walk, but in a nice landscape.

This small mountain range is not as crowded as are both Rax and Schneeberg due to the absence of a cable car and having just one hut up there. There is also no such a well known rock climbing location here as is the Höllental. But you can explore a wealth of marked and unmarked paths, especially on the north side, in summer, winter, or anytime in between. 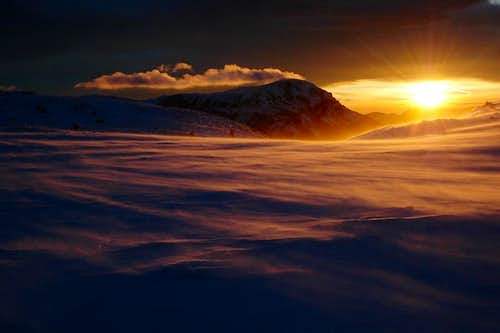 In the north, there are two main base towns: in the west - Frein an der Mürz, in the east - Hinternasswald. To get to Frein, exit the S6 highway at Mürzzuschlag and follow the way to Mariazell in the direction Lahnsattel. Hinternasswald is reached from the S6 through Gloggnitz and Höllental.

The southern routes start in Altenberg an der Rax, Kapellen, Neuberg an der Mürz and Tirol (not to confuse with Nordtirol & Südtirol :). Exit the S6 highway at Mürzzuschlag, follow the way to Mariazell and stop in the appropriate town.

All the routes on Schneealpe cannot be covered here, just the most outstanding ones shall be listed and commented on briefly. All the mentioned routes are easy walks.

As far as I know, there are no restrictions for walking, climbing, skiing and biking. No parking fees.

In winter, the climate here is much colder than that in the valleys of Rax and Schneeberg. You may need snow chains for your car.

All year, even when the avalanche conditions are sub-ideal. Check the avalanche bulletin at Lawine Steiermark for what you can do safely. Going to Ameißbichl in winter, one avalanche slope looking to south is to be crossed: go over Karlalm, if unsure. Lohmgraben is very endangered from avalanches, best to ski in the spring.

For avalanche conditions, see Lawine Steiermark. Weather forecasts are at wetter.orf.at and ZAMG.