Scott Hill is #30 on a list of the highest points in Salt Lake County, Utah, at 10,116 feet in elevation. This peak is fairly visible from the Brighton Ski Resort area, and is one of the southern most summits on the Wasatch Crest Ridge. The peak is easily accessible throughout the year from two points on the Guardsman Pass road, depending on the season. Other ascents can be made from the Wasatch Crest Ridge, and from the east as well. The views of the Central Wasatch from this peak are great, and this hike is perfect for a quick after work ascent. 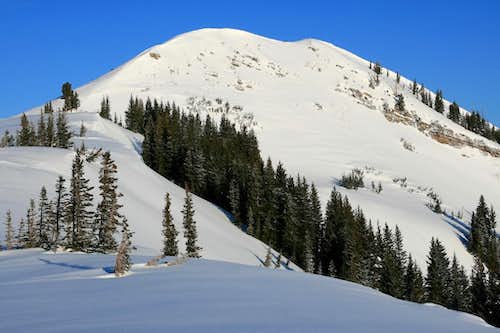 Scott Hill is also a landmark just north of the popular "Puke Hill" encountered by mountain bikers who start their route on the Great Western Trail from the Guardsman Pass road during summer months. This same route can be used for an excellent ski or snowshoe ascent. One of the more interesting features this little summit provides is the history of mining in the area, as seen from looking at the peak itself. Several large mine dumps are present, on almost every section of the mountain. Silver mining was very popular in both this area, Park City, and Alta during the late 19th - early 20th century. The actual summit rock composition consists of a very bright green slightly metamorphic limestone, part of the Thaynes Formation. The metamorphic properties of the rock were caused by pressure from the igneous intrusive body of Mt. Majestic further south. The rocks atop Scott Hill date 248 to 206 million years old, during the middle of the Triassic period in geological terms.

Once reaching the mouth of Big Cottonwood Canyon, drive approximately 13 miles up the canyon, passing the Solitude Ski Resort area. Just before reaching the Brighton area, take a very sharp left (east) turn at the Guardsman Pass road. Drive 1.15 miles to the gate after the road curves almost 180 degrees to the south. This gate is locked during the winter season, and this is the starting point for the route to the peak. Do not park in the turn around area near the gate or you could get ticketed. The main parking area is on the east side along the road about 75 yards north of the gate. Coordinates for this starting point are: 40.36700 N, 111.34633 W, 8,890 feet in altitude. From this point you have 2.61 miles and 1,226 feet of elevation gain to the peak. During the summer season you can drive one more mile from the gate area to a switchback on the road at 9,190 feet. This area has a tendency to be very popular in the summer season, parking could be somewhat limited. The coordinates for this location are: 40.36826 N, 111.34241 W. From this starting point you have 1.6 miles and 926 feet of elevation gain to the peak. Both of these starting points have lavatories available. No running water. 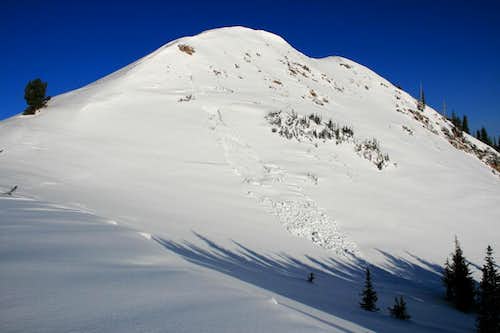 There are no fees required in this area. Parking may be limited or hard to find during summer months, as this area is very popular with mountain bikers, and other enthusiasts. Big Cottonwood Canyon can see road closures during a heavy winter storm, and all wheel drive or chains may be required, though not often. Attention should be paid to current avalance conditions during the winter season, please check out the Utah Avalanche Center link here for the most current updated information. 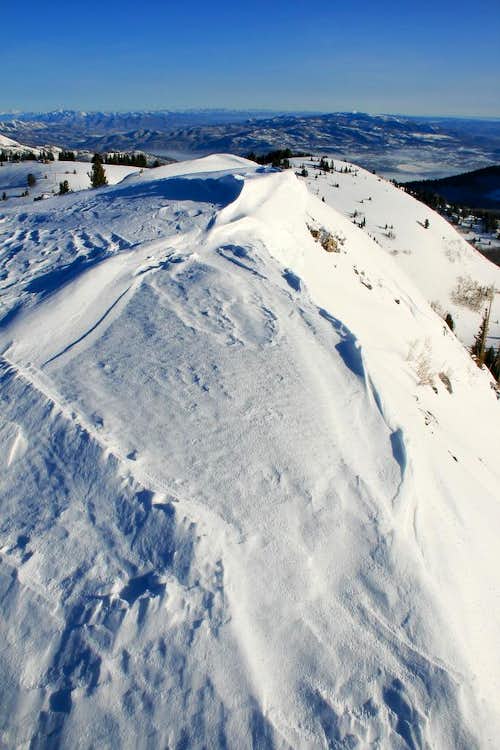 From the summit looking north.

The Spruces Campground is located 4.25 miles down Big Cottonwood Canyon, it requires a fee and is generally reserved for much of the summer season well in advance. There are several primitive back country campsites across the canyon above Twin Lakes. The area south of Guardsman Pass is a watershed, and camping has been prohibited along the Guardsman Pass road in recent years.

Scott Hill has an incredible perspective of the Central Wasatch Range. These photos are all taken from this little peak, March 20, 2010. 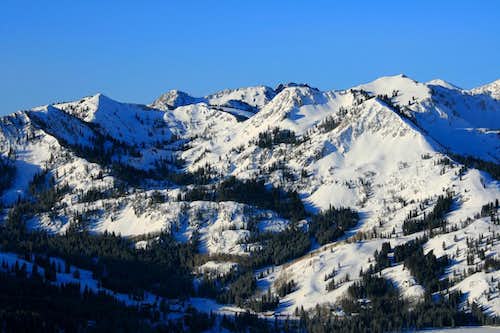 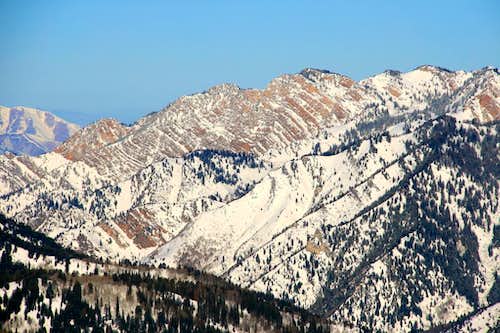 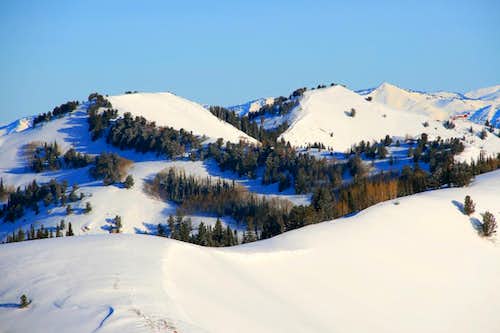 Telephoto view of Silver and Desolation Peaks to the north west. 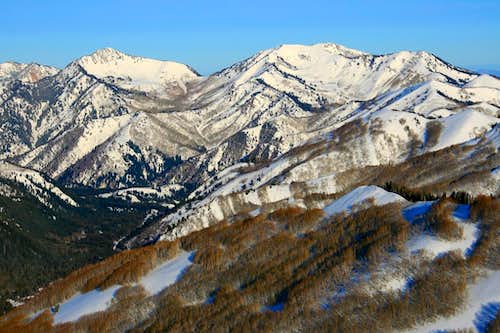 Telephoto view of Mt. Raymond and Gobblers Knob to the west. 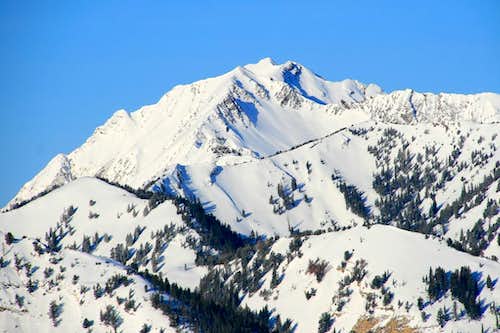 Telephoto of Mt. Superior from the summit. 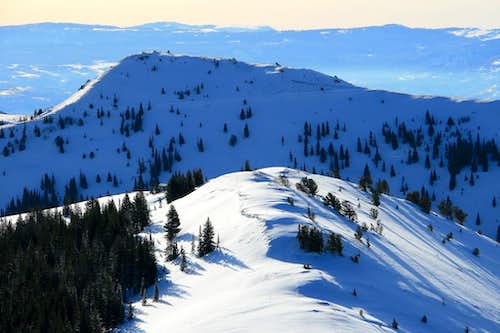 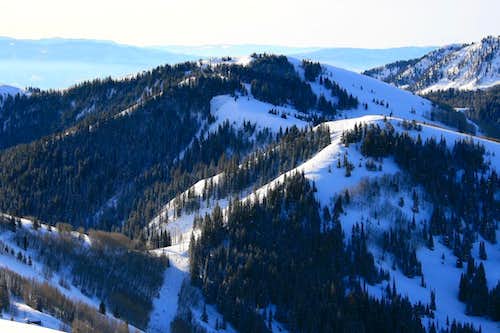 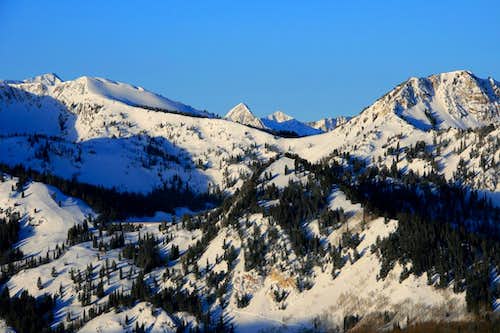 A zoomed photo of the distant Pfeifferhorn and UPWOP Peak just above Twin Lakes Pass. 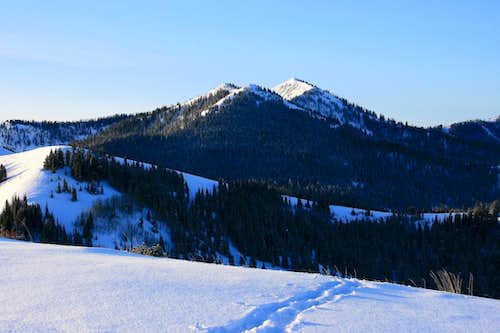 Mt. Majestic to the south from the ridge below the summit. 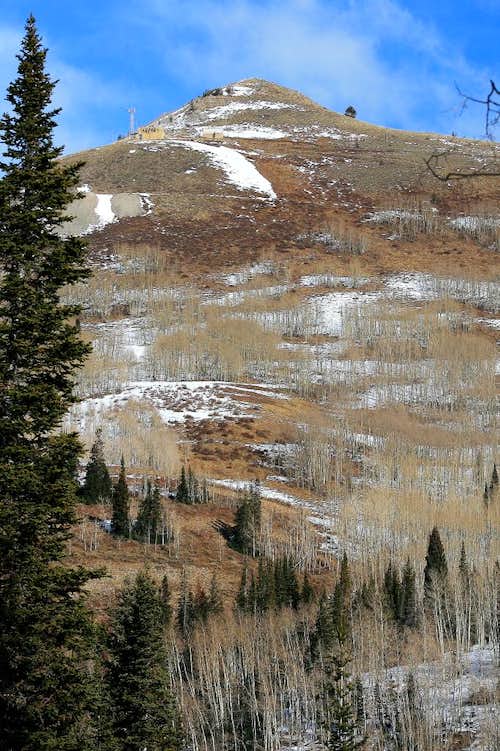 View of Scott Hill from the Guardsman Pass road. 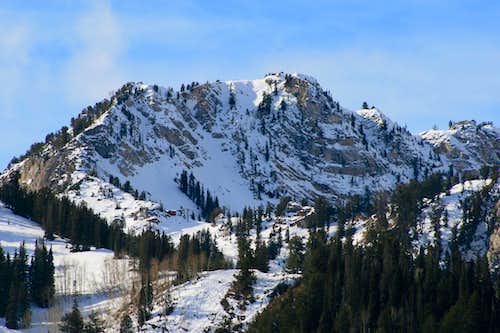 View of the Honeycomb Cliffs area across the canyon. 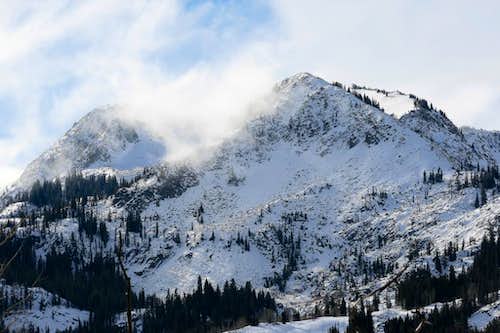 View of Tuscarora, Millicent and part of Mt. Wolverine above the Brighton area. 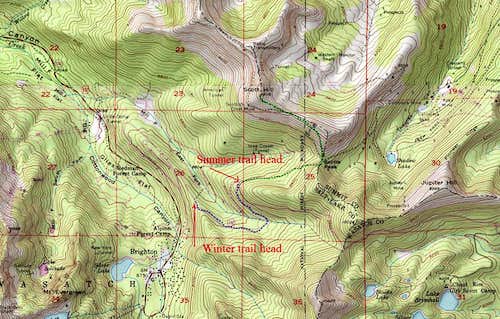 The blue shows the starting portion of the winter route, the green is the primary summer route. above the Brighton area. The blue shows the starting portion of the winter route, the green is the primary summer route. above the Brighton area.

History and naming of Scott Hill.

Scott Hill is some distance from the early Brighton community but was a popular destination for some of the recreationists there. In 1870 a group of men filed a claim on the Scott Lode, name after four of the claimants: Joseph L., John W., Ephriam, and Simmeon Scott. The mine was an immediate success and became a recognized point of reference. As early as the following year the hill on which it was located was known as Scott Hill. The four men of the Scott family disappeared from the scene within a year, but they left their name behind for others to use to this very day.

Weather for Scott Hill corresponds with that of Brighton, Utah.