Scott Surgent on the summit... 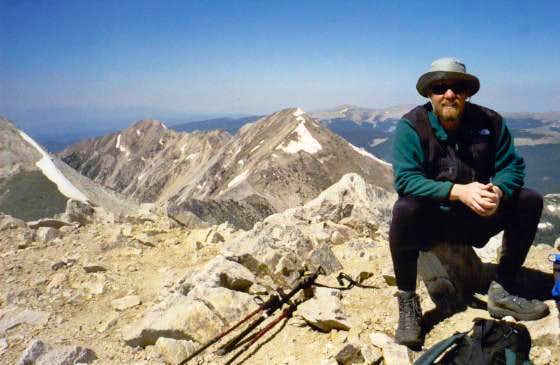 Scott Surgent on the summit of Truchas Peak. June 22, 2003. Middle Truchas (far left) and North Truchas (center) can be seen in the background. Photo courtesty of Scott Surgent.
« PREV NEXT »

The nomenclature for these mountains is a bit hazy. I have always known the two "middle" Truchas peaks to be known as Middle Truchas and West Middle Truchas, respectively. I have heard of Middle Truchas being referred to as "Medio Truchas," but "Medio" is simply Spanish for Middle.

In the classic book "The Mountains of New Mexico" (published in the 70's), the two mountains are referred to as Middle Truchas and West Middle Truchas respectively. I have always been very fond of this book and have thus adopted its nomenclature of these mountains. After all, it was this book that introduced me to these beatiful peaks.

To me, it makes more sense to call them "Middle" and "West Middle," as calling them "Medio" and "Middle" seemed a little confusing--kind of like calling "Red Mountain" (CO) "Rojo Mountain."

The confusion is compounded by the fact that the maps seem not to recognize a distinction between what I have called "Middle" and "West Middle." They just lable the whole area "Middle."

BTW, where did you see them referred to as "Middle" and "Medio"?