Scrambling out to the Ice Caves 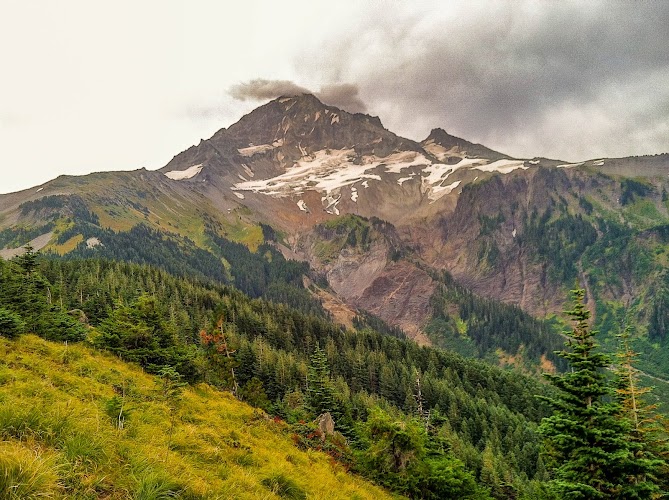 Mount Hood from Bald Mountain. The ice caves are the two dark spots near the center of the picture.
Back in September my brother and I went out for a night on Mt. Hood, going to McNeil Point and the Sandy Glacier Ice Caves. The hike up to McNeil Point was great. Finding the right route was very straightforward, thanks to the information on this website. We left somewhere We saw a handful of hikers going up, but when we got to the top there was no one else up there. We left Top Spur Trailhead about 4, but we reached McNeil Point in plenty of time to see the beautiful sunset. The night was very windy, but we slept better than expected thanks to small rock walls other campers had built. 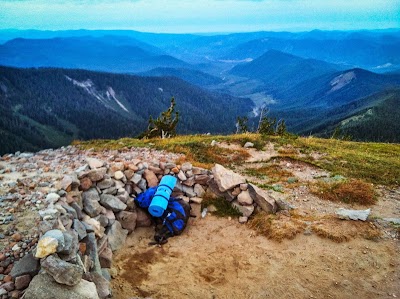 Our campsite, just above the shelter.

The next morning we ditched our packs and headed out to the Sandy Glacier ice caves. Getting out there was a little sketchy. The elevation is just a few hundred feet above McNeil Point, but it requires traversing some large scopes of scree. It's definately an area to take slow and carefully. One wrong step on the sliding gravel could send you tumbling down hundreds and hundreds of feet. But with the danger on the exposed slope came a great reward - incredible views of the valley the entire time. 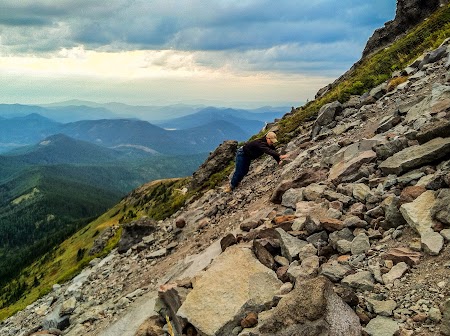 Crossing a small section of scree.
Once we approached the glacier the going got much better and more enjoyable. The glacier itself is mostly covered with rocks, in fact, it's sometimes difficult to figure out where the edge of the glacier actually is. The ice caves themselves were incredible. We had been to some in Alaska but they were a lot smaller. These were huge, and one had a small waterfall coming down right over the entrance. We did not linger long inside. There were rocks embedded in the the walls and roof, and we saw several fall as the glacier melted. The ceiling was high enough that even a small one could cause quite a wound. We didn't even enter the second cave as part of the roof was collapsed, and there was no telling when the rest of it would go. 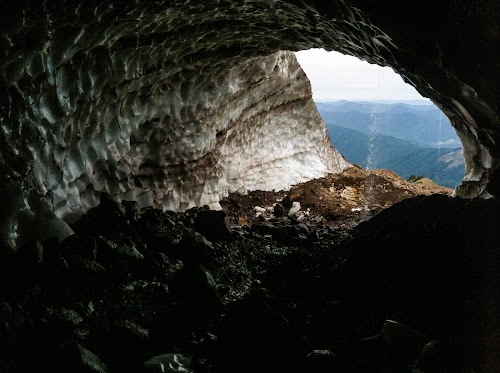 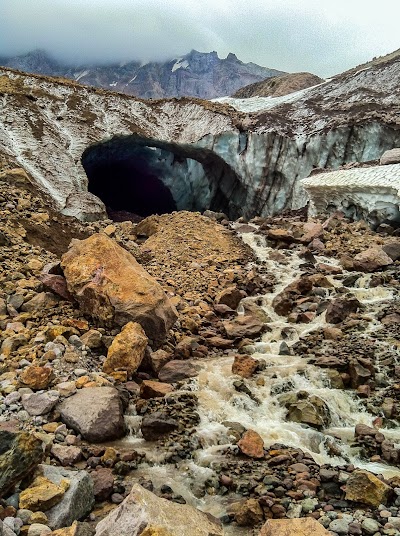 The other ice cave
Since the route we took coming out had been pretty difficult, we decided to look for an easier way to go back to McNeil Point. Heading up a snowfield (by far the easiest hiking of the morning,) we climbed up a talus bolder field. After a pretty steep climb, we reached the top of the ridge line. Here we hoped to find an easy path along the ridge. Instead, when I climbed up to the top, I realized the other side of the ridge was a sheer cliff down to Glisan Glacier. The boulders on the ridge line were far to treacherous to walk or bolder hop, so we began climbing across the boulders just down below the ridge. We were also pretty much committed to this route, as we had a rendezvous down on Timberline Trail at 12:00, and we didn't have time to climb back down and return across the scree as we had come. 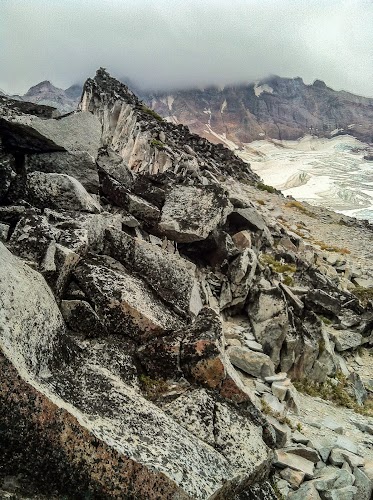 The ridge we climbed down.
What followed was probably the most dangerous scrambling I've ever had the opportunity to do. We were going across really difficult terrain, with tremendous exposure, and we needed to move as fast as we safely could. As we got further down the grade wasn't as steep, but the rock became quite bad quality. Sometimes while holding on to the cliff wall, a section would just break off in your hand. The worst moment was when I was crossing a small section of scree while holding on to a motorcycle-sized bolder. The bolder began to slide down the hill, pushing me below it. Thankfully I was able to quickly move over and avoid it, but it was a little scary moment. Even a twisted ankle could be serious in a place like this, as we were far from the nearest trail. 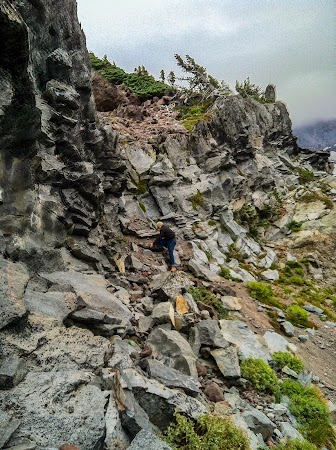 We finally made it back to the trail and hurried down, arriving only 45 minutes late. All in all, it was one of the best hiking experiences I have ever had. 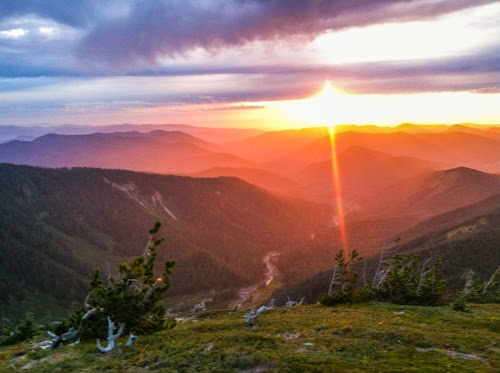 View Scrambling out to the Ice Caves Image Gallery - 1 Images

Wish I were there. Sound like a great scramble with wonderful views. The caves sound supremely interesting.

Definitely want to check these out next summer, and don't even need to summit to do it. Below is a link to an article about these caves: