The Seaman Range is a small, rugged, and wooded mountain range sitting at the centerpiece of the Weepah Springs Wilderness (designated 2004) between Hiko and Lund in southeastern Nevada. The range sits next to NV 318, making for relatively easy access compared to some other Nevada peaks, though those with passenger sedans would still have to do some road walking to get close to the range. The range highpoint, labelled as Timber Mountain on some maps, sits at the southwestern end of the range. It is not to be confused with a more commonly named Timber Mountain to the northeast and a worthy peak in its own right. (It’s also possible that the confusion stems from the entire southern half of the range being generically referred to as “Timber Mountain” in general.) The impressive looking “Black Cliff” anchors the range on its northern end. For prominence chasers, the peak, being the highpoint of a relatively isolated range, has a topographic prominence of over 3,300'. And for those interested in more than just checking a peak off a list this Wilderness Area boasts its namesake springs as well as petroglyphs and arches, including a named “Skull Arch”. More information on the Wilderness area can be found here.

Note that I didn't originally intend to make a page for this peak, so I didn't really take notes on mileage and detailed directions back when I was here.  However upon reviewing some pictures I figured the area was pretty cool and deserved some exposure on SP.  If you have any more information in word or pictorial form please shoot it over and I'll add to the page.

The best way to approach the highpoint is from the south.  The unsigned turnoff for the access road along NV-318 is a little over 19 miles north of Hiko and 74 miles south of Lund; it sits a few miles south to the south of the White River Narrows section of the highway.  There is another dirt road directly south of the Narrows, but that is not the HP access route.  If coming from the north the right dirt road is the second major gravel roud on your right after leaving the narrows.  On your maps, look for the road branching NNW from the highway, ending in a small diamond/lollipop shape south of the highpoint. 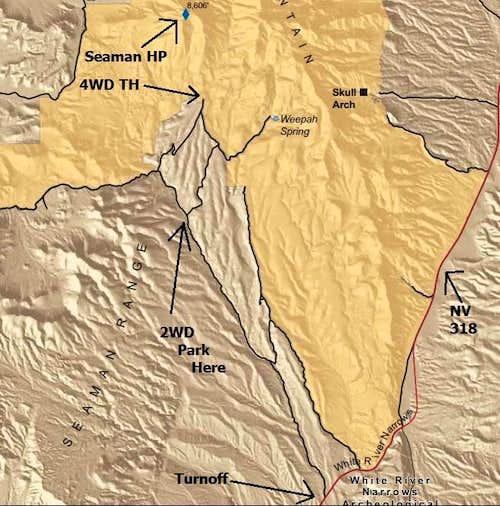 BLM Map with labels to TH

Take this turnoff as it ascends through a few drainages.  A few miles in you will cross a gate.  Keep going until you reach the southern tip of the diamond.  The road thus far is very graded gravel and accessible to most vehicles.  Once it splits at the diamond the road gets rougher, so if you don’t have high clearance park here.  You will have to walk a few extra miles of walking to do.

Continuing on you can take either fork as they rejoin each other as you get to the base of the peak.  The right fork will ascend to a T intersection where BLM signs point towards Weepah Springs towards the right.  Go left.  I found the right fork to be rockier.  The left fork was less rocky but had some severely rutted sections as of April of 2013.  Both sides are passable for 4WD vehicles with high clearance.  Per Ken Jones the right fork is a little shorter mileage wise.  At the northern tip of the diamond the two forks rejoin each other, and there is ample parking.  You can park here (maybe 10-12 miles from the highway) or you can proceed north less than a mile down a pretty rough and rocky road to the signed BLM/Wilderness Area trailhead. 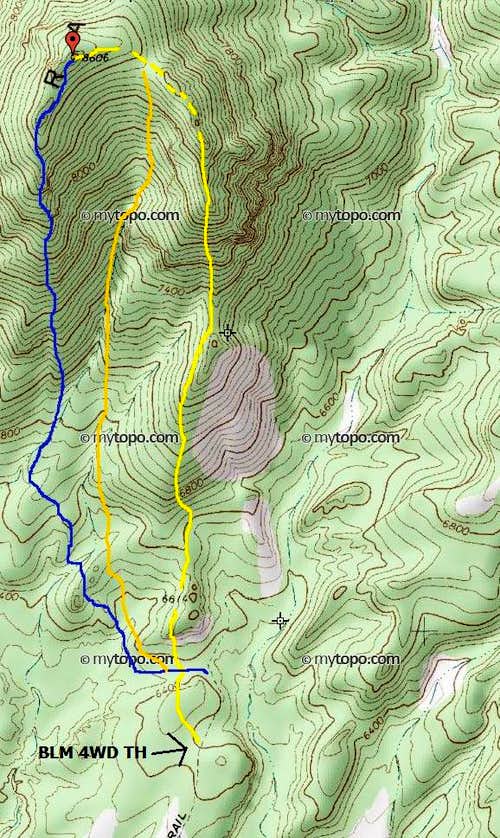 Three approximate routes to the summit.  Orange is standard.  Blue is the Direct South Ridge alternative.  Yellow is quite circuitous

There are a few ways you can reach the highpoint from the BLM TH.  First though, note that the trailhead is located on the side of a hill, with a small but pretty spectacular canyon to your right.  There is a dirt road off limits to vehicles that you can walk, and it will lead you northeast then back northwest into a small valley north of the hill on which you are parked.  One would be tempted too to head straight into the brush up the hill from the parking area directly towards peak.  You can do this, as long as you are fine with a descent of maybe 100 feet or so down into the same valley.  From here the mountain looms above you, though a few small buttes and drainages stand between you and it.  There are generally three ways up the mountain, and you can clearly see all three routes from here.  All the alternatives are probably around 4-5 miles roundtrip, with net gain of 2,200 or so feet and some minor ups and downs along the way.

The main ridge itself forms an upsidedown U, and you’re facing the open side of the U from the south.  Based on most accounts, the standard route is to traverse towards that open drainage between the two ridges forming that U, crossing some smaller drainages on the way.  As you get higher up the drainage you will have to pick your way through some talus, boulderfields, and loose rock.  When you finally reach the ridge crest near the top of the U, at perhaps 8,360 ft or so, you will find a charming ponderosa pine forest, one of the largest groves in Nevada supposedly.  The true summit is along the left side of this upside down U you’re facing (the western ridge), so upon reaching the ridge crest you want to traverse left (west), staying along the ridge crest, through the ponderosa until you hit a rocky section.  Scramble up the rocks to reach a fairly open summit interspersed with brush.  This route is marked orange in the linked map.

You can also ascend the more western ridge, or the Direct South Ridge (because it comes south directly from the true summit); this is the route we actually descended.  Just aim towards the ridge, passing through small sandy drainages, and make your way up.  Along the way you might see some pretty cool serrated and hoodoo like cliffs.  You can scramble through them for some class 3-4 excitement, or go around them.  The ridge will start getting rocky around 8,500’ or so, as you top out at a false summit with broad views to the south.  Continue north towards the true summit, scrambling along the rocky outcrops on the ridge crest or avoiding them by sidehilling to your right.  When in doubt stay slightly on the right (east) side of the ridge crest, until you come upon the rocky summit block, where a few hops will take you to the top.

The more circuitous route would be the route marked yellow on the map.  This is the route we took on our way up, up the ridge east and parallel to the summit ridge which I’ll call the Southeast Ridge.  This route will give you even more scrambling to choose from and amidst that, a fairly scenic ridge walk, giving you the entire, ahem, Seaman experience, for better or for worse.  From the small valley north of the parking spot aim to the left of some rocky knobs along a butte like hill that is actually a lower extension of the ridge.  Aim for the obvious ridge that lines the right (east) side of the U drainage, or rather, a southeast offshoot of it.  It is a very pleasant ascent through pleasant terrain until the ridge tops out at around 7,400’.  You can sidehill to the left or stay along the ridge crest.

From a small saddle connecting that knob to the main ridge the going gets steeper, looser, and once you near the top of the ridge around 8,300’, requires some scrambling.  You will top out along your first outcrop of the day, and see the rounded traverse you will have to take to get to the other side of the U and the highpoint.  You will have pretty good views of the valley and the white chalk like cliffs to the east and southeast. Scramble up, through, or around the rocky outcrops lining the ridge crest until you enter the ponderosa forest and reach the saddle where the standard route comes up from the main drainage.

Views on most days would be pretty expansive, with Mt. Wilson and Highland to the east, the Egan and Schell Creek Ranges to the north, Troy and Quinn Canyon Peaks to the northwest, and to the general south the Worthington Range, Mt. Irish, Badger, and the Pahroc Ranges.  Unfortunately our views were limited by a pretty dense dust cloud when we were there in April.  Feel free to add pictures to this page if you climb this peak under more ideal viewing conditions.

This peak is close to the highway but still remote. Make sure you gas in Alamo if coming from the south or Ely if coming from the north; Lund has a gas station but there’s no guarantee it will always be open. Cell phone coverage here will likely be sparse to none. Be acquainted with cross country travel in trail-less terrain.

Snow would make an ascent tricky and annoying but not impossible. Most of the route is south facing so both the Standard and the Direct South Ridge would probably melt out early. This area might get a few storms during the winter but should melt by early spring, and the access roads should melt at the very least after several straight days of warmer weather. I'd imagine the shaded summit area would retain snow a little longer than the rest of the southern aspects of the mountain

Open BLM country.  Plenty of camping everywhere, including the trailhead and turnoffs along the way.

An offsite TR with GPS and waypoints