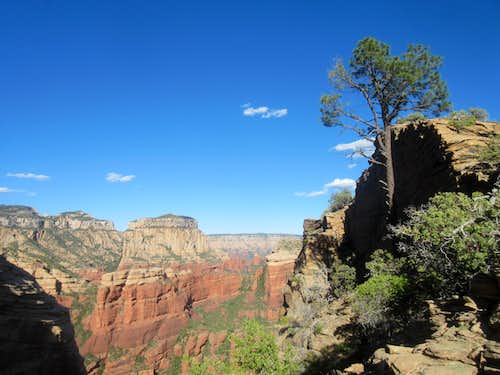 Looking east from the southeast ridge of UN 6519
Only seven years after the last list, I present to you…

More difficult by far than the highest ten summits, only ONE of these has a trail to the summit... and that "trail" requires at least 3rd class work en route. The summits themselves are varied... from brushy UN 6474 tucked far back above Sycamore canyon, to impressive 6523 - impossible to miss from anywhere west of Sedona. From the popular dome of Capitol Butte towering over the town of Sedona itself, to the fearsome 6519, standing sentinel over the upper reaches of Boynton canyon. Some have plenty of hikers on their slopes; some may have only been ascended a few times.  Or less.  I know, I've said it before, but let me say it again: although they present adventures, I would hesitate to recommend most of these summits to other hikers and climbers.  The dangers are very high, and the potential for serious injury or death is great. So put down the rope and rack, head up the road to Flagstaff, and have a nice hike to Humphreys, Kendrick, Elden, or the Beaver Street Brewery. Do not climb in Sedona. There. I’ve said my piece. Here, then, are the summits:

UN 6523 is a high mesa half a mile long. Perched atop seven hundred-foot cliffs, it somewhat resembles an immense battleship, cutting south from Secret Mountain (Hmmm, or maybe a giant whale swimming south from Secret Mountain.  Didn't realize that until I posted the picture below). The butte divides Loy and Hart Well canyons and lies closer to the latter, which is privately owned. As on many Sedona buttes, you may find Sinagua ruins here if you take the right route. 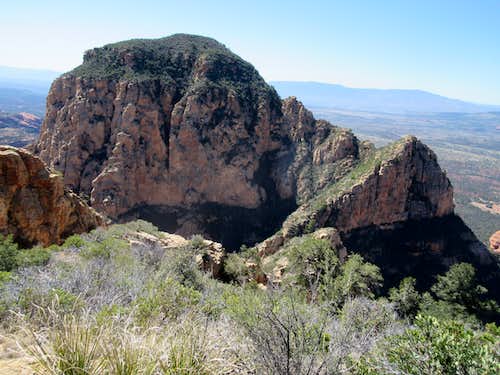 UN 6523 as seen from the Toroweap Tower

The intimidating UN 6519 rises above upper Boynton canyon but is so high it can be seen from the canyon's mouth. I've heard this butte called the “White Bishop” for its resemblance to the chess piece; the first ascent team called it “The Pagoda.” Whatever the name, the mountain is difficult, loose, and dangerous. 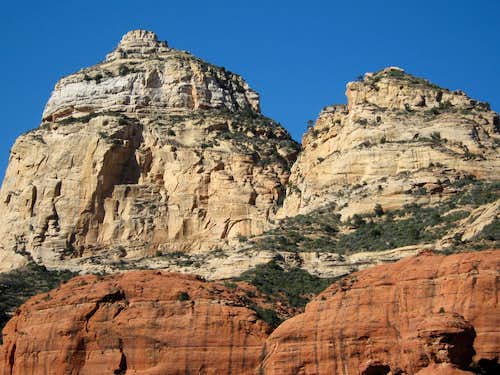 UN 6510 towers more than 1700 feet above Long Canyon in layers of steep, colorful cliffs. The actual climb is a bushwhacking nightmare and may take longer than any other Sedona summit to complete. Interestingly, it can be seen in Jim Jarmusch's 1995 film “Dead Man.” 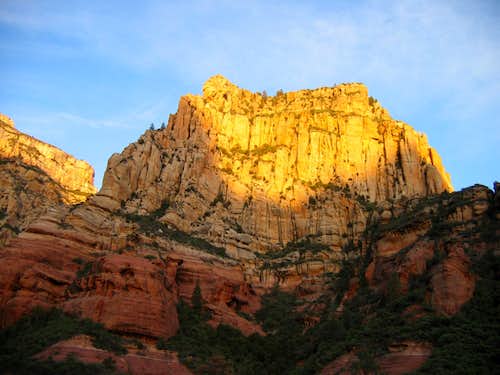 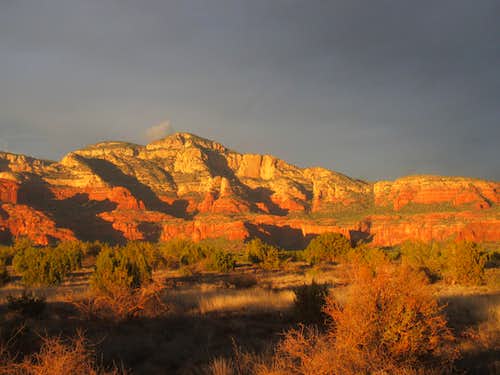 UN 6474 is the farthest west of the Sedona summits and is somewhat different in character than the others. There's not as much redrock here, and the slopes are more gradual and brushier – though it's a long hike regardless. I saw plentiful bear sign along the way, although no bears were in evidence. 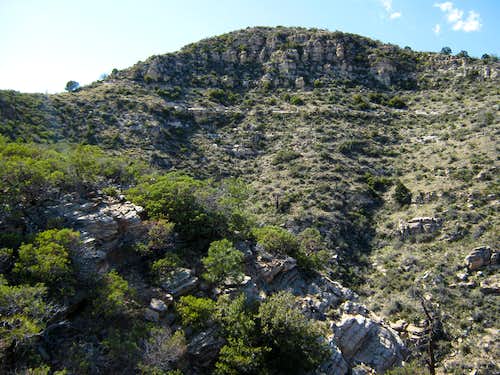 UN 6446 “Bad Rock Butte” stands just above Slide Rock Park and its summit is no more than a mile from the road. But the butte is a maze of dead end routes and short climbing sections. Furthermore, the recent fire loosened not only the slopes around the butte but cooked the vegetation holding many of the cliffs together... beware! 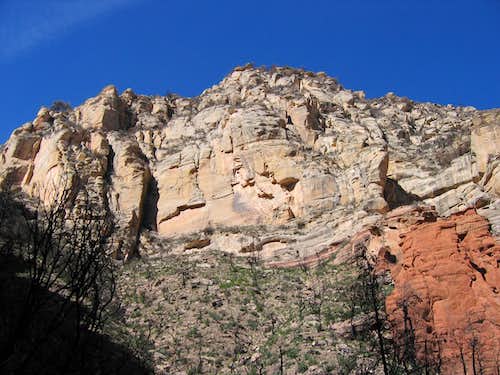 The picturesque UN 6390 “Toroweap Tower” is a steep, narrow butte near the end of Hart Well canyon. A skyscraper-like shape and distinctive summit cap complete the picture, and big walls separate 6390 from Loy, Hart Well, and nearby Secret Mountain.The Toroweap layer of the cap is slightly better rock than the crumbly Coconino sandstone beneath, though not by much. 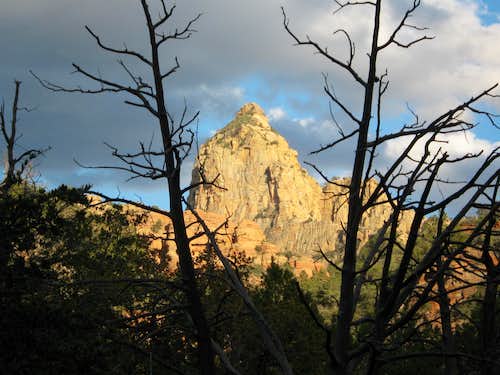 Capitol Butte (6355') is undoubtedly the most frequently climbed of these summits. There was no trail fifteen years ago, but now two separate routes run to Capitol's summit. Once known as Thunder Mountain, the butte is perhaps the most obvious Sedona landmark, as it looms directly north of the town itself. 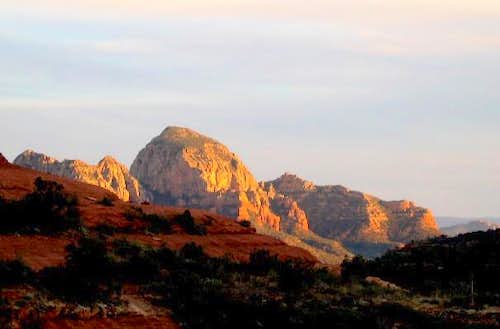 Capitol Butte from the northwest

UN 6260 is located far back in Bear Sign canyon. Though not overly technical or as hazardous as many other Sedona summits, it is fairly remote. In 1998 Forest Service ranger David Miller disappeared back here somewhere and his body was never found; a trail bearing his name now connects Bear Sign and Secret canyons. 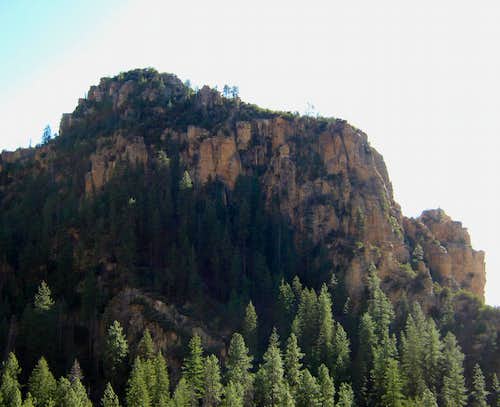 UN 6220 “The Wedge” juts from redrock platforms about halfway up Boynton Canyon. Though from many angles it appears to be part of Bear Mountain, a steep, 400-foot gap separates the Wedge from its larger neighbor. Sheer cliffs and tricky route finding make this a difficult summit to attain. 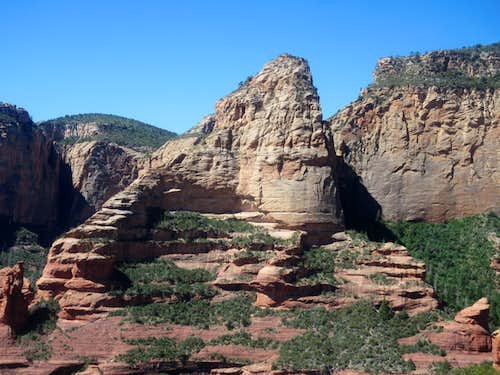 I used the popular three-hundred-foot rule to define Sedona’s summits. This rule basically means that a summit has to be at least 300 feet above any saddle connecting it with a higher neighbor to be considered a separate mountain. Although I dislike such rules – who’s to say a certain point is a peak but one a foot lower is not? – there must be some definition, or else every separate rise on a given mountain is a separate peak. Or none of them are.

The problem with this, obviously, is that the arbitrary number determines what is a summit. If the rule was changed to 400 feet, suddenly Sedona and numerous other places would “have” many less peaks and summits. If it was changed to 200 feet, they would have more. So these lists are a starting point… and little more. 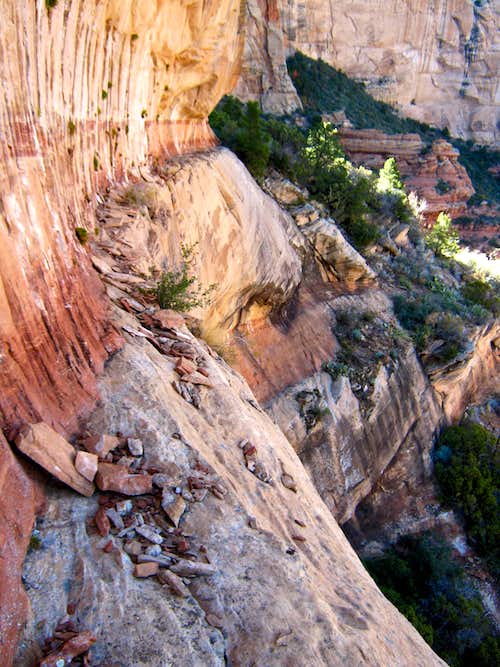