As this is one of those rare summits, where we despite not such a hard access have not reached the highest point, I am just drafting this page, and am more than happy to give it to anyone who would have more first hand experience with Seekarspitze. On the other hand, it's a nice and popular mountain, so why not giving it a start page. 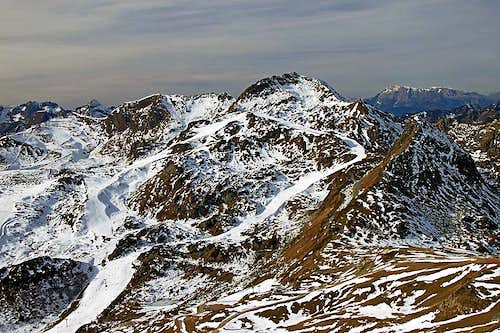 On the east ridge
Seekarspitze is the central figure of the Obertauern Pass plateau. The slopes of this quite appealing summit are due to the ski circus completely degraded. But still, the summit remains a valuable and attractive goal, be it in summer be it in winter. Despite rather steep slopes, it is possible also to ski down by the south-east side. And people do so massively, in lower areas they of course use arranged ski slopes. For example, already on November 18th (2012) more than 30 people were ascending up the ski terrains on tour skis, some of them were negotiating also the summit itself, despite hard snow and some ice on the summit ridge.

Steinkarspitze is a summit in the main ridge of Schladming Tauern, which is running there in the west-east direction. As from the summit another short, rocky south ridge descends, the mountain really looks like a sharp peak (Spitze). From the fore-summit in the east ridge towards the north another long ridge deters, culminating first on on Steinkarlspitze, then continuing further towards the valley of Enns.

As we can see on the embedded photos, all southern slopes of Steinkarspitze are arranged into regular ski terrains. Cable cars bring skiers as high as on 2200 meters of altitude. In summer it is also possible to do a round tour by marked paths, crossing the summit. As said, a ski (or snowboard) descent is somehow more difficult, but due to nearness of cable cars very popular. The ascent over the upper part of the summit ridge is a bit exposed. 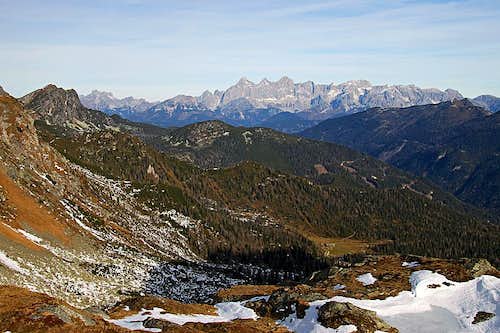 The view on Dachstein
I can of course not judge the summit views, but already from the east ridge which we reached, we have a very nice view on the mountaneous neighbourhood. The strongest impact makes the view on the rocky south walls of Dachstein. They are not just close to us, but still enough to make a strong impression. The rest of Niedere Tauern make an impression as a broad sea of rugged, not very wild summits. In the distance we also see many of the highest, glaciated summits of Hohe Tauern.

Even if it is also possible to reach the summit of Steinkarspitze from the trailheads on the north, by far most popular trailheads are on the Obertauern plateau. The Pass, 1738 m, lies south of Seekarspitze, and is crossed by the main road, connecting Lungau and the valley of Enns. From the Obertauern Pass we can even drive a bit further. Until all parking places are not occupied, we can drive from the pass to Seekarhaus, 1797 m. Otherwise in winter ski bus is continuously driving till there (free of charge). From the main road you have some 2 km to Seekarhaus. The trailhead can of course be even much higher, even on 2200 m, provided that you buy a ski ticket.

Starting the tour by Seekarhaus

This is the most popular ascent route on Seekarspitze. From Seekarhaus we go towards the north-west to a small chapel, and then right along the ski slope (looking upward). We aim a distinct saddle on the east ridge. The summer path crosses the ski track soon, ascends a bit more steep slope and higher reaches the ski track again. In winter it is much better if we simply ascend along the edge of the ski piste (using tour skis). A bit below the highest point of ski tracks the marked path brings us on the edge of a small basin below the south-eastern summit slope of Seekarspitze. The path turns up towards the east ridge, but before reaching it, continues some more time across the slope. Then it climbs the summit ridge and goes by it on top. The last part is a bit exposed and may in winter conditions require appropriate equipment (ice pick and crampons). We were on the east ridge on November 17th, and in light summer shoes and without crampons and ice pick we did not dare to ascend over the icy slope and the ridge. From the hut the ascent requires good 1 h 30 min.

From Seekarhaus another marked path goes also towards the west, to Gruenwaldsee. This lake can be reached by marked paths also directly from the Obertauern Pass, going northwards. From the lake the marked path continues further towards the north on Seekarschneid (ridge), 2288 m, and there turns towards the east. We climb Seekarspitze over the summit rocks by a marked, partially protected path. This route, combined with #1, can make a nice round tour which would require only half of a day.

Seekarspitze can be climbed any time of a year. During ski season usually the slopes are arranged and all ski lifts are operating, bringing us just below the summit (150 more meters of ascent only). But still, the winter ascent can be quite demanding, requiring a proper equpment (ice pick, crampons).