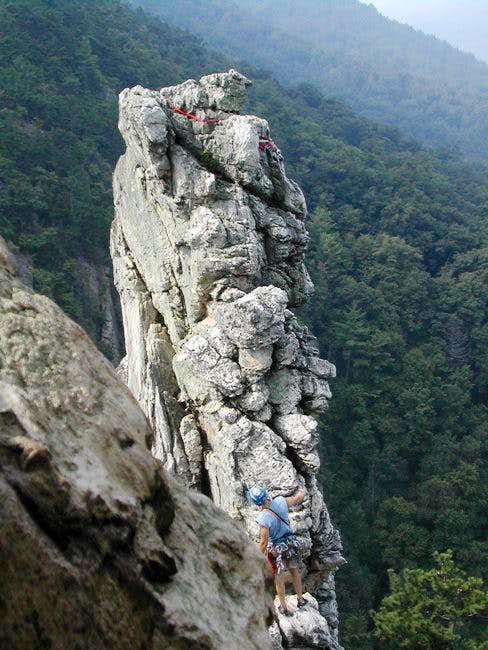 Seneca Rocks is a fin of vertically layered Tuscarora quartzite that rises above the headwaters of the Potomac in Pendleton County, West Virginia. It is a popular eastern trad climbing area handy to Washington D.C. and Pittsburg. The rock is the same type as is found in the Shawangunks, but unlike the horizontally layered Gunks, the climbs often follow steep cracks.

One approaches Seneca via U.S. route 33 from Elkins or Petersburg.
The easiest route up the North Peak is walking out from the hillside from the northeast side. The South Peak is most easily gained from the West Side via the Old-Mans or the Old Ladies which are 5.1-5.2. Exit from the south peak is via three 75 foot rappels. The rock with its pines has the air of a classical chinese landscape. This is particularly true if there is mist. Senecal was a training ground for U.S. Mountain Forces during WWII as the face of a thousand pitons attests to. By 1948, Herb and Jan Conn had done east face and west face routes that bear their names. They went on to do Concourse on Cannon in Franconia Notch where Jan lead the 5.8 crux levitating in her tennis shoes.

From Pittsburgh go south to Elkins W.V and follow U.S. 33 to the hamlet of Seneca Rocks a distance of 177 miles from Triangle Park in Pittsburg with time estimated at 3hr 15min in my atlas. The Gendarme climbing shop has directions from there. The places of business include Yokums and Buck Harper's Store from whose veranda you can view sunset on the rocks by looking due east. From Washington D.C. (Capitol Hill) follow U.S. 66 west to Strassburg and then turn south to Harrisonburg via U.S. 8. Thence west to Seneca via U.S. 33 a distance of 196 miles. My atlas estimated 3hr 30 min for this trip.  By now you have made it to Buck Harper's Store and you can see the fin rising before you to the east. Roy Gap road-unimproved for hikers and Roy's pickup truck only. The last time I saw this pick up it had a boulder straped over the differential to help it ford the Potamac.

There are no fees associated with climbing at Seneca.
"The Gendarme climbing shop shares its name with a former geological feature at Seneca Rocks - one which is no longer standing. The Gendarme tipped over at 3:27 pm on 22 October 1987. Luckily, no one was near it or climbing it when it fell. The Gendarme was a leaning, 8 meter tall, 20 ton slab of ancient Tuscarora sandstone poised in the center of Gunsight Notch being the gunsight "

You can climb any time but there can be a fair amount of snow in the winter. The ratings of the climbs used to lean toward the sandbag- but the routes have recieved fairer ratings of late. For example "Welcome to Seneca" is a John Stannard 5.11 of about the same vintages as Foops in the Gunks. It used to be called a 5.10 but no longer.

Yes. There is Yokum's at the foot of the rocks and an USFS site west up U.S. 33. There are plenty of commercial and forest service camp sites in the area.

Via Ferrata at nearby Nelson Rocks

Via Ferrata at nearby Nelson Rocks

Thanks for the heads up. Our readers will most surely benefit from this convenience.

There is a USFS camp site called Seneca Shadows about 1 mile east of the town of Seneca Rocks on route 33. It has sites for walk-in camping, car camping, and electrical hookups, plus great hot showers. It's convenient and cheap. Here's a link
http://www.fs.fed.us/r9/mnf/rec/rog_campgrounds/senecashadows_campground.htm

Thanks for the heads up. Our readers will most surely benefit from this convenience.

The warning you have on this page does not impact BLM lands or US Forest Service lands. It never did, because that is impossible to enforce. I hike and climb on BLM lands and USFS lands all the time, for free.

Re: America the Beautiful Pass

Actually, the pass covers all federal fee areas when it comes to entrance fees. It's not just for national parks; for example, I have used it for entrance to national wildlife refuges, which are not part of the park system but instead are administered by the Fish and Wildlife Service. There are some Forest Service and BLM trailheads where there are fees, and the pass covers such places. However, it is correct that there are no fees, and never were to the best of my knowledge, at Seneca Rocks, so the page is in error suggesting that there are or soon will be.

Re: America the Beautiful Pass

Thanks, Apparently there are no fees here. I certainly never paid any in earlier times.

There are no fees associated with climbing at Seneca. The America the beautiful pass is only for National Parks.

Actually, the pass covers all federal fee areas when it comes to entrance fees. It's not just for national parks; for example, I have used it for entrance to national wildlife refuges, which are not part of the park system but instead are administered by the Fish and Wildlife Service. However, it is correct that there are no fees, and never were to the best of my knowledge, at Seneca Rocks, so the page is in error suggesting that there are or soon will be.

I believe there was discussion of this in 2004. I never paid any fees in the 70's and 80's and you've been to Seneca in recent years and were not charged so clearly there are no fees.