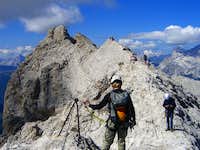 Sentiero ferrato Ivano Dibona is a route that goes along the Zurlon-ridge of Monte Cristallo in the Dolomites, Italy. It is a historical route which was used it World War I. You can see along this very interesting route many old ladders, old huts and military positions. The upper part of the route is mainly fixed with ropes and can be called a via ferrata. The start of the route is a suspension-bridge which was used in the movie "Cliffhanger".

The route starts at Forcella Staunies (Rifugio Lorenzi) and leads to Cristallino d´Ampezzo (you can reach this summit in a few minutes), to Forcella Padeon, Vecio del Forame, Forcella Alta and finishes at Col dei Stombei. From here you descend to Val Padeon where you can choose to descend to Ospitale or ascent to Passo Som Forca and continuing to Passo Tre Croci. Some people ascend along the route, which is a great ascent with more than 1500m and 8 hours. 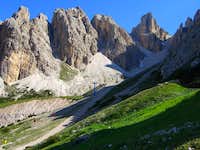 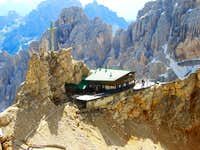 Main direction to Cortina d´Ampezzo:
From Brixen/Bressanone on #49 to Brauneck/Brunico and continuing to Toblach/Dobbiaco. Short before Toblach you have to turn right on #51 to Cortina d´Ampezzo. You will arrive at Cortina on this street or you can reach Passo Tre Croci via Misurina. 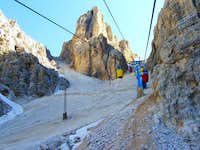 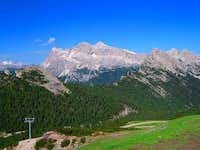 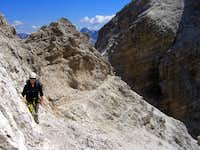 From Forcella Staunies you have to follow a metal-ladder of the cable-car station to Sentiero Ivana Dibona. At the beginning of the route lurks the Ponte Cristallo to the climbers. It is the highlight of the route. The 27-meter long bridge was used in the movie "Cliffhanger". After it you climb some ladders and reach the top of the Zurlon-ridge. this is the highest point of the route (2.985m).

From the ridge you can also climb Cristallino d´Ampezzo in a few minutes. While continuing Sentiero ferrato Ivano Dibona to the Forcella Grande, please look to the painted signs. The route changed the last years a few times! Maybe you climb in a one-way-street without safe exit and you have to turn back!

If you are concentrated and have followed the signs, you will reach the south flank of Cresta Bianca, where the original route starts. After a while you reach Forcella Padeon with the old hut (military position: "Buffa di Perrero"), which is used as a bivouac today. After Forcella Padeon the route leads around Col Pistone to the south flank of Vecio del Forame the west part of the Cristallo-massif.

After it you have to descend the half of a couloir at Forcella Alta. This descent is very awkward. Now the route leads to Forcella Bassa and some military positions in the western part. It is very interesting to watch them. After them you reach Forcella Zurlon and have to descend on a wide track to Val Padeon south of Col dei Strombi.

You need full equipment for via ferratas! The routes goes in heights of 3000 meters. Be prepared for weather-changing, rockfall and problems of orientation.