I ran into John bouldering under a highway bridge with glued-on holds. Our friendship had been strained for about a year because of a misunderstanding. It made me uncomfortable but I had to bring up the issue. Some harsh words had been uttered by both sides but without malice. We talked and shook hands, and I suggested we do a wall together in celebration. I knew which wall and which route; I had it all figured out.“ How about Chuoinard Herbert on Sentinel?” John said “Sure, sounds good” in a heart beat.

I had tried this route twenty years earlier with a guy I met at camp 4. We had made it half way up the wall when my newly found buddy dropped his jumars and aiders despite my constant nagging that they should have been attached to him at least during cleaning a pitch. Shortly after that it rained on us and we retreated to the top of Chessman Pinnacle where we spent the night. Going back down the 4th class approach ramp with a huge haul bag was probably worse than going to the top. But this time I had a partner I had climbed with before. Things would be different, and they were.

I was driving fast up the winding road to the Valley. I told John that if I got a few hours of sleep I would be on top of my game tomorrow.
I woke up John before dawn. He sprang out of his bag saying, “You must have gotten some sleep.” “Yep” was my answer.
The approach went pretty smoothly and we were on the base in three hours. With 1500 feet of vertical granite looming above I was off on the first pitch. 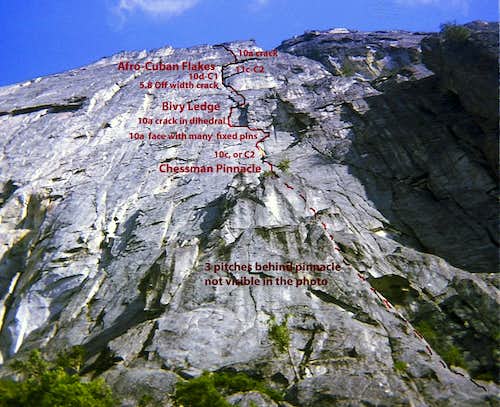 Chouinard-Herbert Route seen from the base of Chessman Pinnacle

Here’s our climb formatted like a guide with some personal notes:

P 1: Climb an easy face with a fixed pin to a good ledge.

P 2 & 3: Low angle chimney pitches that get progressively steeper culminating in a 5.7 section.
Note: The second should help with the haul bag because of the drag.

P4: John’s. Work left on a ledge to a short 5.8 hand crack to reach the top of Chessman Pinnacle about 350 feet from the base.

P 5: Next two mine. Climb a few feet up and right to a left leaning crack. Climb this at 10c or C2 to a belay stance.
Note: Pitch 5 is the hardest aid section of the route. I used a lot of Aliens.
I usually carry at least 2 sets of these little devils, but on Sentinel I carried
three sets.

P 6: Climb a 5.9 slab on your right to an 11a-C1 crack and a belay stance.
Note: The haul bag will take a nice swing here. The second can control the swing and even help get it passed any difficulties during cleaning.

P 7: John’s. You will see a prominent arch above you. Climb the face under the arch with many fixed pins. 10a and fun.
Note 1: If the second is jugging the pitch, he/she will get practice cleaning a traversing pitch that comes in handy following the Afro-Cuban Flakes much higher up.
Note 2: John led this pitch laughing and saying, “This is like a sport climb on a wall.” And I was thinking to myself, “John has turned into an accomplished climber in the past two years.”

P 8: My pitch. Climb a left facing open book with a 1-2 inch lay back crack, about 10a-C1, that soon becomes much easier at 5.8-5.9 to a great ledge.
Note: Watch out for a few loose rocks and how you fix the rope for the second.
The ledge, roughly half way up the wall, is narrow and sloping, but a welcomed sight for a tired climber. You can bivy here if you are running out of day time hours. We spent the night here. John snored all night and I counted the stars. 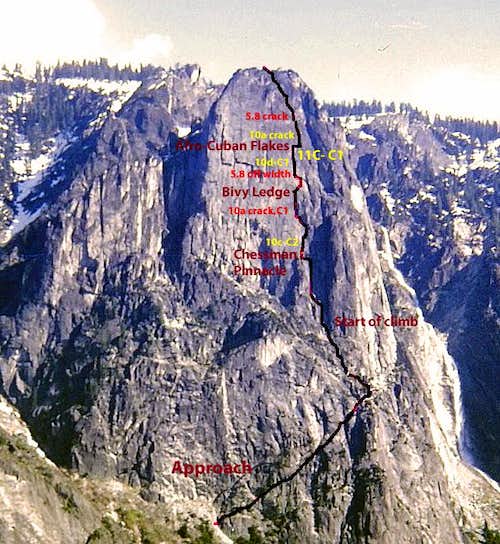 P 9: Next two pitches, John’s. 4th class and obvious. Climb up and right, then up and left to a belay ledge.

P10: Head for a small pillar with a 5.7 crack on its right edge with the main wall.
Note: Try to set up your belay atop the Pillar if possible. We made the mistake of belaying from the dihedral that created two problems.
First, the belayer, in this case John, had to do a hanging belay for a long and complex pitch. Second, if the leader falls on the off-width crack above, he will hit the belayer directly below him.
Before starting up this pitch, I told John "if I fall on this pitch, don't be a hero and try to catch me. Just get out of the way and let me fall straight down." John said " you bet, I'll let you fall."

P 11: Next two mine. Climb a right-facing corner with an off-width crack start, about 5.8. It can be jammed if you have long arms to reach inside, or lay backed like I did. Not well protected, but crack gets narrow near the top and will accept a #2 Camalot. Continue this pitch through an 11a-C1 overhang and a 10d-C1 shallow and still right-facing, crack to another hanging belay. Bringing belay seats would have been a good idea. Poor John showed a lot of patience belaying me in his harness.

P 12: You will see a large impossible-looking overhang above you. It’s called Afro-Cuban Flakes. Climb up a bit and traverse right under the overhang to an obvious exit 11c-C1,or C2. Note, I am not a good judge of true difficulty ratings. Above the overhang you will have a beautiful 10a crack that leads to a good ledge 75 feet above Afro-Cuban Flakes.
Note: If your second is jugging and cleaning the pitch he/she will need to be adept in following a traversing pitch. He/she can also aid the pitch and back-clean the pieces. The second will also help get the haul bag passed the overhang.

P 16: mine: climb an easy face with may be a 5.6 move to 4th class climbing and the top of Sentinel.

Our gratitude went to the person who had stashed a quart of water on top. We figured it was done by a climber who understood what it means to have some water on top. As we drank the water I felt proud I had confronted a difficult situation with John and preserved a friendship for life. Climbing Sentinel was a bonus.

There is an excellent and detailed description of the approach done by “old5ten” on his Mountain & Rock page.
old5ten

There is a detailed description of the descent done by “old5ten” on his Mountain and Rock page on Sentinel. However, this is my description
and a personal word of caution:
Do not try the descent in the dark. It’s dangerous enough done in the day time.
My experience with the descent, although extremely dangerous, did not involve much confusion and route finding. Being short, I was able to go through the sandy and steep brush tunnels, made by climbers, and quickly find the descent gully. The gully is steep and may involve 5th class down climbing. I could have been killed by a 300 pound rock that slid two inches just above me. If that rock had not stopped, I would not be here today. When we reached the slabs we crossed the drainage to the east side and did some 4th and easy 5th class down climbing to the trail. We had done the approach and the descent in our most comfortable climbing shoes, so the scrambling parts were not nearly as hard as doing them in tennis shoes. Do not hestitate to break out the rope and rappell any section you don’t feel comfortable with.

If you are tired of waiting in line to do your pitch on El Cap or Half Dome, but you are dying to climb, try Sentinel Rock. This wall offers 1500 feet of solid granite climbing, but due to its rather difficult approach and descent, it does not get nearly as much traffic as the more famous walls of Yosemite. In addition, being a north-facing wall it stays cool during the summer months.

Great mix of a story & beta...great photos don't hurt either. Looking forward to more TR's from you Marc. Cheers!

Thank you so much Radek. I have more stories of wall climbing to tell than anyone would be interested to hear. But, I will try.
Thank you for your encouraging comment, and your votes.
Happy climbing,
Marc

I have a good one I'm working on now. You may end up laughing and feeling sorry for us at the same time. I'll let you know when it's ready to come out.
As far as the difficulty of the Sentinel goes, we did only up to 5.10 pitches free, and you can aid the 5.11 pitches. I even aided or hung from pieces on many parts of the 5.10 pitches. Glad you liked the story.