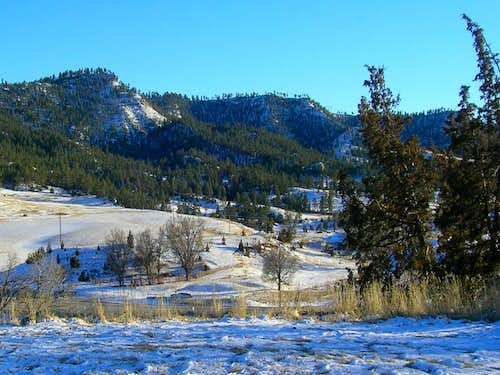 The Seven Sisters Range is defined by its isolation from other mountains in the Black Hills by the natural divisions of the Cheyenne River and Angostura Reservoir to the south and southeast, the Fall River to the north and northeast, Shep's Canyon to the south and southwest and an un-named dry stream course through a low valley to the west. Rising 600 to 700 feet somewhat sharply from the valley floor to the west-northwest, this small range covers perhaps 25 square miles in Fall River County. There are six ranked summits within the range, plus many more unranked peaks. The range is characterized by numerous canyons that drop from the high west side of the range to the east-southeast, ultimately emptying into the Cheyenne River watershed. The elevation of the Seven Sisters Range varies from 3060 feet to 4425 feet. 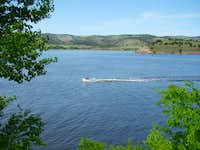 A curious feature of Seven Sisters Range is found in the 1930’s book, The WPA Guide to South Dakota. The book states, “Near the top of the Seven Sisters are the sunken wells – holes in the ground ranging from 15 to 40 feet deep. The wells are caused by underground water eroding the limestone layers, leaving an unsupported roof which in time drops. It is said that animals have occasionally been found in the bottom of these wells, the ground supposedly having given away beneath their weight.” Holes like these are also found in nearby places like Parker Peak and Matias Peak, or more distant Black Hills summits like Hat Mountain near Deerfield Lake.

While there are significant areas of grasslands in the Seven Sisters Range, there are also significant areas of forests. Ponderosa pines are the most common trees in the range, but aspen, cottonwoods, oaks and cedars are also found there. Because of the lower overall altitude of this southeastern edge of the Black Hills, cactus, yucca and sagebrush are also commonly found. Deer, antelope, rabbits and wild turkeys are the most common wildlife in the Seven Sisters Range. However elk, pronghorn antelope, coyotes, mountain lions, foxes and bobcats are also found there.

Peaks of the Seven Sisters Range 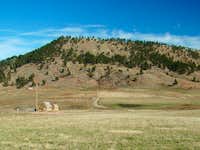 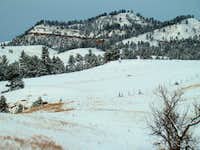 Local tradition holds that the first settlers to the area in the late 1800’s had names for all the Seven Sisters. The WPA Guide to South Dakota said “…seven peaks of sandstone, so similar in appearance as to height and slope from the north that they were long ago named the Seven Sisters by some of the earlier settlers.” Many of those formerly visible sandstone features are now hidden by thick forests on the western slopes. Since there are actually more than seven summits in the range, it is not clear which peaks inspired the range name, or even if there were truly seven unofficially named summits. No doubt, the view from the valley to the west was the reference point for the naming of the Seven Sisters Range.

The only individual peak name that seems to have survived to present times is for the northernmost peak in the range, Catholicon Mountain, an unranked summit. 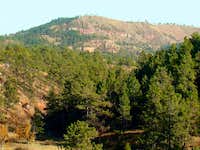 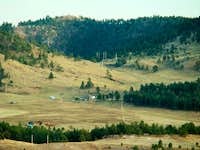 Another name that survived is for the hill at the western foot of Catholicon, which is called Sugarloaf. Neither of these names appears on official maps, but they are carried on by local tradition. The local historical society, along with the Pioneer Museum and librarians in charge of local history materials at the Hot Springs Library have been unable to find any source materials or even clues from local senior citizens as to what the rest of the reputed Seven Sisters summit names were. 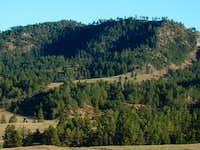 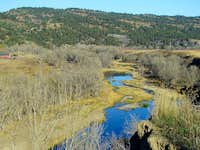 The six ranked summits of the range show up on maps, like those posted in Lists of John, simply by their summit elevations: 3755, 4210, 4298, 4315, 4371 and 4425. Four summits in the Seven Sisters Range are generally accessible to the public. Two of those peaks, 4298 (Brady Peak) and 3755 are ranked summits, while two others, Catholicon Mountain and a 4190 foot summit we shall dub “Boehnlein Ridge”, are unranked. Ranked summit 4210 is also on public lands and has an unbroken area of public lands access between the summit and Sheps Canyon Road. But, it is an arduous off-trail hike that requires a long trek over several canyon systems plus some careful navigation to avoid trespassing on adjacent private properties – a hike that would be greatly aided by a good GPS. 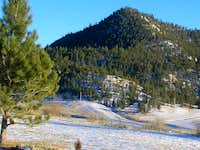 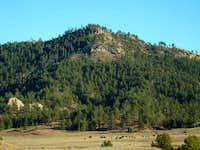 The other three ranked summits are the three highest peaks in the Seven Sisters Range, but are all on private property. 4425, 4371 and 4315 are all owned by one property owner who has been almost completely inaccessible to contact for permission to hike. That same property would also offer a much easier access route to 4210. The only one to summit all three peaks was a climber who managed to get that elusive permission.

Canyons of the Seven Sisters Range 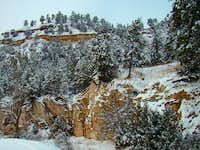 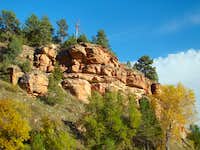 Besides the Fall River Canyon on the northern boundary and Sheps Canyon on the southern boundary, notable canyons in the Seven Sisters Range include Brady Canyon, Boehnlein Canyon, Slaughterhouse Canyon, Wall Canyon, Red Canyon (not to be confused with the larger and more famous canyon farther west in the county), Adams Canyon and the Knappie Canyon system (the largest within the range). The northern canyons tend to be narrower than the southern canyons. Slaughterhouse Canyon is the narrowest and has dense forest growth in the bottom, making hiking the canyon floor extremely difficult. Canyon walls in the Seven Sisters range tend to range in height from 200 to 400 feet, with some being rather steep and rocky while others are grassy and more moderately sloped. The Fall River Canyon that defines the northern reaches of the Seven Sisters Range is probably the most scenic, but is also the most developed with unsightly power lines marring many otherwise great views. 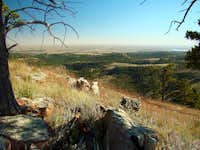 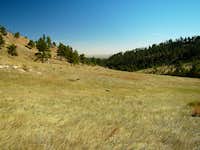 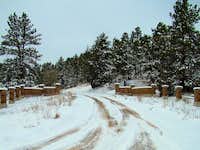 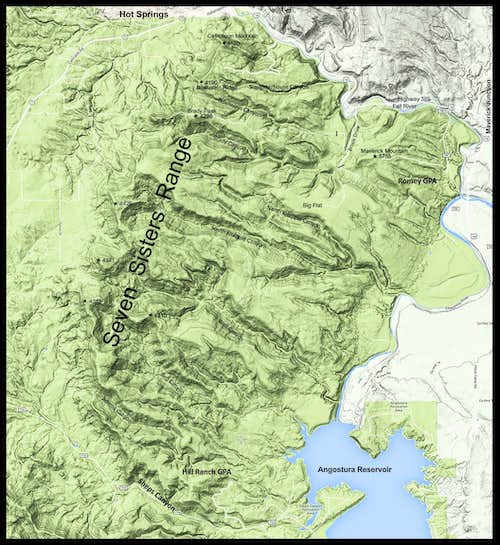 Probably the best current access option in the northwestern Seven Sisters has proven to be access through the Allen Ranch in the Fall River Canyon. There is a very old and steep road up the north side of the next summit ridge south of Catholicon Mountain. Once past the steep and eroded part of the road, the path heads west-northwest to a small summit and the edge of the western uplift of the range. This western rim provides obvious off-trail routes to both Catholicon Mountain to the north and the summits to the south. Catholicon Mountain’s summit is on private land, but there have traditionally been no restrictions for hikers there. The next real summit south of Catholicon Mountain, "Boehnlein Ridge", is on federal lands. So that poses no problem. The third summit, 4298 ("Brady Peak"), is on a private land trust, but seems to have no posted “no trespassing” signs. You can access a SummitPost page for this northern route by clicking on this link: 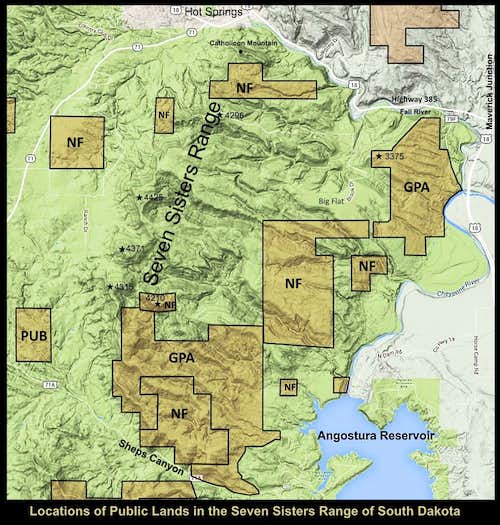 Brook Drive provides a short access route into the north-central Seven Sisters by way of easement through private property. This road is very rough and sometimes impassable because of mud or deep snow. The road runs from the mouth of Brady Canyon south to the area where Brady Canyon turns to the west. All the land around the road is private property posted “no trespassing”, so this is pretty much a short fair-weather sight-seeing hike. There is a branch off Brook Drive that goes in a general westerly direction all the way out near the summit of Brady Peak. But that road has a locked gate and is posted “no trespassing”. At about .8-mile, Brook Drive turns into a private road with a locked gate and also posted “no trespassing”. Beyond that gate, the road climbs up to the area called Big Flat, where there is an old landing strip.

The best public access into the southern Seven Sisters is by way of the Hill Ranch GPA road near Angostura Reservoir. There is a SummitPost page for this here:  Seven Sisters Southern Route

While the road has no branches open to vehicles into the state GPA and federal lands, the old roads that do branch off to the west are open to foot travel. Peak 4210 is on public lands, with a potential public-lands access route from Sheps Canyon Road and the Hill Ranch GPA road. But it could be a significant bushwhack that would require some good navigational skills to avoid trespassing on adjacent private property. Careful study of maps, particularly satellite maps, will show what canyons and peaks those old roads in this part of the Seven Sisters will take you to, or near. Of course, if you prefer to bushwhack into the southern Seven Sisters, you can start almost anywhere along the lower section of Sheps Canyon Road, where it borders the state GPA and federal lands.

The Romey GPA on the northeast side of the Seven Sisters does offer a good access route to the summit of 3755 (Maverick Mountain). You can learn more about this at the SummitPost page for Maverick Mountain.

When to Hike & Climb 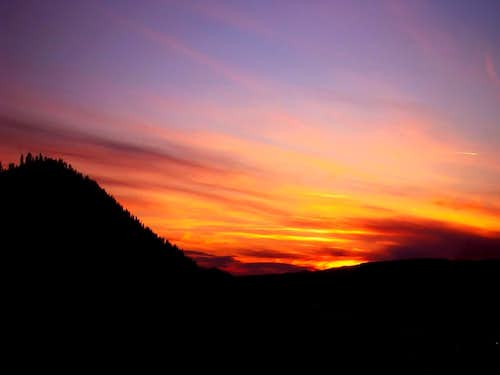 Since the Seven Sisters North Route is dependent on a faint old forest road, you can be sure that the route will be obscured by any significant snowfall. The same could be said about the route up Maverick Mountain (3755), Brook Drive in the north central area of the range and the GPA access road into the southeast part of the Seven Sisters Range. That same snowfall will create hazardous footing for any bushwhack attempts from the west. Flash floods can occur in the canyons following heavy downpours. Because of the solitude in the range, bad weather rescue is not something to count on. Cell phone reception is almost non-existent down in the canyons. Clearly, bad weather conditions will be your greatest concern. For the latest weather forecast and conditions, click on this link:

There is some hunting that occurs each year in the Seven Sisters Range. But, the same limited access most hikers have in the range also happens to many hunters. Nevertheless, wearing orange during popular hunting seasons is a good idea. You can learn more about the South Dakota hunting seasons at the link below:

Red tape you will encounter will depend on what type(s) of land you are on. Private property restrictions will be dictated by the owner of the land you are on. National forest lands have their own rules, chief of which in this area concern illegal campfires and fireworks. State lands have their regulations posted at their access points. Their chief concerns usually center on camping in unauthorized areas, illegal campfires and fireworks and carrying the wrong kinds of firearms during specified hunting seasons. Check the agency contact information below to get answers for specific questions you may have. 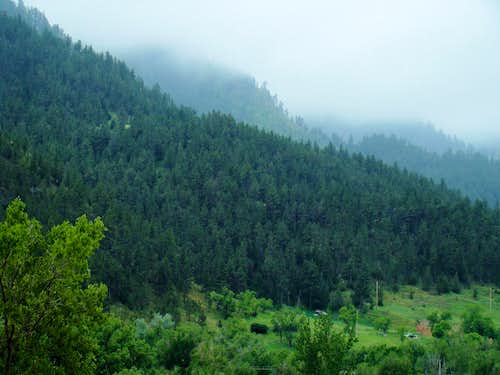 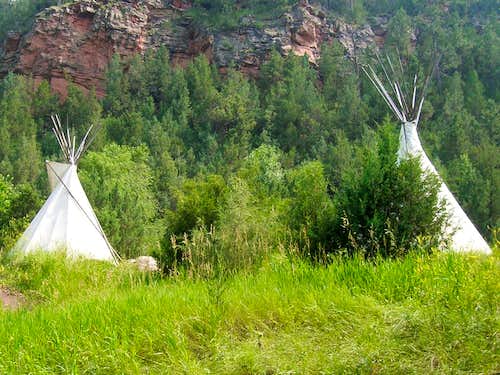 Camping will need to be done at nearby campgrounds or in the Black Hills National Forest lands. Your best bet is to camp at the Allen Ranch, the location of the trailhead for the Seven Sisters North Route. Angostura Reservoir has camping, but the majority of it is on the south shore. If you can get north shore camping, then you are not far from access through the Hill Ranch GPA into the southern part of the Seven Sisters Range. For more information on nearby camping and national forest camping, click on any of the links below.

The Black Hills National Forest allows back-country camping except where posted, however campfires are prohibited. You can access their camping regulations at this link: