Seymour Peak located in Mount Rainier National Park one of the little known eastern side peaks in Mount Rainier National Park. It is known for its northern dome like structure that towers over the valley and help makes Seymour Peak stand out from the others. It is along a long connect ridge that helps it connect with the more prominent and technical Dewey Peak. Seymour Peak is an off-trail peak and there is no trail that connect from it. As a whole the easiest route to the summit is a Class 2 off-trail scramble with a touch of exposure near the true summit area. It should be noted that the the northern dome is not the true summit. However the northern dome has arguably better views of the surrounding peaks. It looks hard to get to from the true summit can be accessed from the true summit via a simple Class 2 scramble along the ridge. Stay away from the cliff edges along the way. 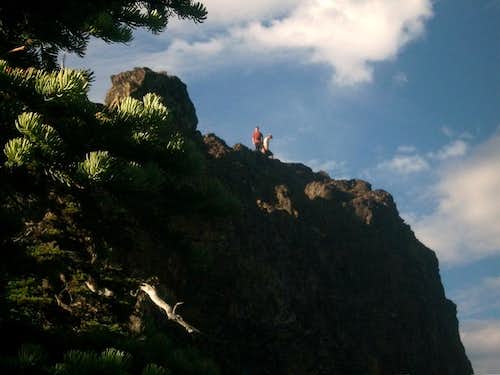 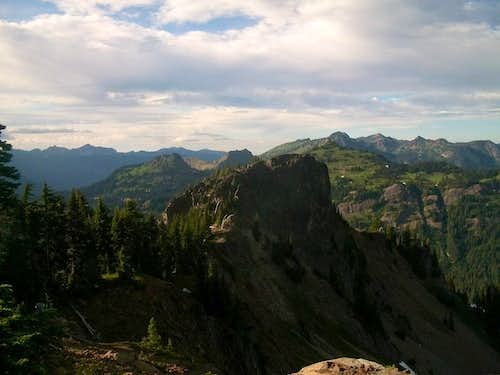 The true summit area is partially wooded. There are two knobs on the summit area, one that is completely open and one that has some trees on it. The difference in elevation between the two are merely a couple of inches. Unfortunately we did not find any logs on the summit. Views from the summit and the north peak include a closeup shot of Mount Rainier, and distant shots Mount Hood, Mount Adams and Mount Saint Helens. Bring a camera because there a lot of good shots being taken from these summits. 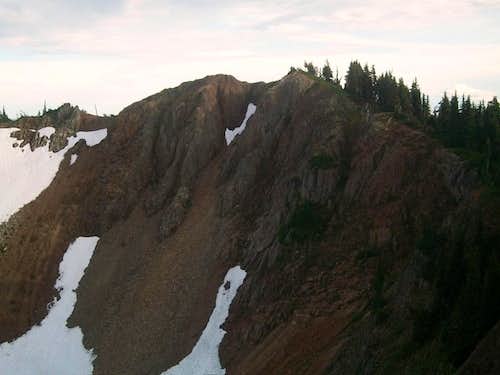 There are two ways to head up to Seymour Peak. The first is via the Pacific Crest Trail from Chinook Pass. From the Chinook Pass parking area take the Pacific Crest Trail roughly two miles to Dewey Lake. At Dewey Lake look for a faint boot-path (if available) heading southwest towards Seymour Peak. Stay on the boot-path all the way up to the base of the scree or snowfield depending on what time of year you are climbing Seymour Peak. Once you get on in the snow/scree field head right on up the field to the ridge just east of the summit area. This will be a 40-50 degree scree field and in summer when there is no snow this Class 2 scree field can be quiet tough to descend. It should be noted that there is literature of a ridge-line scramble which will avoid this tougher section. From there just head for the true summit. 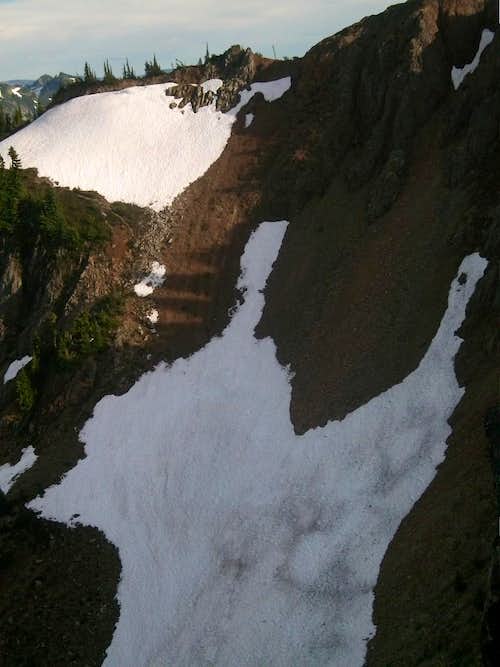 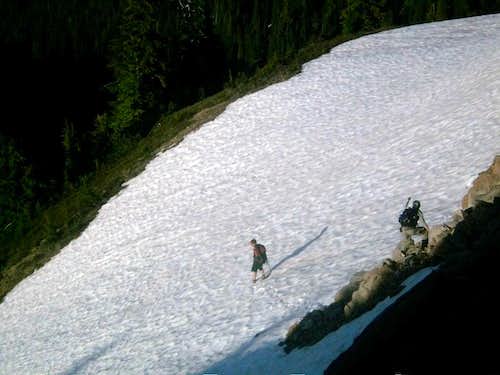 The second way is from the bend in the road on Route 123 right where Dewey Creek is located. This is less desirable route because the route requires bushwhacking for the first mile and 800 feet of elevation gain. The forest here is very doable and at time there game paths and boot-paths through this section. Once you get higher up you want to head to your right past the cliffs that connect to the northern dome and follow the stream bed all the way to a faint boot-path. Take the faint boot-path that goes over the west side of the creek all the to the cirque valley where you will connect with the same path as the one from the Pacific Crest Trail. Take the path all the way to the scree field where you will then ascend the a Class 2 gully filled with loose scree all the to ridge-line just before the summit. From there head a 100 yards west over moderate open and exposed terrain to the true summit of Seymour Peak.

VIA 410 BY CHINOOK PASS: The trailhead to to Yakima Peak is located on Highway 410 roughly a fifth of a mile east of Chinook Pass. Park on in the parking area on the northern lot towards the ridgeline in the obvious parking area that also has bathroom facilities for guests.

FROM ROUTE 123 BY DEWEY CREEK: From the intersection at Cayuse Pass head down Route 123 from roughly two miles until reaching a bend in the road by Dewey Creek. Park in the in the turn out roughly 200 feet from Dewey Creek.

Trailhead requires a Northwest Forest Pass if you are using the Chinook Pass for more than 30 minutes. $5 par and $30 for the year. For the turn out nothing looks to be required, however it is good idea to hang something in the window to identify yourself as a hiker and not a broken down vehicle.

Because the Pacific Crest Trail is the approach trail to the peak and the peak is located in the National Forest Service area (not Mount Rainier National Park camping is plentiful). The parking area is a day use area though so try to find an alternative parking area if camping near Tahtlum Peak.

Howeer Seymour Peak is actually located in Mount Rainier National Park so once you leaves Dewey Lake you will be required to have a Backcountry Permit for camping on the summit for Seymour Peak.