Shasta was our final destination for the week or so we spent in the PNW. Already we had checked off some huge and some fun lines.

Needless to say, we were pretty worked towards the end. We had made it to Shasta and the weather was still forecasted to be bluebird.... What luck! We've had some seriously amazing days for springtime in the Cascades! I had previously skied Avalanche Gulch and although my partners were jonesing for a 50 classic ski descent, I convinced them otherwise. My rationale was that Avalanche Gulch is really a boring & simple route (sorry if I hurt some feelings). While it's a good line for budding mountaineers.... Well, that's exactly what it is known for and EVERYONE and their 100cm ice axe is doing it. I know this statement may sound a bit harsh, but there are some really good lines on Shasta that are often overlooked and underated. Instead, we were looking to go out with a bang, why not ski something that's arguably better than the south side? Plus, tagging Shastina as well would make a ton of sense. This took us to the West side of the mountain, but still starting from the easy access, Bunny Flat Trailhead :) 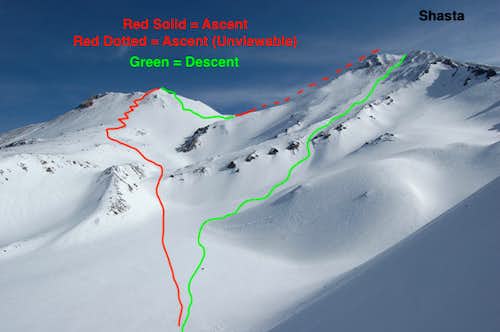 Starting somewhere around 6AM from the trailhead, we began the morning in shorts sleeves and softshells.... Ahhhh, Springtime. 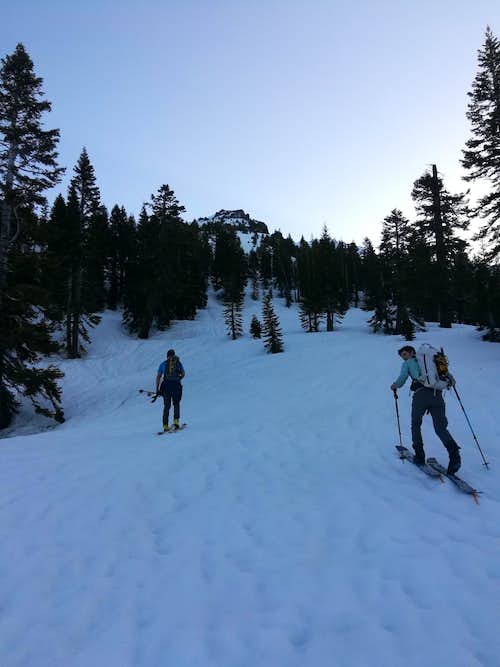 We followed the standard south side trail until we reached the drainage that heads up to avalanche gulch. From there - a quick bump over the SW Ridge. 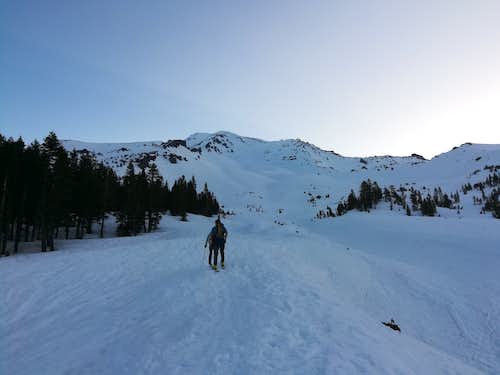 From there, we skinned up and alongside the SW ridge. It was a little tricky, as the snow was firm and there was some sidehilling. Overall, we made it through without issues and reached the basin below the west face (our line of descent) & the south face of Shatina (our first line of ascent). The south face of Shastina was an easy skin that afforded no technical difficulty... Switchback, Switchback and then a short boot to the top. 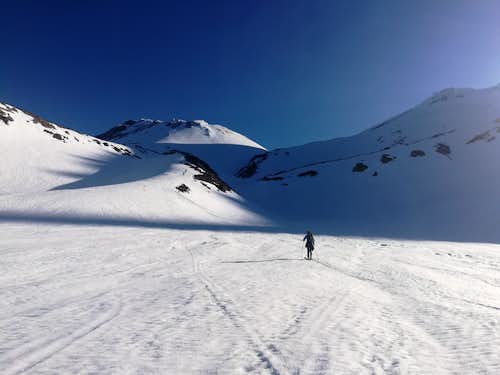 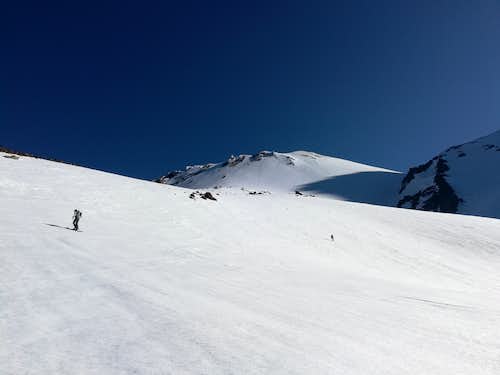 Although, towards the top we started to encounter rime and wind, which certainly would make for some horrible skiing (it did!). See summit rime in photo below :( 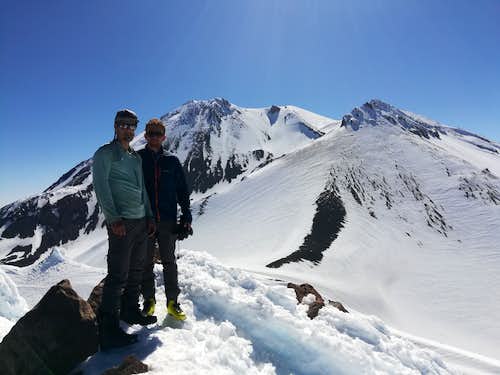 Skiing down the east face of Shastina was pretty horrendous, but the setting kept our spirits high. We were hoping things would be different on the spaceship up high. At the saddle between the two peaks, we skinned up a small ridge and then bumped around to the NW/N side of the mountain where we linked up with the Whitney Glacier. From here, there was a little bit of booting to hug the cliffs and stay away from the bulk of the crevasses, but otherwise it was very simple. Here is where we encountered our first party, who were completely gripped on the 'steep' snow.... Hmm....

I was patient & coached these guys through and had them follow my route. I assured them that I would put in some nice kick steps and we would reach the normal climbing route, which they could then safely descend. To clarify, it is a VERY straightforward climb on the Whitney Glacier, I solemnly swear I am not sandbagging. Once we had all made it on the plateau, the two mountaineers were quite thankful and proceeded to pull out BUTT SLEDS *head smack*. Dear Lord. 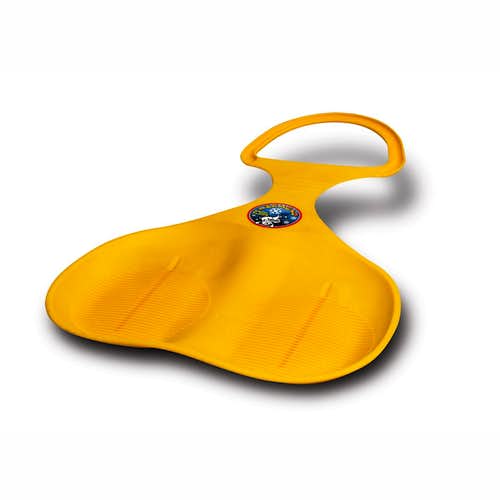 I had never seen this strange contraption before. Definitely more fun than walking, I guess.... But about .0001% the fun of skiing!

Overview of upper Whitney Glacier. The two mountaineers mentioned above were pretty gripped towards a steep snow section near the rock on the upper right hand corner of the photo. It is a very small glacier and in a springtime snowpack, we felt fine without ropes. Conditions were firm. 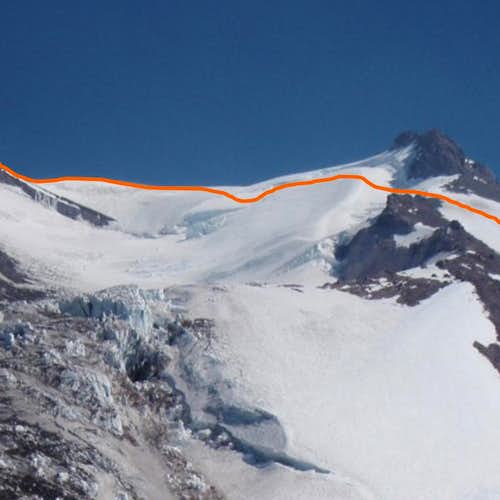 What our route looked like in early May (See Whitney Glacier to summit in background). 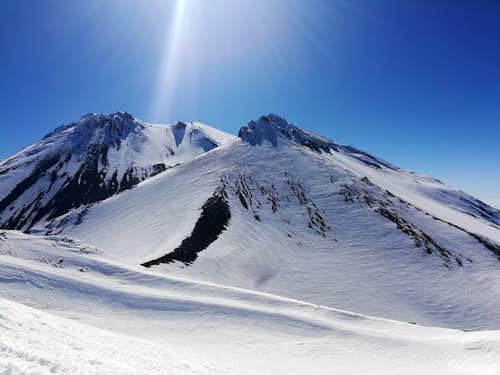 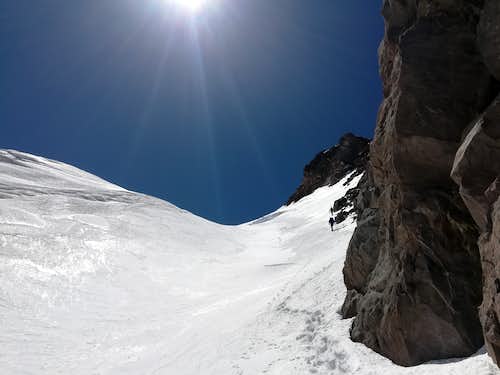 From the flat ridge, it was an easy walk to join up with the climbing route, just under the main summit of Shasta. 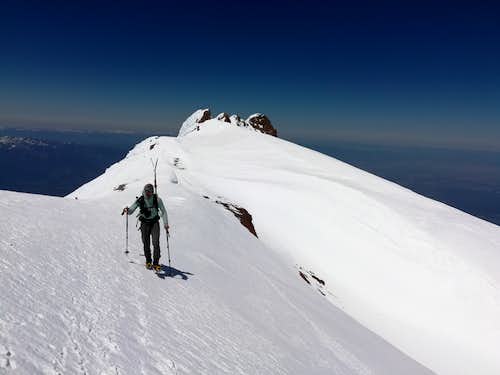 Here, we were greeted with hordes of more than 100 climbers, at least. What a mess. My friends were now in agreement that we made the right call with our choice to travel a different side of the mountain. We could see the snow on the summit was not actually snow, more like cauliflower. Oh well, we decided to carry our skis up anyways.... Gotta ski off the summit to count, right(??) From the summit, we were quite early, so we decided to hang out and enjoy the views.... Our route wouldn't be 'corning up' for another hour or so. I tried my best to be pleasant, I really did :) 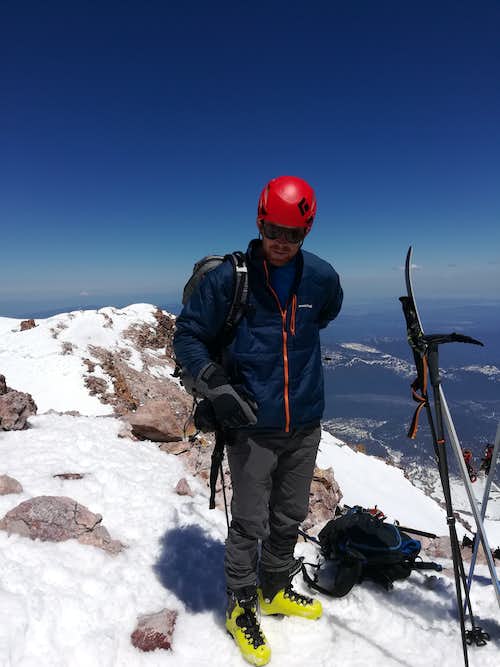 Eventually, impatience got the best of us and we decided to ski from the summit to the west face proper. As I was skiing down, I bumped into a Cascade ski friend, who I met on Mount Stewart, skiing Ullrichs Couloir... Small world! This guy had inspired me to become a better skier, so I was happy to bump into him again. They were having an epic spring skiing roadtrip as well. To note, there are ALOT of skiers on Shasta... Maybe as much as people walking to the top? 5 minutes later, I bumped into another ex-Wasatcher on top of the West face. Unfortunately, she had taken a bad fall on an icy slope and had an accident about a month prior, so both of them were incredibly timid and nearly scared us into waiting to ski the west face. Considering the sun was shining and how warm it was, I let my gut feeling take over and decided the route would be soft and it was time to rip!

From there, it was 4000' of fall line corn... Beautiful! Not a single icy turn from top to bottom. The beauty of nailing the timing on a springtime descent is that it doesn't take much to change conditions from scary to happy. Corn is the ultimate confidence booster. Once the surface is soft, skiing feels heavenly. When I got to the bottom and rejoined our old skintrack, my friends were still up top.... Apparently they had been convinced, by previously mentioned timid skiers, they were about to drop into slide for life conditions *Headsmack, again*. I decided to pull out the trusty cell-phone and ring my buddies up top to tell them the skiing was excellent and they had better drop in before it got too soft. A few minutes later, they were ripping down the face and clearly enjoying themselves :) 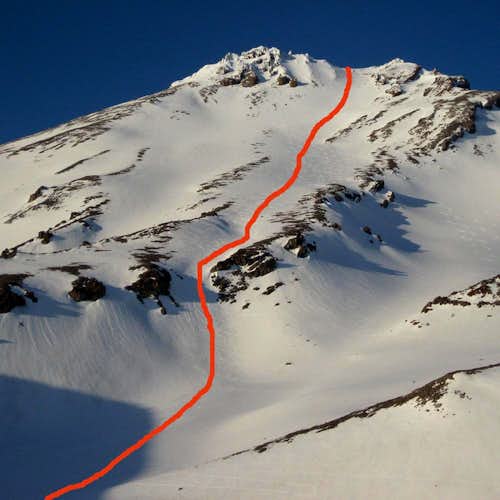 Back in the basin, we followed our skintrack and sidehill skied across the SW ridge, back onto the south side of the mountain and on the avalanche gulch ascent track. Straightforward and playful skiing had us back at Bunny Flat in no-time. What a day! Total stats 15 miles and 8000' of elevation gain. The end of our Cascade Corn Tour. Shasta rules!