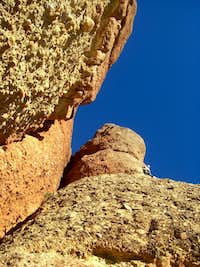 Chains of Passion, 5.10b
Parowan Gap is a quiet remote crag located due west of Parowan, UT. The gap is more popular for its petroglyphs, than climbing, which are featured in most of the local tourist rags. That being said, you still normally find yourself alone on the paved ranch road out to the gap. They named the wall, hidden to the right of the significant Parowan Gap feature, Roller Rink because “it is a bit of a roller derby to get to the base”. However, the cobblestones are really not difficult to navigate to get to the base of the wall. 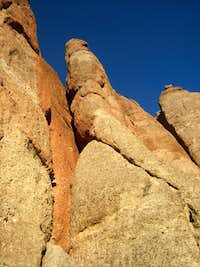 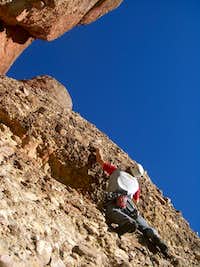 The main walls you face from the parking area are collectively named Shinobe after an Anasazi God. Although cobblestone climbing gained popularity at Maple Canyon, don’t expect the cobbles to be as solid at Parowan Gap. Once I released foot pressure on a small cobble on “Chains of Passion, 5.10b”, I barely caught the resulting loose cobble before it rained down on my belayer 100’ below. The whole crag is comprised of welded tuff (hardened volcanic ash) and round river rock cobblestones (conglomerate cliffs= rock consisting of individual stones that have become cemented together) which make for some very interesting climbing. It reminds me some of Solstice Wall in that the upper grades are interesting because looking up while on the vertical routes, the moves are not obvious as there are so many “fake” options. What you see is a ton of cobblestones sticking out of the sediment, and of course you do not always know which ones give you any purchase. Solstice Wall is a completely different kind of rock, textured limestone, but gives the same illusion when you get past 5.10b. Trusting these cobblestones for the first time is also a mental test of sorts. You can clearly witness where they have pulled out of the wall.

Climbing development at Parowan Gap started in the mid-90’s. Parowan Gap has 18 published routes and quite a few unnamed routes as of 2008. Shinobe is the main climbing crag and is comprised of several walls straight above the parking area. It can be reached from either end via faint and almost non-existing trails. At 6000’ but south facing, Shinobe can be climbed just about every month of the year. In late October it was even a bit warm.

Routes are Listed Left to Right, West to East
This is the best route I have done so far at Parowan Gap. Really aesthetic line that runs up to the base of the pillar on the left side of Shinobe. Pull through a slight overhang, then through several bolts on easier ground until you reach the crux which is a steep section of trusting small cobblestones! I did release one here and caught it before it fell on my partner below. Takes a little nerve to lead this one I must say. If you can climb 5.12 on suspect rock, keep following the pillar up. There are 11 bolts to the anchors, not 10 as the guidebook suggests. You cannot see the anchors until through the last bolt or two.
Good warm up route, easy for the grade if anything. Plenty of stuff to grab onto up a short vertical white wall on the right side of Shinobe. Five bolts to anchors.
Took me a bit to figure out the crux move on this at about the 2nd or 3rd bolt. Kind of a side pull to the right deal. Five bolts to anchors.
Tough move to be sure at the grade. At about the 4th clip you come to a smooth large dark cobble out left. Look for a crimp hold up and right to sink your fingers and balance your feet up on a large white cobblestone below the small roof pull. Todd bolted this crux section well. More than five bolts as the guide suggests. Might be missing a cobblestone making it a tad harder than the published grade.
Easy 5.8 pitch that shares the same anchor as “No More Mr. Nice Guy”.

Need a 60m rope to rappel the better routes. At least 13 draws. We observed a trad route worth pursuing here and will come back with large gear to give it a go, 3-4 pitches up hands and off width in the middle red section. Remember, you are over 3000’ higher than Saint George, so if you are visiting Parowan Gap in the early spring or late fall, or even winter, bring a decent jacket. It would be possible to climb here on a sunny and warm winter day, it is pretty dry.

Take either of the Parowan exits and head east into town keeping an eye out for the BLM petroglyph sign on main street. Head west on Gap Road out of town. It is a remote, but paved, farming road that heads for the obvious gap. Pass a white sands dry lake bed on your right and continue as the significant cliffs of Parowan Gap come into clear view. The guide book references parking on the south side, but there is a dirt road on the north side that takes you to the start of the trail up the right side of the feature to reach Baked Potato and company. Parowan Gap is approximately 11 miles out of town.

Raptors have screeched at us in July, but were not present in October. The only visible nest I have seen is back where the Roller Rink is. I would suggest staying off of the Roller Rink from March through June which is their nesting season in southwestern Utah.

The BLM manages nearly 22.9 million acres of public lands in Utah, representing about 42 percent of the state. The regulations regarding most BLM land are fairly wide open compared to State and Federal parks.

July is really to hot to climb here, but that is when we climbed the Roller Rink routes. Shade factors in about 4:00PM in July for Roller Rink. Most routes at Parowan Gap would be too hot no matter the time of day during the heat of summer. Late October was fantastic, but still a bit warm.