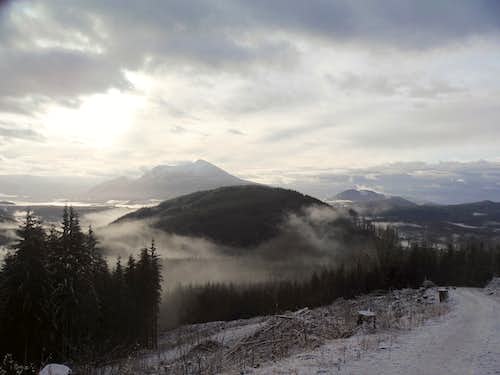 Great view on Miniature Mountain and Mount Pilchuck!
Siberia Mountain located just outside Granite Falls on the Mountain Loop Highway an out of the way peakbaggers destination. Siberia Mountain is not known by the common man due to its small height and summit which lacks any sort of views. However in high avalanche days in the higher mountains or less than ideal conditions in the mountains for peaks like Mount Pilchuck, Vesper Peak and others in the area, Siberia Mountain does make a good alternative. 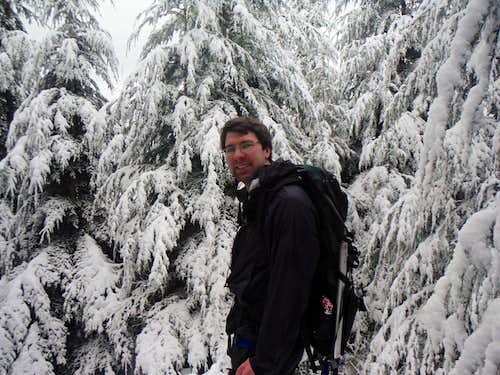 JordanH and frosted trees near the true summit.

Yes trying to find the summit on Siberia is like playing “Where is Waldo” in through thick trees and bushes where your visibility is less than great. A good GPS is clearly worthwhile to bring for this mountain.  And the total roundtrip distance to knock off Siberia Mountain is around 12 miles with most of it being a long boring road slog. But on the way up to Siberia Mountain there are a number of clear-cuts that now give excellent southern views of such mountain as Olo Mountain, Blue Mountain and the towering Mount Pilchuck . Just the views alone of Mount Pilchuck make this peak very worthwhile. Siberia Mountain also has over 1400 feet of total prominence which make many avid peakbaggers want to choose this mountain. From Seattle to the trailhead of Siberia Mountain take no more than an hour and fifteen minutes which makes it convenient for those peakbaggers that live in Seattle. 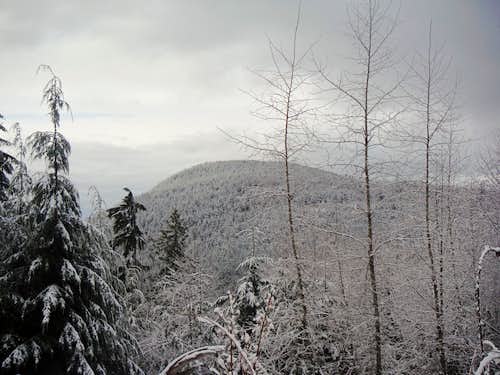 Personally I would save this peak or winter when there is snow on the mountain. Heading up a long gravel slog is not much fun if there is no snow. The bushwhacking might be a bit of a hassle with the extra snow but the bulk of the hike is a road slog. It should be noted that there is almost no risk of an avalanche on this mountain during winter. Siberia Mountain sees a fraction of the snow that other higher mountains in the region do. Some though really like to mountain bike here in summer and the roads here are perfect for that. Knowing that you can easily mountain bike within a few hundred yards of the summit would definitely make this peak much more appealing to some. 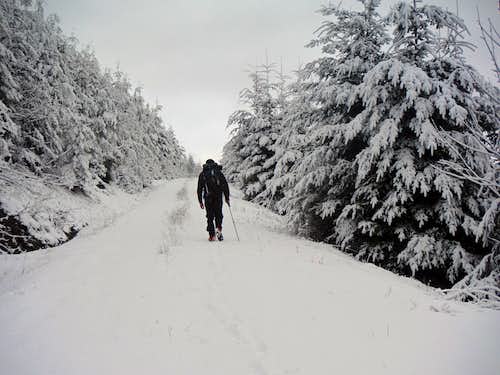 Looks like Siberia
As suggested earlier you definitely need a map and compass for this trip as well as a very good GPS if you wish to reach the summit. It is very easy to get lost or make the wrong turn because there are a large number of road intersections for this mountain. 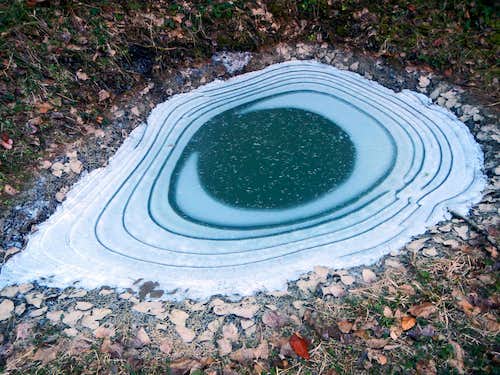 A frozen pond on Siberia Mountain looks like the Eye of God!!!

VIA THE START OF THE LOGGING ROAD: From Granite Falls take the Mountain Loop Highway four and a half miles until you see a sign saying "Masonic Family Park". Park in the gravel lot right to the side of the gate. Don't be fooled if it is open. These gates can close at anytime.

There are some items one should note before heading up Siberia Mountain. When going up to the summit of Siberia Mountain make sure to stay on only very well maintained roads. There are a number of roads that are not well maintained that look to be going the same way that you are. Don't follow them because they will not be the correct road. On the final road you want to leave the road just before the road starts to lose elevation. From there make a right and battle through the trees and bushes until you find the true high-point. 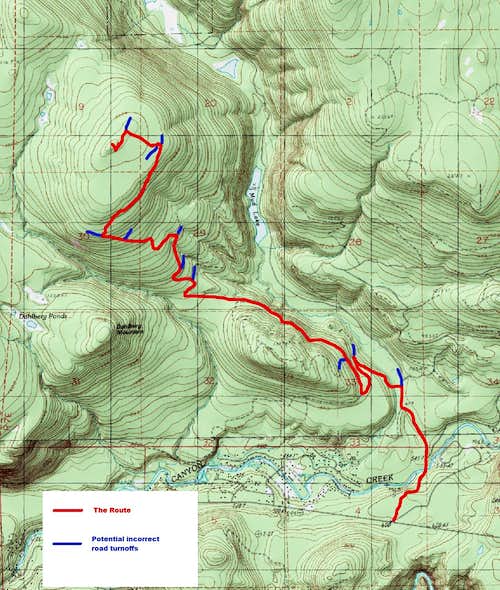 Only foot travel, horse travel and bikes allowed on the main dirt roads. No camping, fires or overnight parking is allowed.

This peak can be climbed year-round, but with a name like Siberia you probably would like to climb it in winter. Last bushwhack though is annoying when there is a lot of snow on the trees. If you are having a cold winter and you get enough lower elevation snow this peak would be very good to snowshoe all the way to the crappy bushwhack. 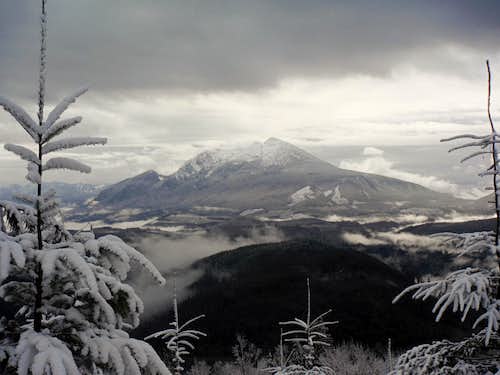 This land is owned by a private logging company Longview Fibre. Therefore there is no camping allowed on Siberia Mountain.

Siberia Mountain Peakbagger Page
Redwic's trip report on Siberia. Siberia was his 500th summit with more than 300 feet of prominence