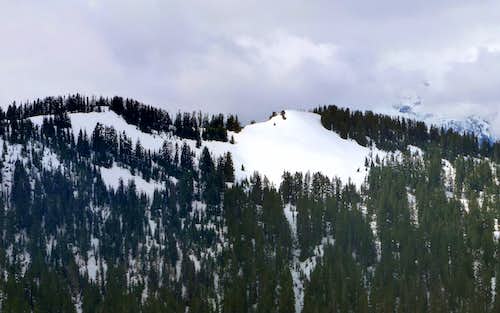 Silica Mountain from Point 5327. True summit on the left, false summit on the right.
Silica Mountain is a 5420' peak located 12 miles N/NE of Skykomish, WA, and 3.5 miles east of Jack Pass. It is a fairly simple and enjoyable class 2 scramble, assuming you are willing to pay the price of admission: a three-quarter mile walk down an alder-choked logging spur. Interestingly, views from the true summit of Silica Mountain are quite poor, while views on the false north summit (just 800' away) are expansive. Also offering great views in the immediate vicinity is Point 5327, which is just over one mile away, and is connected by a southeast-trending ridge. Peakbaggers will probably prefer to do Silica Mountain and Point 5327 together as a '2fer', as they offer 920' and 747' of prominence, respectively. 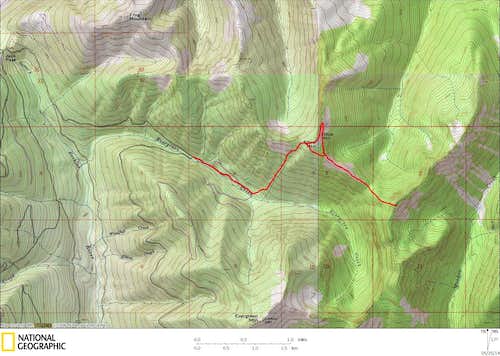 Silica Mountain and Point 5327 route map
From the parking location, look at the hillside to the northeast, and you will recognize the obvious grade of an old logging spur leading up Evergreen Creek. This road will be the 'crux' of your climb. Thankfully, it is only three-quarters of a mile to the base of the climb, but it is covered with nasty alder from start to finish. Do your fellow Summitposters a favor, and carry along a small pruning saw. A half-hour of 'gardening' by each person heading up this road would go a long way toward improving this approach. After three-quarters of a mile, the road will make a sharp right turn, and head toward Evergreen Creek. Stay straight here, and after a very short distance, you will enter an open meadow/avalanche slope. This point marks the start of the scramble. 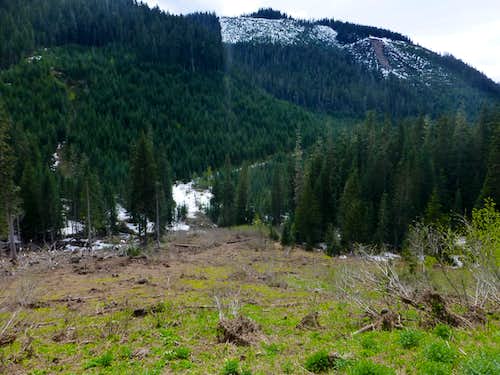 Looking back down at the road from the start of the Silica Mountain scramble
If there is no avalanche danger, proceed up the open slopes for a few hundred feet. During times with avalanche potential, stay low, and traverse a few hundred feet more to the southeast. Either way, your objective is to end up on the narrow, wooded ridge just to the right of the obvious creek that flows into the open slope (you will notice right away that this creek drainage has waterfalls and is unsuitable for travel). Now your job is very simple: Go straight up for 2200'. The slope is steep, but by the time you reach 3500', you will be in open forest, and the scrambling will almost border on 'pleasant'. Route finding is a no-brainer, as you will be traveling between two drainages that are separated by about 500'. We did encounter one small rock step near the beginning that we easily passed on the left. Surprisingly, we did not encounter snow (5-24-14) until about 4500' - this probably due to the fact that this is a south facing slope during a low-snow year. From here, the rest of our scramble was entirely on snow. We topped out on the ridge just to the west of Silica Mountain's summit - from here we had a good view of the false north summit. 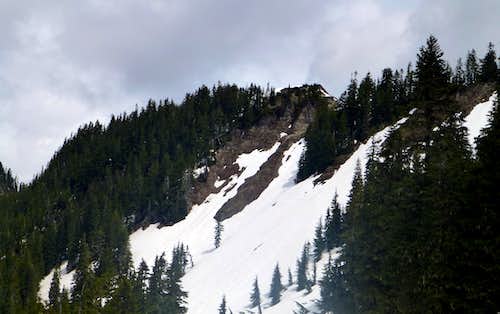 Silica Mountain north summit from southwest
From this point, five minutes of low-angle scrambling put us on Silica's summit. 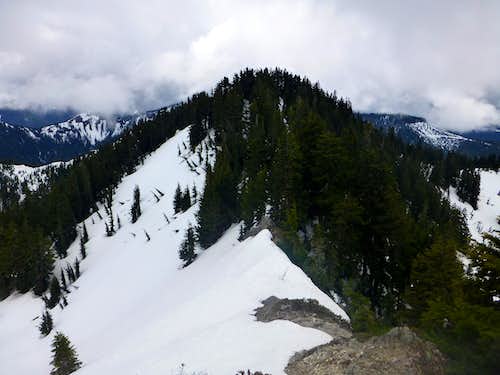 Silica Mountain true summit from north summit. Previous photo was taken from the saddle on the far-right edge of this photo.
As can be seen from the photo above, the true summit is heavily treed, leaving the views a little disappointing. We made a quick, five-minute scramble over to the north summit, and found it to be much more agreeable. Higher clouds prevented us from getting the views of the big peaks, but the local views were pretty good. 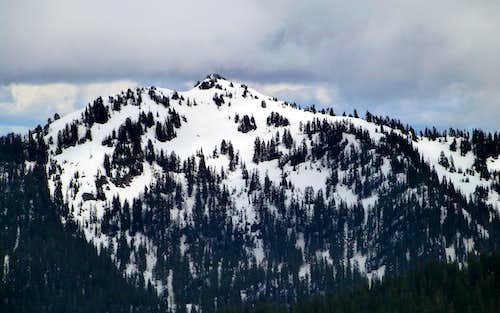 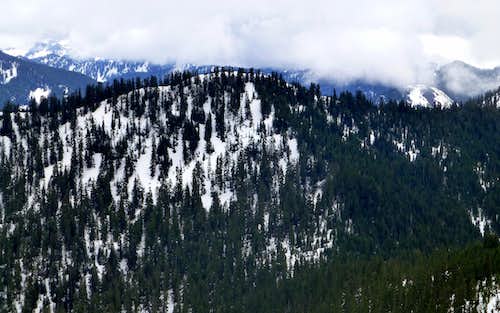 Point 5327 from Silica Mountain
If you have a little extra energy, be sure to make a side trip over to Point 5327. Travel along the ridge to Point 5327 is easy, but do understand that there is a 4580' saddle between the peaks, which will add some elevation to your day. 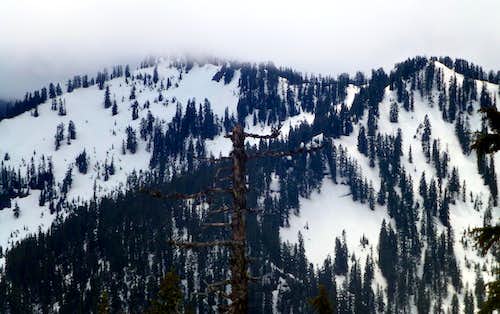 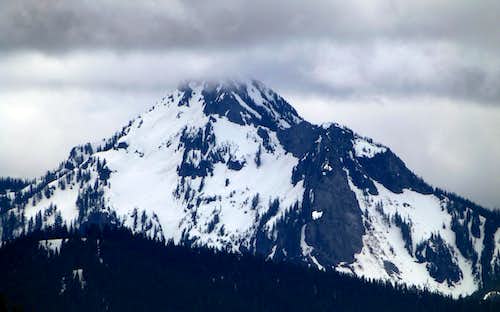 A parking pass is not required for this 'trailhead'.

This climb would probably be good in early spring, provided you were willing to hike up snow-covered FR6550/FR6554. Another option would be to head up Frog Mountain from Jack Pass, and follow the ridge to Silica Mountain. Late spring is probably the ideal time to scramble up Silica Mountain. Summer would probably be ok, as long as you are prepared to do battle with the alder forest on the approach road.

There are numerous campsites (both official and unofficial) on FR65 along the Beckler River.