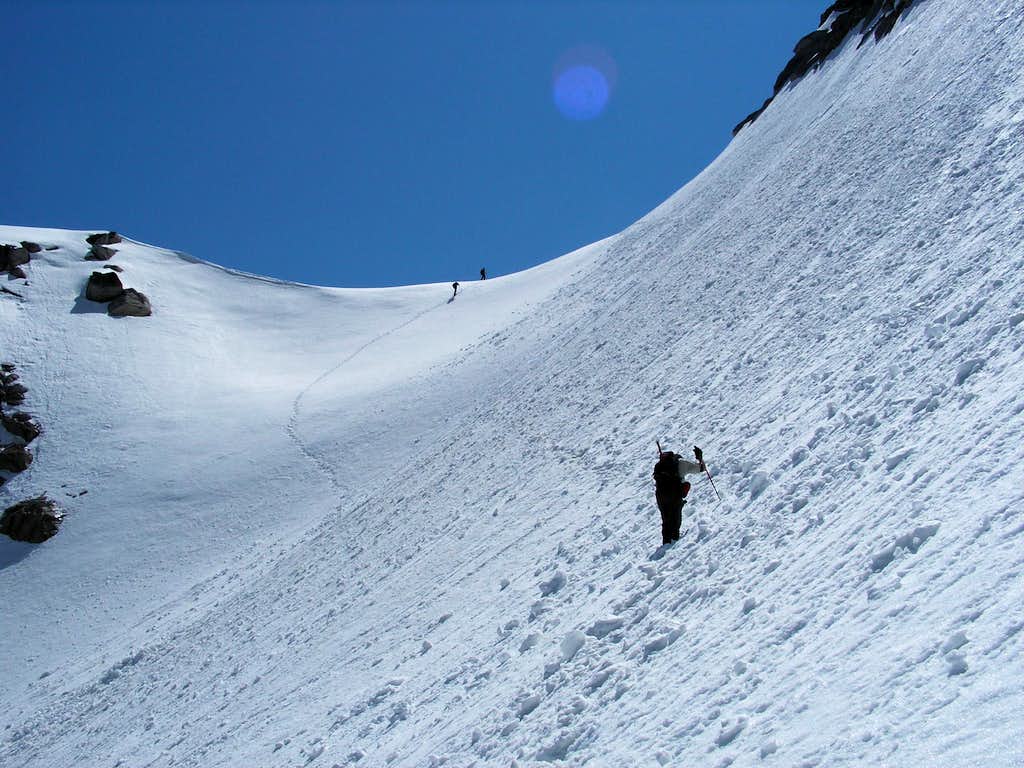 Descent made from Burgundy Col and traversing the east side of the wine spires to Silver Star Glacier and summit. 5/28/07
« PREV NEXT »

Hi Norman, when you guys crossed over this knoll (visible upper left) did you happen to take a photo of Chablis or Pernod? If so would you mind posting it?

Derek: I'm looking for that disk...found it. I posted one more picture looking that way, but if you want route info probably not much help. The picture is at the bottom of my trip report. I was impressed by the fact the Spires seemed more like a friendly ridge from the Silver Star Glacier side with solid rock. Are you heading that way?

Thanks Norman, I just wanted to take a look at it again, it's been a few years since I climbed the wine spires. I might take my daughter up Chablis and or Pernod this summer, if the weather is right we might head up Silver Star this weekend.

Norman, if you're interested the Beckey guide(s) are quite accurate in their route descriptions for both Chablis and Pernod. They are the easiest of the wine spires and both can be done in an easy day. The climbing on both is moderate 5.5 - 5.7 and not sustained.

Dereck: I hope you post pictures and a trip report when you go. I am reading Beckey...which routes are you saying are 5.5 and 5.7. Sounds good.

Norman, the standard route (I'm going from a 25 year old memory here) on Chablis starts from the glacier to the E, you approach from the same route you took up Silver Star. Observe the peak from the approach and climb up to the left, S, of the peak near to but short of the S notch. We found a rounded ramp, about 50’ short of the ridge, Beckey states there is a large flake in this area but I don’t remember that detail. We climbed up but mostly across the Face for a couple of pitches; there is some latitude in route choice here; so far to here the climbing is mostly 4th class. After the 2 traversing pitches we started obliquely up and right, we were aiming for the notch between Chablis and Pernod and followed the line of least resistance. We ended up slightly above the notch and somewhat on the E Face. The final pitch was the hardest of the climb but nothing seemed harder than 5.7 climbing and it was not sustained. I do remember that the last pitch climbed mostly up and to the left, finishing on a ramp which brought you to the springboard like summit, what a pucker factor! The summit was only suitable for one at a time and we climbed up and then down the last section singly.

Pernod was next; we rappelled down Chablis twice, near the NE gully, so we would be able to go around and below the steepest part [of the E Face of Pernod]. The climbing took us obliquely up and around to the N notch between Pernod and Chianti this section was 3 or so pitches long and the climbing was mostly 4th and 5th class. I can't remember the summit details so I’ll ask Eric if he can remember better than I can about this section and update this if needed. The descent involved retracing our footsteps along with some rappelling to our point of origin S of Chablis. We did the climb from our camp at Burgandy Col, the rock shelters we built are still there. We had 2 climbing teams of 2 on the route so we had double ropes for rappels. My wife, Leslie and another buddy Barry, climbed both the E and W peak of Silver Star while we climbed the two Wine Spires. We happened to finish at about the same time that they arrived below us from their summiting. If Eric or Mike have photos I'll post them, maybe post a trip report of our weekend.

Re: Chablis and Pernod

I can't add any details, except that it was cool and shady (or was it just a cloudy day?), and that we took turns slithering up to that final edge and hanging our noses over a thoroughly butt-clenching view down the other side. Recommended. Good luck.

Re: Chablis and Pernod