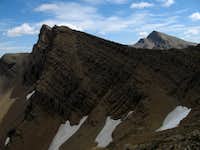 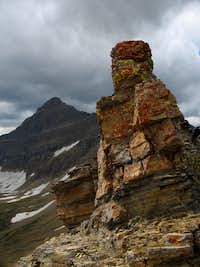 Have you ever found yourself in the following situation?

You're out with friends or family for the day. They enjoy hiking and love the mountains, but they are not climbers. The trail scenery is nice-- no, it's downright beautiful-- but you still have that itch to climb something, and it's getting worse and worse. You know you can't break away for something big and far, but if only there were something close by, something you could dash up while the others are having lunch and snapping those requisite group shots that you'd really rather not join, at least not until you've supped on a peak first...

The Siyeh Pass loop in Glacier National Park is one of the park's best trails for day trips. In fact, I would argue that no other trail (remember, for day trips) offers as much. Over the course of about 10.5 miles, you get all of the following and more: a high pass, mountain views, glaciers, gem-like tarns, tundra slopes, wildflower meadows, waterfalls, rushing streams, a spectacular gorge enclosed by red cliffs, and outstanding wildlife habitat. And although it's not a secret and you will probably see many other people, this loop doesn't see anywhere close to the traffic that the Hidden Lake and Highline trails, both originating from nearby Logan Pass, do.

And in addition to all that, there is an unnamed peak east of the highest point on the trail. The peak is less than a mile from the trail, and it offers a pleasant hike or scramble along an exposed ridge while delivering expanded views.

This peak is Point 8490 on 1:24,000-scale topo maps. On all sides but its western one, it is guarded by cliffs that drop hundreds of feet to more-level ground. By prominence standards, it qualifies as an official peak, but for some reason it does not have a name. And because the major peaks in Glacier do tend to have official names, which is not always the case in the ranges of the Northern Rockies, I have chosen to present this peak as a route objective and not as a separate mountain. Furthermore, the peak does not appear on the Glacier Mountaineering Society's list of officially and unofficially named peaks in the park, all the more reason not to make this a mountain page.

Two trivia bits about the route: 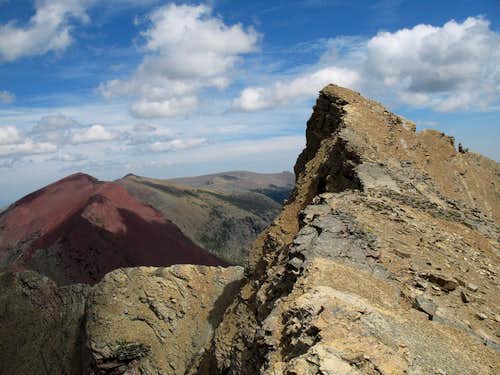 This route begins either at Siyeh Bend or Sunrift Gorge, both along Going-to-the-Sun Road on the east side of the park. Because the trailheads are about 5 miles apart and have an elevation difference of approximately 1150', it is better to start at the higher trailhead, Siyeh Bend. If you do not have two cars, utilize the park's free shuttle system so that you can begin at one TH and end at the other. You may want to use the shuttle, anyway, because both trailheads, but especially Sunrift Gorge, are very popular stops and frequently have no parking available between 9 A.M. and 5 P.M.

Because of the reasons explained above, I will describe this route from Siyeh Bend to Sunrift Gorge.

Remember that the trail does not actually cross Siyeh Pass. Instead, you climb to a broad saddle about 400' higher than 7750' Siyeh Pass.

From the trailhead at 5850', hike a short distance north along Siyeh Creek. The trail suddenly turns sharply east and then south and climbs into the trees. This is annoying for two reasons: the scenery is not very interesting for about 2 miles, and the trail eventually turns north again and continues north, going above and beyond your starting point. There is a tributary of Siyeh Creek a short distance north from the trail's initial bend that leads directly to the trail; why the route does not go that way is unknown to me, but perhaps it is too dense or steep or wet there to maintain a good, safe trail.

After a little more than a mile from the TH, you cross a creek and then reach an intersection. Go left; a sign points you to Piegan Pass and Siyeh Pass. 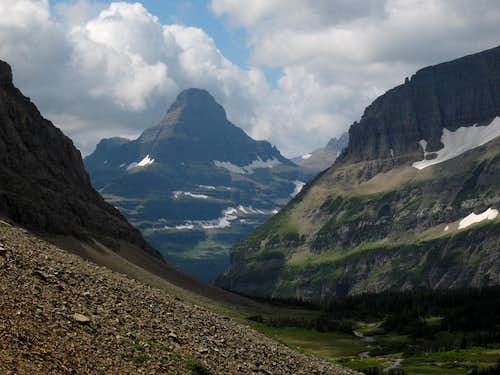 Now the trail climbs at a moderate grade for close to two miles before reaching another junction, where you turn right for Siyeh Pass. The stream you cross here is the one that goes almost directly to the TH. Along this portion of the hike, views begin to open up, and you get many nice looks at Piegan Pass, Piegan Glacier, and the waterfalls fed by the melting glacier. 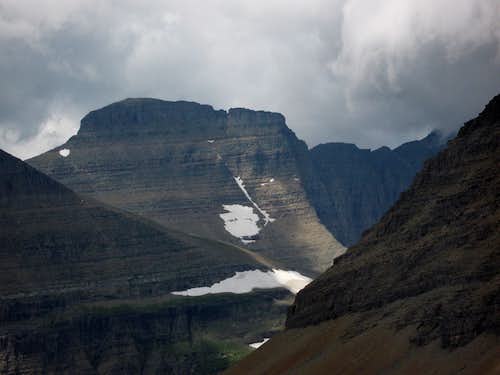 From this second junction, the rest of the hike is about as scenic as anything you will ever find on a trail. You enter beautiful Preston Park, where the trees give way to flower-filled meadows as Mount Siyeh, one of the highest peaks in the park and one of the few over 10,000', looms above. From the junction to Siyeh Pass (remember-- not the actual pass but a saddle south of it), you climb about 1200' in two miles, most of it in the second mile. It is sometimes very steep, but the views compensate and the switchbacks are constructed well enough that you don't feel the burn as much as you might expect to. Notice the tarns at the base of Mount Siyeh as you climb, and turn around occasionally to check out Reynolds Mountain, Piegan Mountain, Pollock Mountain, and Cataract Mountain. 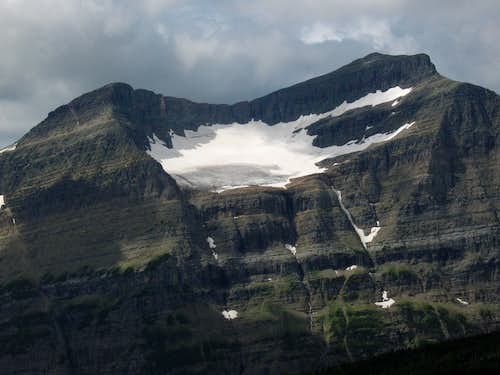 Views from the pass area, which can be extremely windy, are beyond spectacular. Many of the big peaks around St. Mary Lake are visible to the south, a wild and trailless valley stretches to the east, the bulk of Mount Siyeh dominates the northern view, and, directly west and very close, is the best view of them all-- Going-to-the-Sun Mountain and Matahpi Peak, with heavily crevassed Sexton Glacier beneath them. 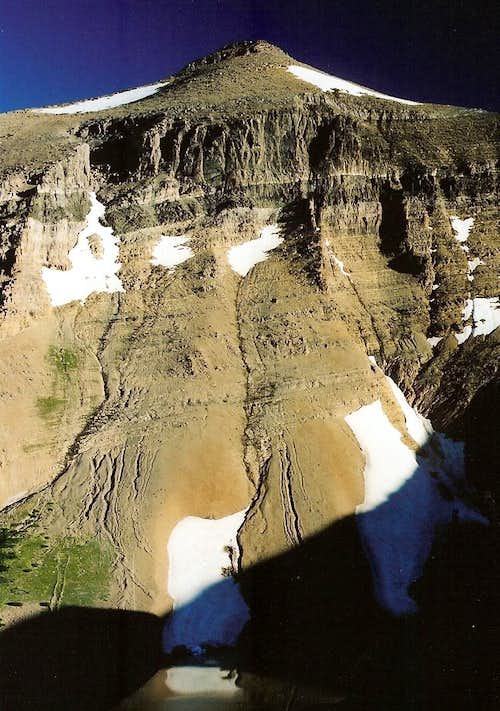 The route to the summit follows the ridge and climbs almost 500'. Measuring with a compass suggests the distance is about half a mile; I didn't bother to make a GPS track for this one. 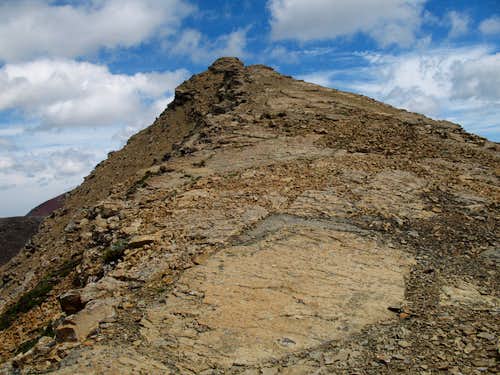 The north side of the ridge is seriously exposed, and a slip will likely mean no second chances. Walking along the top of the ridge is a thrilling experience, especially when it is windy; in a few places, you have to step or leap across short stretches of nothing, and there are some interesting pinnacles and scrambling sections along the way. Unfortunately, it is difficult to follow the ridgetop all the way because there are times when you reach a short face that is nevertheless too high and sheer to downclimb safely, especially considering the exposure. But staying atop the ridge as much as possible will throw some Class 3 at you and heighten the fun. 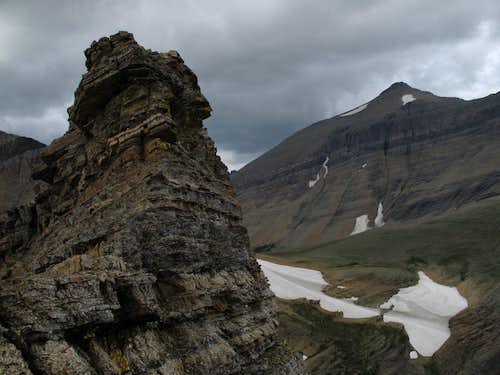 If you prefer not to mess with the exposure, you can stay on the right (south) side of the ridge and make it a Class 2 hike all the way to the top. 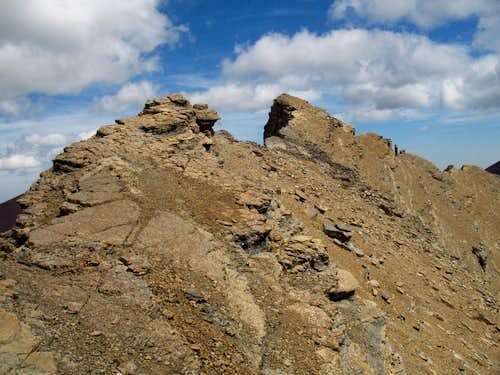 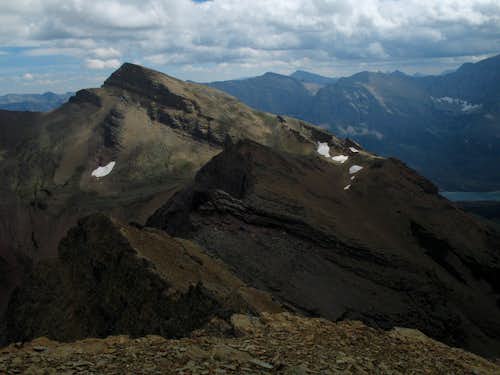 You can go back the way you came, or, if your party has already started down the trail, you can carefully work your way down the south face to the trail. The going is mostly on steep, loose scree, but there is occasional scrambling as you negotiate small cliff bands.

Now it's time to lick those chops and savor the dessert. You have about 5.5 miles to go, losing about 3450' of elevation. With a 20-lb kid in a pack on my pack, plus assorted supplies, I did this stretch in 90 minutes. 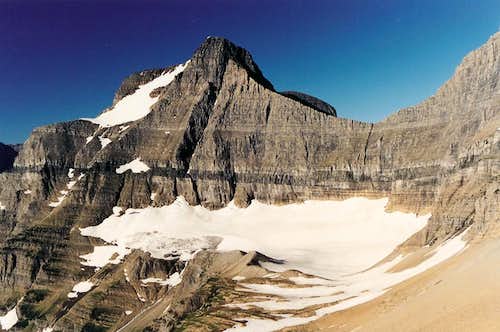 But as you cruise, enjoy the scenery. Almost all of this trail is above timberline or on open slopes that afford panoramic views. For more than half of the way, you still feel as though you are among the mountaintops because of the views of Going-to-the-Sun Mountain and Sexton Glacier (pay attention for an unmarked trail that approaches the glacier itself). Directly ahead of you to the south, massive Little Chief Mountain competes for your attention. And just when the terrain begins to lose its alpine character, you follow a gorge replete with cascades and red walls. This is not Sunrift Gorge, but it is a wilder, less-crowded version of it. 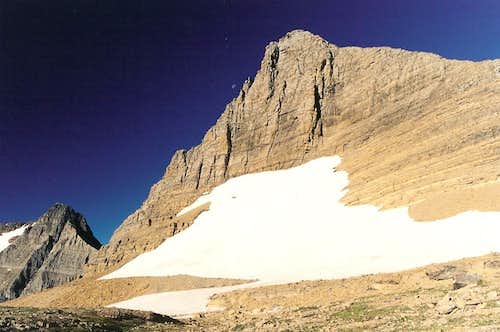 At last, you reach Sunrift Gorge and, very likely, the hordes. The gorge is truly spectacular, as Baring Creek rushes through a dark, narrow canyon. Don't let the crowds wreck it; just gaze up the gorge and reflect upon how it is the gateway to a wonderland that most of the people brushing against you will never see.

Under normal conditions, you just need enough food and water to last 5-6 hours.

The area around Siyeh Pass, especially to its south, is marked as one of the "snow hazard" areas in the park. This means that in June and into July, having an ice axe and perhaps crampons as well is in order. It is advisable to go to the closest ranger station and find out about current conditions before you set out at those times of the year.

This is grizzly country. Rules are different. If you don't know them, do yourself and the bears a favor by staying in your car or hiking the tourist-clogged trails that originate at Logan Pass.

The wind may be a powerful force. Mountaineers are no strangers to strong winds, but it bears mention that the winds on the east side of Glacier National Park are almost always blowing and frequently approach gale-force intensity. In Glacier, it is the norm, not the exception, to encounter strong winds. Near Siyeh Pass, I have faced winds that did all of the following: brought me almost to a standstill, nearly knocked me over as I was carrying a large backpack, and sent a loaded pack tumbling toward the edge of a cliff.

There is no good way to tell at the trailhead just what the winds will be like up high, so make sure you have a jacket and are ready for powerful gusts. And if strong winds are not to your liking, consider doing this route another day if there is a stiff breeze at the trailhead.