Skalnik is the highest mountain in the Rudawy Janowickie range. It is a broad, forested massif with two peaks, which – according to a little research carried out recently by Patryk Charydczak – have almost identical elevations of 944 or 945 metres. It turns out that the southwestern peak is nearly ten metres higher than commonly thought and what you see on hiking maps of today. The error must have stemmed from the fact that the elevation of the benchmark stone that sits some fifty metres from the highest rock on the SW peak (936m) was once ascribed to the top of the rock, whose elevation on a 1:25,000 German map made in 1939 is 945.1m. According to measurements made by Mr Charydczak himself as well as new data from the Head Office of Geodesy and Cartography (GUGiK), the SW peak is actually a few dozen centimetres higher than the NE peak which has been regarded as the main summit for decades. The SW peak, whose highest rock is unofficially called Ostra Mała, is much more attractive than the NE one, so if it really is the actual highpoint of the whole masssif, this would be the icing on the cake.

Given the unimpressive elevation of Skalnik, its mundane shape and dense forest cover, it would seem that it is not worth hiking, and I must admit I had tended to think so until I turned sixty. Then, while on a two-day mini-trek in the east of the Western Sudetes, one summer evening I reached what is regarded as Skalnik’s SW summit and known as Ostra Mała or Mała Ostra (meaning the Little Sharp) at 935m. It is the highest rock within the summit area of the SW peak - a literal summit block, which gives spectacular views, including a panorama of the nearby Karkonosze, i.e. the Giant Mountains, formed of the same granite as Skalnik, but several hundred metres higher. Towards the end of the 19th century Riesengebirgsverein built a stairway to the top of the rock and secured this natural viewing platform with a railing. I climbed the stone steps, watched the sunset and then the sunrise and I was pleased with the views and the place. In fact the name of the mountain comes from these rocks (‘skała’ means ‘rock’ in Polish). It seems that in the 19th century the mountain remained unnamed. (My guess is that it was called the same as the ridge it is the highest part of, i.e. then the Landeshuter Kamm – today the Rudawy Janowickie Mountains.) But several interesting rocks scattered on its SW peak did have a name – they were called the Friesensteine, which translates as the Stones of the Frisians. Later on the highest of those rocks (today’s Ostra Mała) was named Freie Koppe. 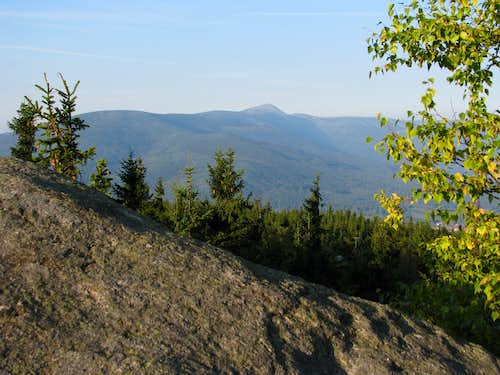 Śnieżka and the Giant Mountains seen from Ostra Mała 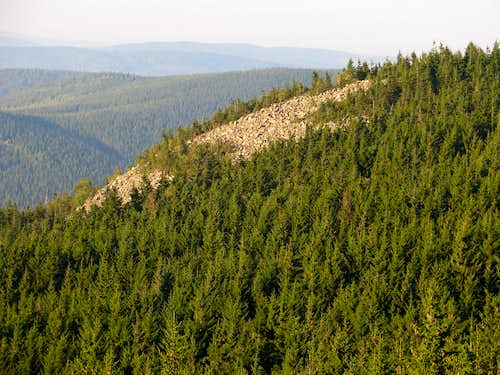 Unlike the SW peak, the NE peak has no rock formations on its top, which is so flat that it is difficult to tell whereabouts its highest point is located. 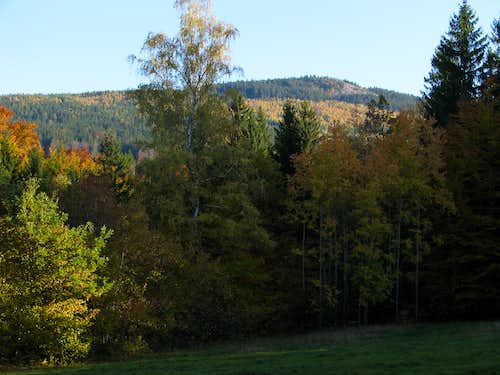 The NE peak with its talus field seen from NNW

An off-trail attraction for those looking for something wilder and rougher is a talus field that lies about 300m northwest of the main summit, covering a few acres of the uppermost part of the slope of Skalnik. It is a quite unique phenomenon in this area. The nearby Giant Mountains have many more talus fields, but all of them lie above the tree line, which runs at about 1250m there. The first time I tried to get to Skalnik’s blockfield from the NE summit I had decided to make a long detour and follow a path, marked on my map, that appeared to cut down bushwhacking. It didn’t work well as the path vanished quickly, I did have to bushwhack a while and was actually on the verge of giving up when I found myself on the edge of the blockfield. There I discovered yellow marks on tree trunks, which I guessed led to the main summit, so on my way back I eagerly followed them to avoid a bushwhack back. In a few minutes, thanks to those unofficial marks, I got to the main summit indeed.

Skalnik is readily accessible from several villages or towns around it. The nearest town is Kowary. It lies just a few kilometres west of the summits of Skalnik, about 17km southeast of the city of Jelenia Góra, with which it is connected by Road 367. Buses/minibuses from Jelenia Góra to the nearby resort town of Karpacz run through Kowary. Jelenia Góra has good train and bus links with Wrocław, the capital of Lower Silesia. There is also a direct bus service between Wrocław and Kowary.

If you set off in the centre of Kowary, your elevation gain on reaching the summits will be less than 500m. If you park your car at the pass past the northeast fringe of Kowary, known as Przełęcz pod Średnicą, the elevation gain will be less than 350m (and the distance less than 4km). If you feel like a little challenge (some mud, track getting overgrown in places), you can start walking at the village of Strużnica, north of the summit, and follow the trail blazed by the Scouts from their campground south of Strużnica to the official waymarked trail linking Przełęcz pod Średnicą and Ostra Mała.

The shortest routes lead to the top of Skalnik from the east, from the village of Czarnów. If you park your car on its outskirts, you will walk less than 2km to Ostra Mała. The longest route pretty often taken has its start point at the railway station in Janowice Wielkie, approximately 12km north of Skalnik. It is fairly interesting near the start, with ruins of an old castle and a bunch of rock formations, but most of it is rather mundane following monotonous forest tracks. This route has a total elevation gain of 700m. 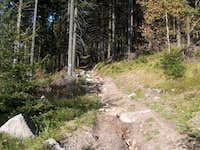 If I were asked to recommend a route, I would suggest getting to the old stone bench located on the trail linking Przełęcz pod Średnicą and Ostra Mała (please see next chapter) along a route of your own choice, then taking the unmarked track that branches off east at the bench. The track forks after a hundred metres – follow the right-hand branch, you will see the monument to the prince and his wife (see next chapter) on your right. The track will end, getting completely overgrown by trees, after some 1,200m. Turn upslope there, following faint paths or bushwhacking through the wood growing on what used to be talus, to get to the foot of today’s talus field a few dozen metres up. Climb up the blockfield, split in two halves by a tiny grove. Weather permitting, you will have good views, not worse than those from the summit of Ostra Mała. Just past the very top of the blockfield, on some of the trees on the edge of the spruce forest you will spot the unofficial yellow marks described above in the chapter about the NE peak. Walk through the spruce woodland for over 300 metres to get to the official waymarked trail right at Skalnik’s northeast summit. From there it is about 600 metres’ walk to the trail intersection with the monument to the scoutmaster (see next chapter). Follow the red triangles and soon you will be able to have a rest and take in the views sitting on the bench on the top of the southwest summit of Skalnik also known as Ostra Mała. The whole circuit stone bench-talus field-NE summit-SW summit-stone bench is less than 3.5km long and should take you about 1.5 hours.

The area between Przełęcz pod Średnicą and Ostra Mała is dotted with engravings, most of which are signposts commissioned by Prince Heinrich XXX of Reuss and placed in the woods he owned before World War II. On the red trail between Przełęcz pod Średnicą and Ostra Mała is a stone bench made in 1926. (Next to the bench is a new wooden shelter.) Just around the corner, by an unmarked track running towards the lower end of Skalnik's talus field stands a monument to the prince and his wife Feodora. At the trail intersection 150m SW of Ostra Mała is a monument from the 2010s - to Scoutmaster Janusz Boissé, who for many years took his scouts to camp in the area. 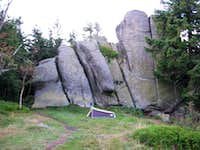 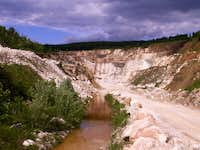 When To Climb & Mountain Conditions