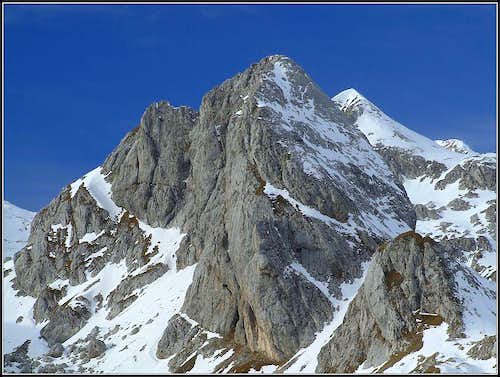 From the east
Even if Bohinj Group peaks are quite high, rugged and rocky, most of them look rounded from a distance. But Skednjovec is different. It is a sharp ridge mountain, rising from the most remote part of the high plateau, above Miseljska dolina. Towards the north Skednjovec has a short, but almost vertical wall, appropriate also for harder climbs, and also towards the south it shows a characteristic white south wall, which distinguishes it from the other summits, when we look at them from the lower Bohinj meadows. Even to both starts of its sharp ridges no path leads, to reach the saddle where its easiest, western ridge starts, you need quite some orientation skills. Or, at least a clear day with good visibility. The route over the western ridge is an easy climb of UIAA I, the route over the eastern ridge is even little harder (UIAA II. degree).

What sounds most beautifully on Skednjovec, is it remoteness. The tour on its summit will lead you through a wild high karst world, you probably won't meet a soul on that day. Also the access route can't be more beautiful. Krstenica is one of the most beautiful alpine meadows in Julian Alps. And the lower part of Dolina za Debelim vrhom (valley) is also a high mountain pearl. If you are skilled enough, you can do a crossing - ascend by the East ridge and descend by the West ridge. And on a return, if you have time and energy, you can add a summit in the neighbourhood. Great would be, for example, a tour, where on the return you would cross also Debeli vrh.

The NE side
The summit view is not that broad, but beautiful enough. On the north a little higher Miseljski greben (crest) obscures the view, but the summit of Triglav is seen above it. Also towards the south Debeli vrh is a little higher, and also the summits above Hribarice plateau on the west are higher than Skednjovec. Still the view on the shattered karst world north of Debeli vrh is impressive. Only towards the east panorama from Skednjovec is free.

Otherwise the name Skednjovec stems from the word 'skedenj' = 'barn'. 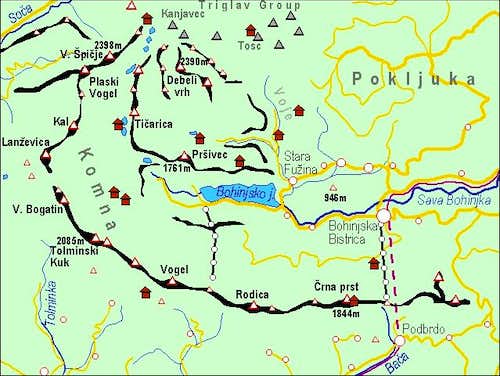 Bohinj Group
For a broader overview, see the Julian Alps page and the Bohinj Group page!

In Bohinj valley we arrive by car, bus or train from Bled (by train also from Gorizia).

From the main Bohinj valley (Stara Fuzina village) we can drive by car towards north into Voje valley. After 2 km there's a crossroad, where we take the left forrest road. It takes us through Suha valley to Planina Blato (alpine pasture), 1147m. There's a big parking place. In summer, the road through Suha valley needs to be paid.

The marked paths, by which the majority of visitors of Triglav kingdom is travelling, are far away from Skednjovec summit. They come closest to it on Hribarice plateau, from which the saddle below the West ridge can be reached in an hour (no path, we go over the summit, named Vrh Hribaric, 2388m).

The second option how to reach the saddle below the West ridge is from Miseljska planina (alpine meadow) or from Vodnikov dom (hut) on Velo polje. We enter Miseljska dolina (valley), ascend through it (a weak path, not marked), and where the valley closes, we turn left and ascend over screes to the saddle. At least 2h 30min from Vodnikov dom.

The third option how to reach the saddle below the West ridge, is from the south, from Krstenica alpine meadow. This one can be reached from the parking place on Blato meadow, 1150m, in 1h 30min. From Krstenica we continue by a marked path towards the north in the lower part of Dolina za Debelim vrhom (valley). We reach Jezerce meadow and Miseljski preval (saddle), from where we continue around the south face of Skednjovec on the saddle below the West ridge. See more in the route description!

All the above three access routes attempted the saddle below the West ridge of Skednjovec. If we want to climb the East ridge, we start the climb above Miseljski preval (saddle). It can be reached by a marked path, which connects Vodnikov dom (hut) and Laz alpine meadow, or, as described above, by the marked path from Krstenica meadow. 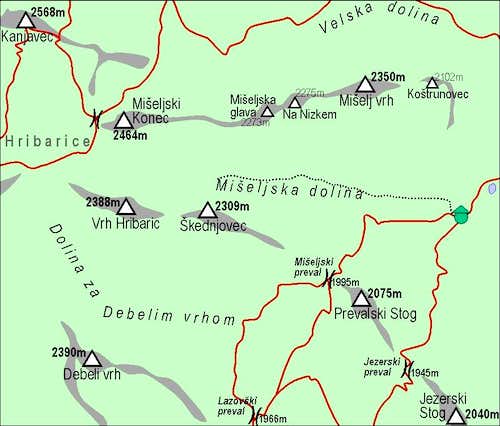 Skednjovec and its surroundings
1. West Ridge Route. See above (Getting There section) how to reach the saddle below the West ridge! From Blato parking place (the best option for a one-day tour) we need up there some 4 hours, from Vodnikov dom some 2h 30min. From the saddle we follow the West ridge to the top. It is an easy, but exposed, 30 minutes climb of degree UIAA I.

2. East Ridge Route. We can reach Miseljski preval (saddle) in some 3 hours from Blato parking place (the best option for a one-day tour). From Vodnikov dom we need 1h 30 minutes. From the saddle we ascend towards the NW, keeping a bit right of the main ridge. This is a hardly passable karst terrain, full of chasms and rocky blocks. After a detour of the first bump we reach a small saddle below the first steep rocky passage. Above it we scramble up till the face divides into two steep ravines. The left one is a bit easier. In a solid rock we climb some 50 meters (UIAA II), reach the East ridge and climb it to the top. The ridge is exposed, rock is quite fragile and we still need to climb UIAA I degree.

The mountain is in the Triglav National Parc.

In summer, for the road from Voje valley trough Suha valley up to Blato alpine pasture you should pay toll. 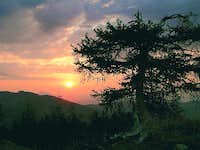 Evening on Krstenica
The nearest huts are:

Official camping place is in Bohinj valley - here is the link to the tourist web site.

South of Skednjovec
In summer and autumn - the best months are July to October. In best conditions the karst world south of Hribarice is appropriate for tour skiing. Actually, great ski tours go around the neighbouring Debeli vrh. But the world close to Skednjovec is more rugged. The best months for ski tours are March to May. Of course, from the West saddle to the top we need to go without skis.