Amy, PJ, Sarah, and I decided on a late spring backcountry ski trip to the southern reaches of Williams Lake Basin in the Wheeler Peak Wilderness of the NM Sangre de Cristo Mountains. We ran into Kerry of Albuquerque in the parking lot, and he joined us for the day. We skinned up the Williams Lake trail and headed SW through the trees at the rise just north of the lake. Our first objective of the day was to ski a prominent NE facing couloir below an unnamed point on the ridgeline between Lake Fork Peak (12881', tied for 5th highest ranked peak in NM) and UN 12819 (9th highest ranked peak in NM). UN 12819 is also known as Sin Nombre (No Name) among some of the locals. Then we headed for the NW slope of UN 12819 and skied it twice, before heading back out for cold beer waiting in the car. Our total roundtrip distance was ~7 miles with a total elevation climbed of ~4000'. Our total car-to-car time was ~6.5 hours.

To get to the hikers' parking area (~10160'), take NM State Route 150 to the Taos Ski Valley parking area. From the NE corner of the parking area, find and take Twining Rd (dirt road) for about 2 miles to the hikers' parking lot which will be on the right side of the road after some switchbacks. This dirt road gets fairly steep, but normal passenger cars will be OK as long as the road is snow/ice free. From the parking lot, follow a well-beaten path heading S from the SW corner of the parking lot. Shortly you will pass the Bavarian Restaurant (good German beers/grub although they are generally closed from early April through late May) and come to the bottom of a ski lift (Kachina Lift, #4). In early/mid spring, this is generally where you can start skinning. Even though it was late May, we were still able to skin from the bottom of the Kachina lift. Head up the slope (past the lodge) and turn left at a small shack called Black Diamond Espresso (too bad it's only open when the lifts are running). This is the start of the Williams Lake Trail. This is a well-traveled trail all four seasons, so generally it is easy to follow even with snow.

We followed the Williams Lake trail for about 2 miles to a rise (~11120') just north of Williams Lake. You will pass several avalanche runout zones in the first mile. 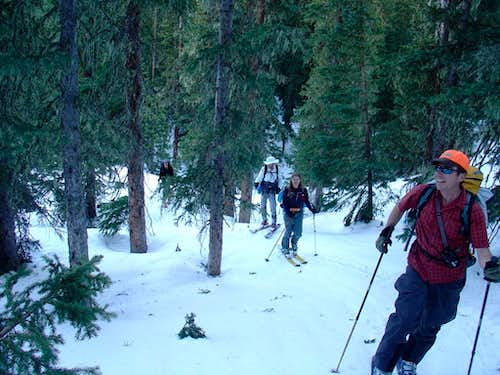 The gang skinning up the Williams Lake trail.

At the top of the rise, we headed SW into the forest. Going down to the lake is not necessary. Maintaining a SW course through the forest, we came out into a big clearing and could see our objectives. 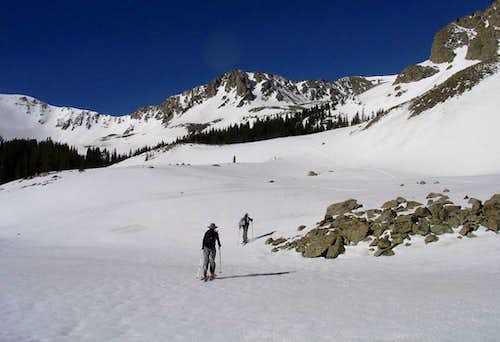 Amy and Sarah skinning after leaving the trees. 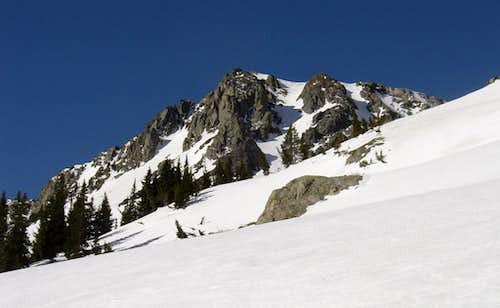 Our first objective: a sweet NE facing couloir. Anyone know if it has a name, other than "Ohio"? 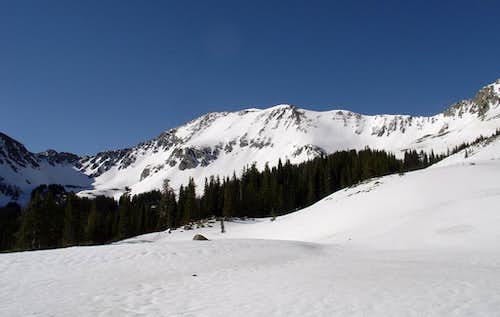 We kept skinning toward the couloir. 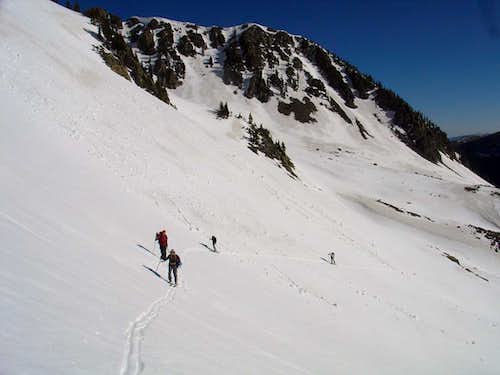 The gang negotiating some tricky side-hilling.

When we got to the base of the couloir, we put the skis on our packs and started climbing. The snow in the couloir was in fine shape for bootpacking. 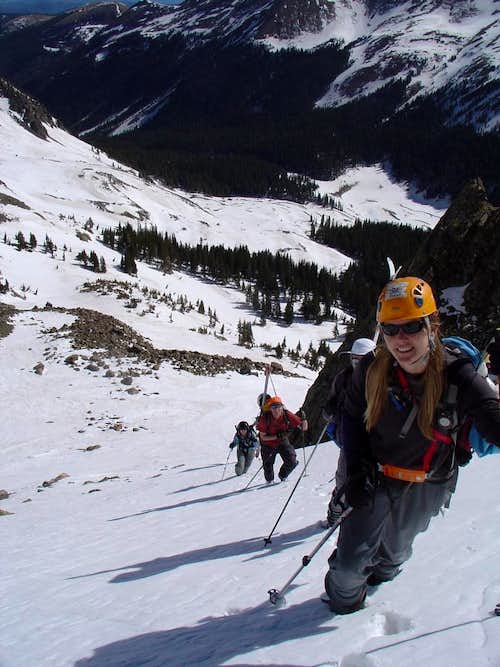 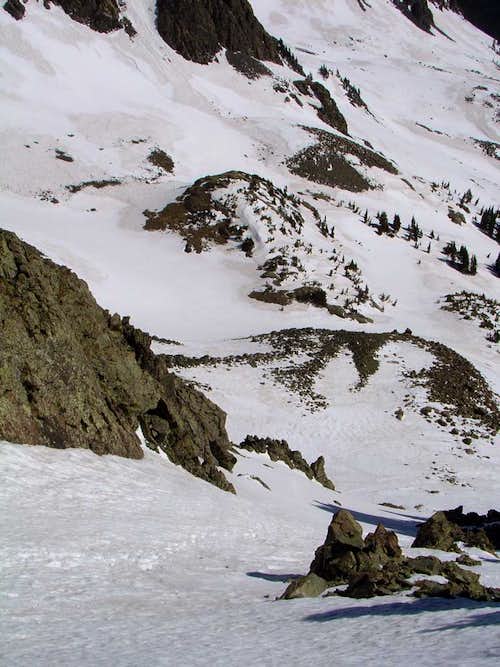 Looking down the couloir.

At the top of the couloir (~12560'), there were nice views of the SE slopes of Lake Fork Peak and the entire Williams Lake Basin. We quickly put our skis on! 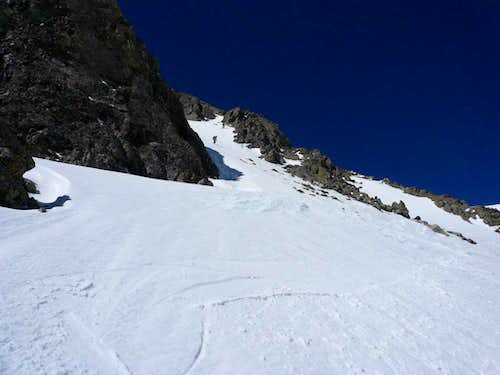 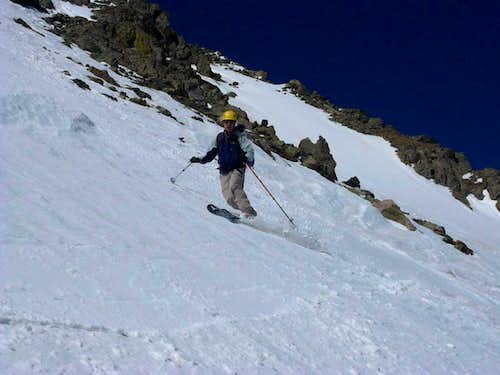 Scott near the bottom of the couloir.

From the bottom of the couloir, we contoured around to the southeast without dropping too low, probably staying above ~11800'. When we got to the bottom of the NW facing slope of UN 12819, we strapped the skis to our packs and started bootpacking. 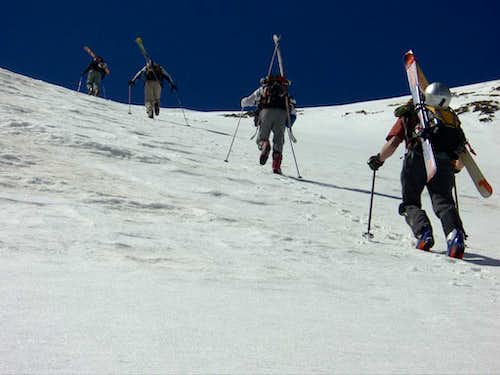 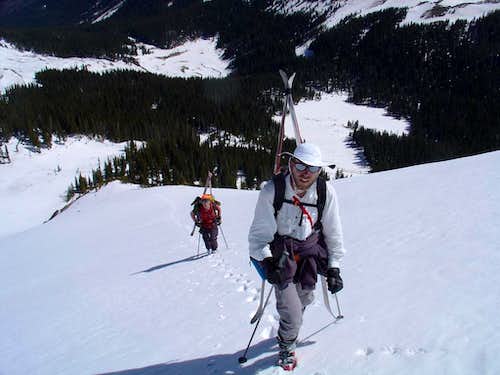 Looking down the slope at PJ and Kerry.

We reached the ridge at the top of the slope and had a snack, enjoying the views. We did not go to the true summit of UN 12819, which was still a short distance to the east and maybe another ~150' higher. (Amy and I had summited UN 12819 in the past on a summer scramble from Lake Fork Peak to Wheeler Peak.) The weather was great and the snow could still stand to soften a touch, so we took our time digging a pit for a Rutschblock test. 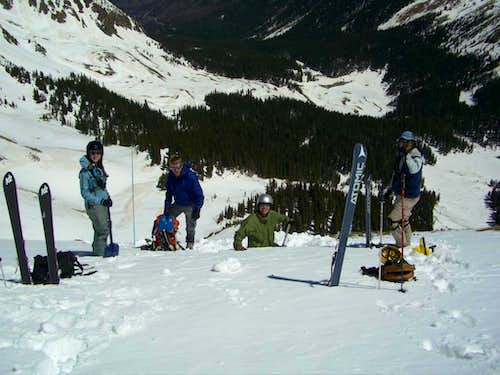 Digging a pit to do a Rutschblock test.

As expected, the snow was consolidated and ultra-stable. We started skiing. 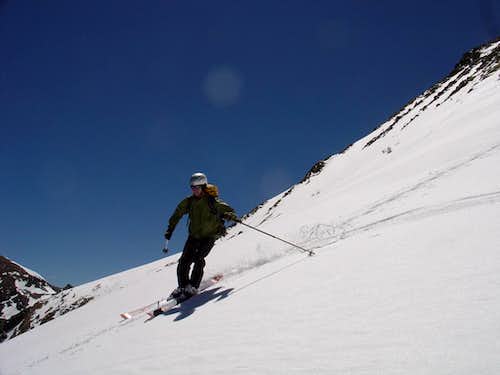 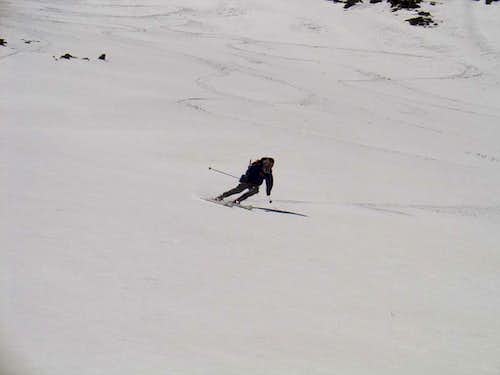 PJ ripping it up.

It was so fun we decided to bootpack up again to ski this slope again. 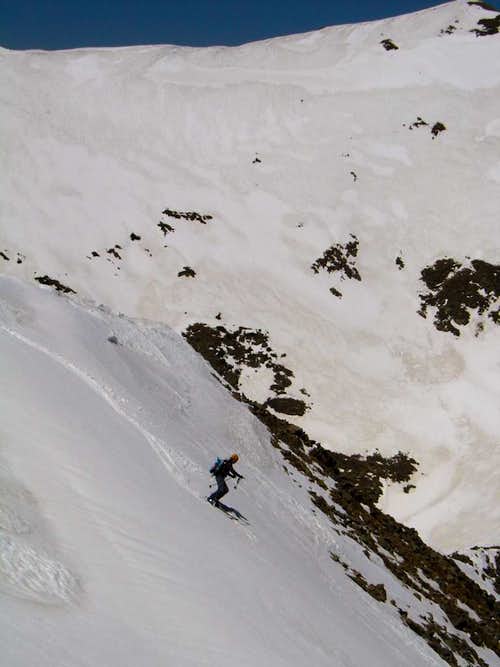 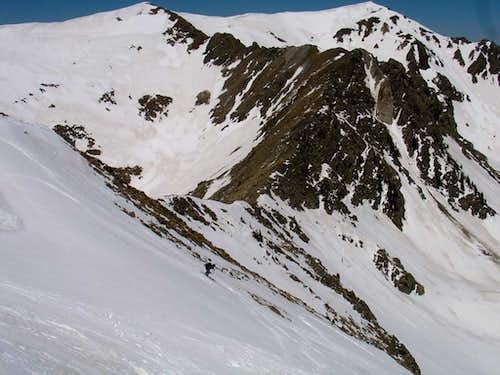 Sarah on the NW slope of UN 12819, with Lake Fork Peak in the background. 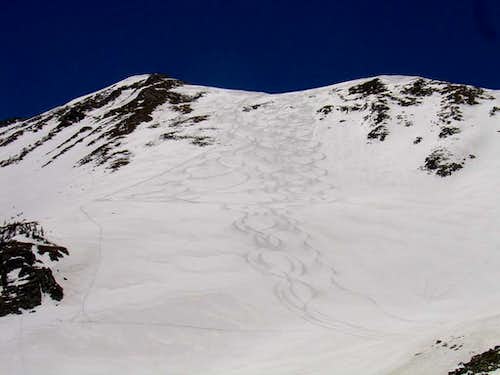 That was hard work.

There were still a lot of fun turns heading down toward Williams Lake, following an avalanche runout path. The snow got a little slushy down lower, becoming the typical slog out on a warm spring day. But no matter, cold beer was waiting in the car. 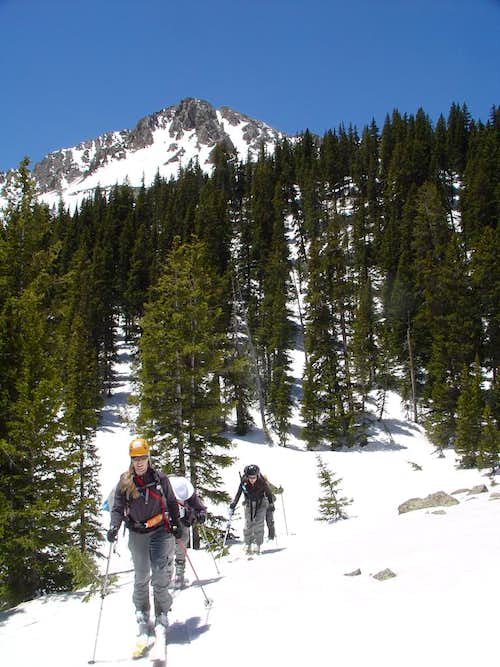 Heading out for cold beer.

There are tons of lines to explore/ski in the southern reaches of Williams Lake Basin. The first couloir we did is fairly steep, with a sustained section of 45 degrees or slightly steeper at the top. If the snow is firm, an ice axe and possibly crampons are recommended. The snow was fairly soft on this day, so we didn't really need them. The NW slope of UN 12819 is not as steep and is much wider, making for a fun mellow ski descent. As always, shovel/beacon/probe and knowledge of their use are essential.

The NE slope of UN 12819 also offers some good ski lines, being wide open at the top and then dropping through some narrow chutes past a cliff band about halfway down (see 4th photo above). There are many gems back in the Williams Lake Basin!

MAYBE SOMEDAY that will be me...

Thanks for the comment and vote! Although carrying skis on your back gets heavy sometimes, snow actually makes everything much more pleasant IMHO. And the downhill usually takes <1 hour even for very long routes!!

Thanks for writing this up! What a memorable day!

Thanks for your comment/vote! I agree, bc-skiing is hard to beat.

This is a great trip report! Believe me, I don't need any other reasons to be dreaming for the ski season for you went and gave me one. I'm prayin' for snow followed by a lengthy spring and summer snowpack.

Thanks! Yup, it's that time of year when the ski gear comes back out and stays in the living room until next summer :-)

Comes back out?? We never put it away!!

Hmmm, even though this looks great, it is the worst area ever!! Never good snow, always crowded. No that's not me smiling in those photos.