Ski tour by the valley Za Cmirom is a late spring tour. It has two basic purposes. The first one is to do a one-day ski tour on one of the summits near the Stanič hut and the second one is to do the ascent to the Stanič hut or Kredarica, sleep there and then ski down into one of the other valleys (preferably Krma or perhaps Kot). The valley has two steep valley-steps and the ascent on Begunjski vrh, 2461 m, can be dangerous.

Difficulty. Medium hard ski tour. Steep sections in the valley, dangerous crossing of the slopes just below the summit of Begunjski vrh.

Objective dangers. Big exposure to the avalanches in the valley Za Cmirom.

Best months. March to May.

Slopes orientation. North in the valley Za Cmirom, south and west on the ascent/ski tour on Begunjski vrh.

The trailhead starts in the Vrata valley, on Turkov rovt (meadow) some 1500 m before the end parking place at Aljažev dom (hut) - on 940 m of altitude. In late spring this place can be already reached by car, if not, from Mojstrana village you have a 2 hours additional walk. 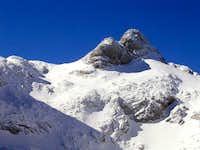 From Turkov rovt you cross the Triglavska Bistrica creek. On the other side you will find a path which is not marked. You gain some altitude through the woods, proceed in southeastern direction and after good 30 minutes reach open terrain at the bottom of The valley behind Cmir (Za Cmirom). Altitude: cca 1200 m.

Now the direction of ascent slowly turns more and more towards the south. There is no more path, but you can ascend on skis through passages in pine trees. Reaching the foothills of Cmir (2393 m) or, actually of its NE foresummit Nad Kuhinjo špica (2266 m), the ascent gets steeper. In many switchbacks you overcome a slope and above it the right couloir. In bad conditions there can be an avalanche danger. Above the couloir the slope flattens and you cross a small plateau (Za Cmirom). South of it very wild and picturesque ridge of Spodnja and Zgornja Vrbanova špica rises. You proceed towards the SW and ascend on a broad saddle (Begunjska vratca, 2341 m), east of Begunjski vrh (2461 m). Stanič hut is a few minutes to the left (in the SE direction). 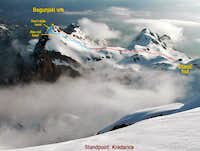 From this pass Begunjski vrh can be reached and if you are a good skier, you can also ski from its summit. But this is a very exposed endeavour. First two or three turns are just above a 300 m high vertical wall (see the right picture). So - no slippage, no fall!

To Kredarica hut you proceed from Begunjska vratca pass towards the south and later south-west. Broad, not steep slopes are lowering from Rž mountain (2538 m) and Kredarica (2541 m) towards the N and the NW, till the edge of Triglav north wall. You cross these slopes, reach the pass between Kredarica and Mali Triglav (2725 m) and in a few more minutes the hut on Kredarica (2515 m).

You ski down in the same direction (or through any other valley towards the south or east). If you ski behind the Cmir, on the bottom part you may ski either through the left or righ couloir. They are both perfect!