As described on the main page you reach Monte Lussari (preferrably by cable-car from Camporosso). 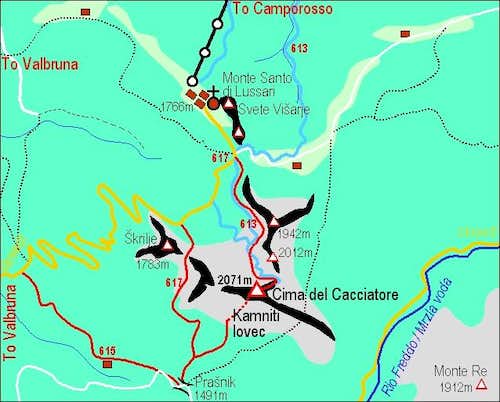 From Monte Lussari (1766 m) you descend a little by the road to the saddle (1715 m) between Monte Lussari and Cima del Cacciatore / Kamniti Lovec. From there, one road goes down in Valbruna valley, the other one towards the left (eastwards) on Malga di Lussari, but you follow the marked path No. 613 straight on towards the south. You gain some altitude through the woods and so you do a west-side detour of the first higher summit in Cima del Cacciatore / Kamniti Lovec N ridge. Reaching the edge in the forrest you descend some 50 meters, and then cross the slopes - allways towards the south. Here the scenery is very beautiful: light larch forests and the rocky ridge above them. You allways see the summit heads of Cima del Cacciatore / Kamniti Lovec in front of you. Approaching the summit, you reach the steep slopes, leading into a nice basin, situated north of the main summit. This basin is called 'V Klobuku'.

When you're in the bottom of the basin you can see on the left the only passage on the North ridge, which is appropriate also for skiing. You cross the slopes from right to left, reach the short but steep couloir (some more than 40 degrees) and through it the North ridge. There you usually leave skis.

The North ridge of Cima del Cacciatore / Kamniti Lovec is at first simple to ascend, but soon you must do a few passages to avoid more difficult rocks. That's why skiing there could not be enjoyable. Over steep rocks (in bad conditions take care!) you ascend the fore-summit and over the next notch the main summit with a cross and a bell. Enjoy the panorama now!

You descend best by the same route. Skiing through the short couloir is not dangerous, after it, it's only a pure joy left. Instead of crossing forests to Monte Lussari, you can also do some more skiing down to the road and by it ascend the convent and the church. No need to say that from Monte Lussari down to Camporosso you have a nice downhill by ordinary ski pistes.

Equipment for tour skiing. Ice axe. If snow is hard or icy, the summit ridge can be hard enough, so take also crampons.