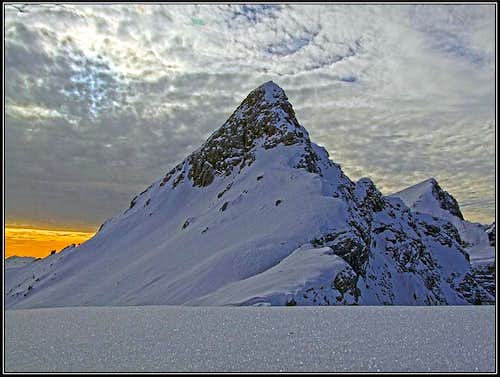 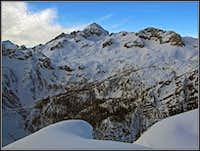 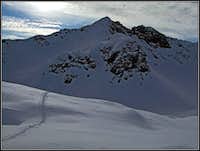 The scenery below Viševnik N face
Point 1979 in an unnamed peak in the main Pokljuka mountain chain, just NE of Mali Draški vrh. In summer, the path which goes from Vodnikov dom to Lipanca huts, crosses its southern slopes, reaching the saddle between Point 1979 and Veliki Selišnik. In winter, the plateau SE of Point 1979 offers a nice ascent possibility, we usually come from Rudno polje (See the main page!).

The ski tour from Point 1979 is one of my favourites above Pokljuka plateau, The reasons are the following:

> You will rarely meet there other people skiing. Everybody ascends Viševnik, some also the neighbouring Debeli vrh, 1962 m.

> From its summit you can enjoy one of the most fascinating vistas in the area. From nowhere Mali Draški vrh looks so beautiful than from Point 1979.

> You can do a nice round tour with a lot of variety - quick ascend towards Viševnik, beautiful last larches on Viševnik E ridge, The plateau below Selišnik, the panoramic summit, great skiing towards the NE and through the woods down on Pokljuka. 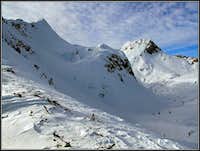 Crossing Viševnik E ridge
The tour is usually easy and enjoying. However, in a very hard snow, some care is needed when crossing the E ridge of Viševnik. In fog, don't dare to cross the plateau between Viševnik and Veliki Selišnik, and in fresh snow some steeper parts can be also dangerous because of avalanches.

Altogether we have some good 650m of skiing down and quite some crossing (the ridge, the plateau). 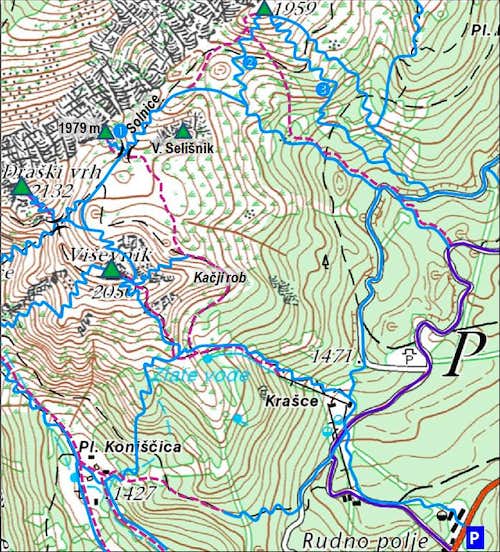 From Rudno polje we continue by a forrest road towards the NW till we reach the two Viševnik ski lifts. Left of them there's usually a track to ascend skinning to the upper station. Then we continue towards the west by a quite steep valley towards Viševnik. Due to this mountain popularity, there are allways footsteps, so consider also carrying skis on shoulder - but just to the nice plateau of Zlata voda. From there, the path on Viševnik continues towards the W, while we deter right, by a shallow valley in the direction of the summit of Viševnik. But soon we start going even more towards the right, in the NE direction, all the time ascending comfortably, crossing the slopes through light larch woods. Just below the E ridge of Viševnik there are the last larches - a beautiful point to stop for a short break.

From the E ridge of Viševnik we need to descend some 30 meters in a basin below the NE face. The passage is broad and comfortable, only in a hard snow, have in mind that there are a few rocks below. So we reached the undulated karst plateau between Viševnik, Mali Draški vrh, Point 1979, Veliki Selišnik and the small rock of Mali Selišnik. For our intentions, there are mainly two options to cross it: Towards the N on the saddle, W of Veliki Selišnik, or more towards the NW, below the N face of Viševnik and then towards the N on Point 1979. Anyway, our goal is all the time in front of us, attracting with a nice S slope. We best ascend the summit by the S slope.


We shall ski down towards the NE, into Solnice basin. Depending on snow conditions we have two options. The S summit slopes are easier (then left around Point 1979 and in the valley), the NE slopes are steeper, but in good conditions (for example powder snow) also very recommendable. You just need to avoid a few steepest parts with rocks. The valley down into Solnice is ideal for skiing, usually best in winter conditions (powder snow). Below, we need to ascend some 20 meters to reach the valley below Debeli vrh (Blejska konta). There we turn right and follow passages towards the SE. From light larch woods we sink more and more into a more dense forrest, but ski passages open everywhere. Below we hit the upper Pokljuka forrest road, where we turn right and follow it back on Rudno polje.