Going along with the theme of the Olympic games, I visit the Lake of the Angels basin in the Olympic Mountains every four years for some peak bagging.  Or at least that's how it's worked out so far.  I had a failed attempt at Stone in '08, a successful summit of Stone in '12, and in 2016 I decided to go back for Skokomish!

It was supposed to be a hot day (upper 90s) so I left early, wanting to get to the trailhead around sunrise.  As I got near Hoodsport the dawn colors were really coming out.  I paid so much attention to the sunrise that I drove 15 minutes past the Hamma Hamma turn off before I realized it!  That set me back a bit but I was on the trail by 6:00 am.

Hoodsport Sunrise
I must have forgotten how steep the Putvin trail is, but I was reminded pretty quick.  That Putvin trail doesn't mess around!  I managed to find a good pace and with a few photography breaks I reached the first basin.  Snow started soon after the pond of false prophets and it was mostly snow travel from then on.  Upon reaching Lake of the Angels I could see several groups camping on what little dry ground there was.  The lake is just starting to melt out and a good deal of it is still under snow. 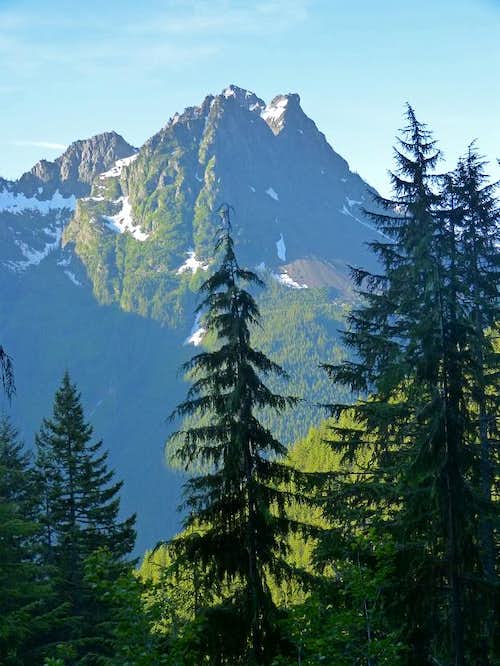 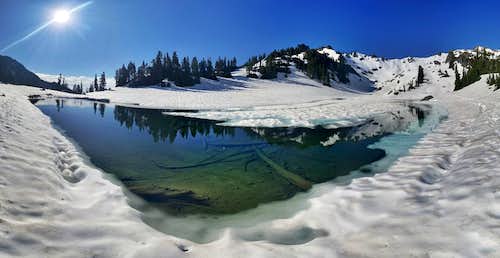 Lake of the Angels
Looking west from the lake, there are two gullies leading up to the saddle at 5700 feet.  I took north gully (climbers right) and made my way up.  The snow was soft, perfect for kicking steps.  Part way I noticed a mountain goat and kid high on the ridge.  As I made my way up, they made their way down.  I always love seeing mountain goats, they feel like kindred spirits or something.  A short while later I reached the saddle at 5700 feet and could see the final destination of Mount Skokomish!  Mount Cruiser came into view and looked particularly impressive from this vantage point. 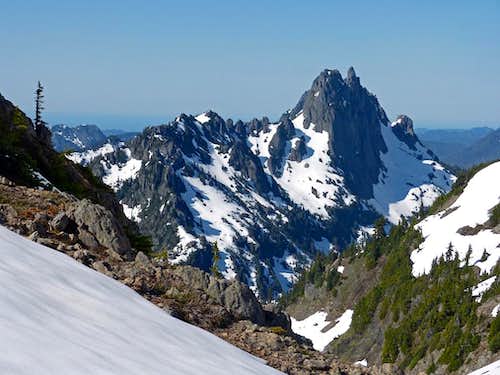 Looking Back at Stone on the ridge between the two gullies

Point 5945 from Skokomish Traverse
From here the route traverses across the south east face until you are E / SE of the summit (just above the 'h' in Skokomish on the topo) before heading up.  I feel like I timed this trip perfectly.  This portion of the route is renowned for loose chossy rock.  Fortunately for me most of it was still covered by snow, soft easily kickable snow at that!  At this point I pulled out my ice axe which I was glad I brought.  My microspikes stayed in my pack.  Had the snow been firm or icy crampons would have been preferable.  The traverse was pretty uneventful and a short while later I found myself on the summit of Mount Skokomish!

The views were some of the best I've seen in the Olympic range.  I spent about 40 minutes on top having lunch and soaking in the views before heading back.  The way down included copious amounts of standing glissading and soft plunge stepping.  It was heavenly!  The rest of the way back went smoothly and I made it back at 1:40.