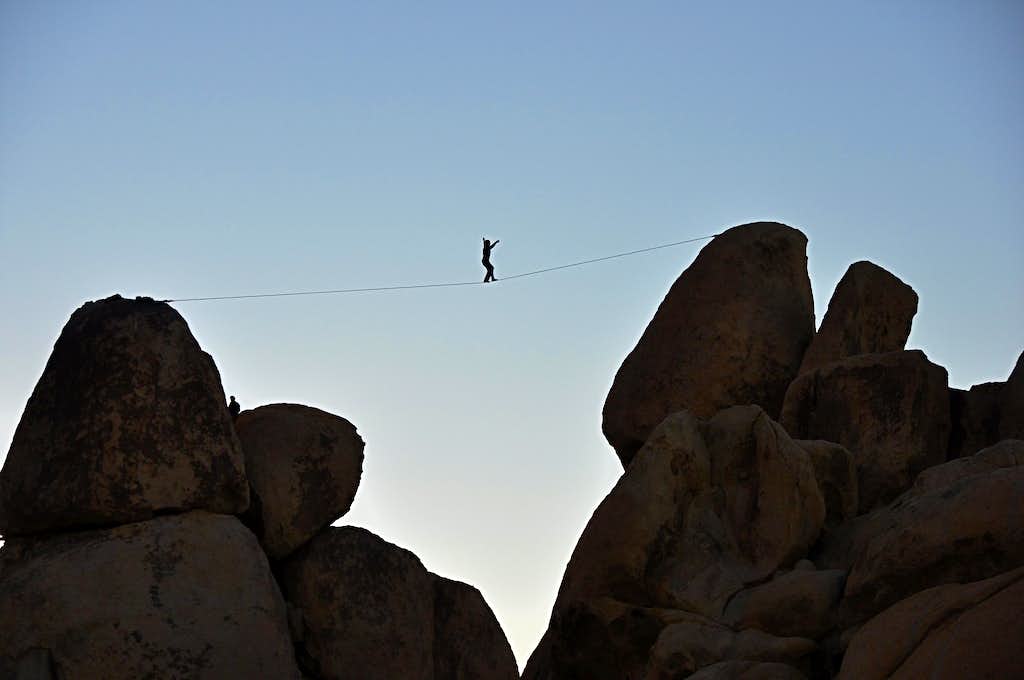 Joshua Tree National Park on a cold and windy afternoon in December of 2010. It's not me guys, It's an unknown climber and using a safety leash would have been a good idea Short History: The very first time I saw something like this was in 1970, in Yosemite's Camp 4/ climbers campground. It consisted of a chain, 30 feet long, hung between two trees about 3 feet off the ground. Jim Bridwell , a Yosemite icon, and his buddies used to walk on it as the chain swung left and right like crazy. Everytime my buddies and I went there, we tried it too. At least a decade later, the chain had turned into a one-inch-wide nylon webbing stretched between two trees. It was now called "Slackline." Then, people started to increase the hight, 10 feet, 20 feet,... hung between two rock formations. The latest, as far as I know: A famous Yosemite climber, D.P. without any safety measure, has walked the slackline stretched between Lost Arrow Spire and Upper Yosemite Falls Wall.
« PREV NEXT »

Nice shot Marc, but what's this all about?

Re: Some more Info?

Hi Troy, First of all, this is not me. It's an unknown climber.
Slacklining is walking on a one-inch wide webbing hung between two points. I'll add some history to the caption.
Thank you for checking it out.
:-)

and very special shot! Really a great shot! Thanks for sharing such special shot with us.
Best regards, Afzal

Thank you very much, Afzal. I feel lucky to be in this area to see this guy and his friends set up the system and walk on the slackline.
Best Regards,
Marc

Hi Mark. I'll explain about my "Ladis (Tirol, Austria) Wanderpass" if you explain what's going on in this shot! Deal? :) :)

Thank you very much for adding the explanation to your "Ladis" photo. I'm going to do the same for this photo.
Give a me a bit of time to do it. Thanks, :-)

Hi Roxy, You would be glad to know that it's not me walking the slackline. I am too old and wise for this kind of thing.
I've added an explanation to the caption.
:-)

Mark, normally they wear a harness with a short line for falls in situations such as your photo here, but I can't see any protection. Did you notice if he/she was wearing a harness? Great Photo as usual!

There were five or six guys doing this and they all used safety leashes except for this guy. I took about ninety photos of the set up and the walk. I'll post a few of the photos at a later date.
BTW, I see you've gone back to your original name.
Thanks for the compliment,
Marc

I think this could be

Re: I think this could be

Windsor, If you read the last sentence in my caption, you will see that I know a thing or two about Dean Potter. This could be him, but I doubt it. Dean Potter is very tall, this guy wasn't that tall. There were tall guys in the group that walked with a safety leash. I took 90 photos of the whole process and the different guys that walked. I'll post a few more pix in the future.

Thank you, Eric. I may be old, but I haven't lost my mind yet.
I am planning to be around for a while longer.
:-) Marc

Thank you very much, advlov. I was lucky to be there when this guy walked on the slackline.
Cheers,
:-)

If you zoom in

on the guy, (s)he's got some kind of surrounding halo - or are my eyes deceiving me?

Re: If you zoom in

No, your eyes aren't deceiving you. He is an angel from heaven.
I think the backlight may have caused the light effect, or that he may really be from heaven.

Hi Marc, we were there that night too! We were driving by and pulled over to snap a few photos but just caught the tail end of a female walking it. It was cool to watch though. Great shot! The lighting was perfect for that shot.

That was pretty crazy seeing that one guy walk without a safety leash, especially since it was windy . I guess we must have left before the girl walked. She must have joined them later because I saw them set up and everything and there were no girls with them then.