Slemenova spica is also called Sleme. So from here forward it will be named Sleme.
Sleme is one of the most beautiful places for breathtaking views in the Slovenia and it leads in the nearness of the famous north face of Mala Mojstrovka. Sleme has two totally different sides. One side is nice and it is very romantic and has a lot of visits. The other side (north face) is dark, very steep and falls to the valley called Tamar. Tamar is the main starting point for ascent on Jalovec which is one of the most popular mountain in Slovenia and it is from Sleme very nice visible and all the famous photos of Jalovec are photoed from here.

Sleme is in fact the meadow just 10 minutes below the summit of Slemenova spica but all mountaineers called it Sleme. The meadow below the summit is very nice and view from here is magnificent. Jalovec, 2645m, Mala Mojstrovka, 2332m, Travnik, 2379m, Site, 2305m, Spik, 2472m, Skrlatica, 2740m and other the highest mountain of Slovenia are from here all visible.

Sleme is also in Winter very popular destination and on its slopes are skiing a lot of tour skiiers. It is nice linking between Mala Mojstrovka and Jalovec for tour skiing trip. 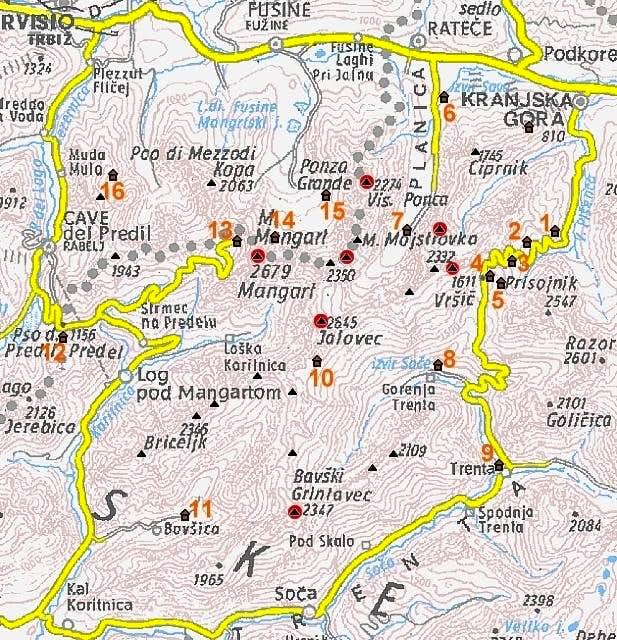 The heart of the region is Kranjska Gora resort town, 84 kilometers from the Slovenian capital Ljubljana. Starting point for Slemenova spica is either Vrsic pass (12 kilometers south of Kranjska Gora) or Tamar valley.

Slemenova spica has a lot of a different kinds of routes. From easy marked routes to harder for catch.

1.Normal route from Vrsic pass: You drive to Vrsic pass where you park and start walking on the east slopes of Nad Sitom glava, 2087m. In 30 minutes you come to Vratica pass, 1799m and then on the north side of Mojstrovka over nice plateau to the summit.

2.From valley Tamar: You start walking from Planinski dom Tamar (hut) and follow the route to the waterfall Tamarski slapovi (very popular place in Winter for ice climbing) and then you come to the plateau Sleme from where you come to the summit in 10 minutes.

3.From valley Tamar over Grlo: The second possibility from valley of Tamar is if you park a car before Planinski dom Tamar (hut) and you start ascending in way to the huge ravine on the north side of Slemenova spica. On the top you come to the place called Grlo, 1457m. From here you come to plateau Sleme and to the summit of Slemenova spica in one hour.

I don`t know the names of climbing routes in north face of Slemenova spica but I know that it is very popular in Winter when become a lot of waterfalls and you can climb ice climbing.

The mountain is in the Triglavski Narodni park, otherwise no limitations.

You can climb it in Summer (very popular) and in Winter for tour skiing and Winter hiking. But be careful in Winter for snow avalanches from Nad Sitom Glava, 2087m.

Camping inside the National Park is forbidden. Beside the numerous mountain huts around Mojstrovka there are plenty of hotels and private apartments in the towns and villages, which surround the area.

Here are some information about huts.

Dom v Tamarju hut (1108m) stands on the edge of picturesque meadow, in Tamar, which is upper part of Planica valley. Hut was built in 1899 and since than numerous times rebuilt and renewed, last time in 1984. From here is beautiful view on the towering peaks around, north wall of Mojstrovka and especially Jalovec (2645m). This is one of the most romantic spots in Julian Alps. It has 128 beds, hot water, electricity, phone etc. and its open ALL YEAR. Tamar hut is accessible by car from Ratece (6km).

Postarski dom na Vrsicu hut (1688m) is highest standing of 3 Vrsic pass huts and has most beautiful view. Since it is not accessible by car it remained truly mountaineering hut. It has been built in 1952 on a small terrace bellow the Vrsic peak (1737m), after which pass was named. It has 65 beds, electricity, phone, hot water and its open from June 1st to September 30th. 15 minutes on foot from Vrsic pass.

Ticarjev dom na Vrsicu hut (1620m) is standing on the southern side of Vrsic pass, just by the road. First hut here was opened in 1912 and was named Slovenska Koca (Slovenian Hut). Between 1964 and 1966 a new hut has been built, just by the old one, which was demolished upon finishing the new one. In April of 1975 huge avalanche from Mojstrovka destroyed part of the hut. It has 91 beds, hot water and electricity, phone etc. and is open from May 1st till the end of October.

Erjavceva koca na Vrsicu hut (1525m) is standing on top of small head, surrounded by larch trees, just by the road, some hundred vertical meters or 1 kilometer in distance bellow the Vrsic pass on the north side. From the hut is beautiful view on the towering Prisojnik (2547m). First hut was built here in 1901. In 1987 it has been decided that old hut is in bad condition and no longer usable, has to be demolished and new one build, at the same spot. New hut was opened in 1991. It has 94 beds, hot water, electricity, phone etc. It is open ALL YEAR.

Koca na Gozdu hut (1226m) is standing just by the Vrsic road, 8 kilometers from Kranjska Gora and 4 kilometers from Vrsic. First house standing here has been built in WW I for the workers of Vrsic road. After the war mountaineering club from Kranjska Gora bought it and opened it in summer of 1922. Hut had to be closed in 1979 because of bad condition. In summer of 1984 construction of new hut begun and it was opened in 1986. It has 43 beds. Each room has its own bathroom. It is open ALL YEAR.