Slesse Mountain is a prominent peak in the Pacific Northwest's North Cascades, two miles north of the British Columbia-U.S. border, close to the same longitude as Mt. Shuksan. Slesse means "fang" in the native Salish tongue, which aptly describes it's spire profile from many directions. The B.C. town of Chilliwack to the NW is the nearest large community.

This mountain made the news in December 1956 when the Trans Canada Airlines flight 810 lost an engine and became iced in winter storm conditions, got off-route trying to return to the Vancouver airport, and crashed on Slesse's Eastern flank near the summit killing all 62 people on board. The crash wasn't even found until May when some climbers came across pieces of the plane. Due to the hazardous terrain no attempt was ever made to recover the remains. The remnants of the crash are still present on and below the mountain and the area is protected under the BC Heritage Conservation Act. All artifacts are to be preserved in their current place and any disturbance or removal is illegal. There is now a memorial site dedicated to those that lost their lives in that fatal crash.

A large part of Slesse is made up of the granitic rocks of the Chilliwack Batholith, which intruded the area after major orogenic episodes of the region beginning around 30 million years ago. The primary rock which is found on many of the climbing routes on Slesse is grey diorite from the Batholith. However the summit ridge and the west face are composed of Darrington Phyllite, produced by contact metamorphism with the rock of the Batholith and with an intrusion of granodiorite.

Although not a high elevation summit this mountain's relief is spectacular when viewed from the East and North sides, and it has no "walk up" route, the easiest climbing route being the Southwest (standard) at 5.6. Summit views into the North Cascade Range (Northern Pickets sub-range and other peaks) are unique and wild. Some of the East side climbs are longer than 20 pitches on steep rock with approaches threatened by the objective hazards of several hanging glaciers. Most of which periodically release and slide into the lower basin below the NE Buttress. 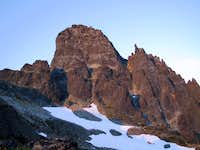 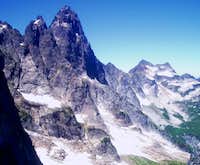 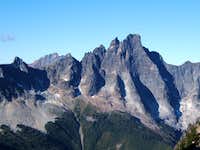 The peak was first climbed in 1927 from the Southwest (Slesse Creek) by Stan Henderson, Mills Winram, and Fred Parkes.

FWA Feb 1955 of the Southwest route by Fips Broda and John Dudra.

The immense north side was finally climbed via the Northeast Buttress on Aug 26-28, 1963 by Fred Beckey, Steve Marts and Eric Bjornstadt (one of the 50 Classic Climbs of North America) AAJ Article.

FWA of the NE Buttress, March 1986. During the first eight days of March Jim Nelson and Kit Lewis made the first winter ascent. After helicoptering to the base, the pair spent the next seven days on the route. Two days were spent waiting out a storm 250 feet below the summit. It was their fifth attempt of the climb. 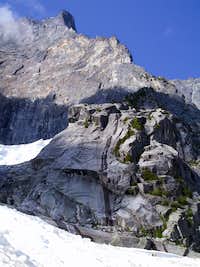 For the East side routes drive East on the Chilliwack Lake road for 19 miles (30km) to the Nesakwatch Creek road. Take the right fork for 2.5 miles (4 km) to where the road is washed out. Park on the side of the road. Hike another 1.5 miles on the road to the trailhead.

The Slesse Memorial Trail is taken to the first memorial site and plaque. For the NE Buttress bypass route continue up the trail and look for cairns. For the full buttress go straight down from the first memorial. Find climber's paths to your intended route. Be aware of the objective hazards on and below the hanging glaciers, both the bypass and full buttress approach are threatened.

For West side routes take the Slesse Creek Road (dirt as well) to it's end of driving capability. Find the marked climber's path to the Western and Southern routes. 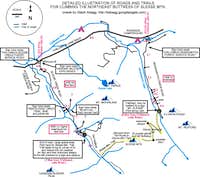 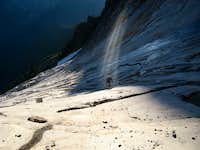 The peak is best climbed in June - September months, but it can storm/snow even in the middle of summer, rain and fog cover being the most frequent reasons for aborted attempts. Climbing this peak in winter is very difficult as bad weather systems plague the area and cover the rock in rain, snow, or ice.

Bivy ledges can be found on most routes and the summit. On the NE Buttress numerous bivy spots can be found all along the route, the best being the large ledge at mid height.(usually has snow for water until mid August). 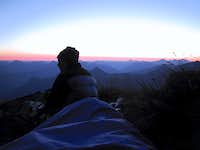 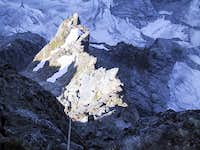 The usual descent off the summit is now the Crossover descent. The initial descent off the summit area remains the same. With road closures making the West side descent very impractical, the Crossover descent (East side approach, East side descent) is now well marked and includes a new trail through the trees down to the memorial. 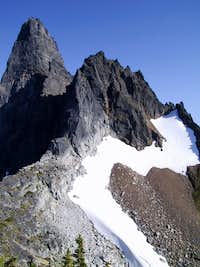 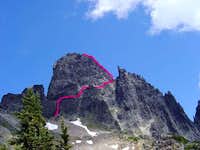 A nice photo TR of the North Face Couloir May 2009

Guidebooks and Other Publications

Slesse is a big mountain in an area of often times nasty weather, pay attention to the forecast but don't rely on it. Be prepared for storm/snow/whiteout conditions even in the middle of summer.

Rockfall can be a factor. The geology of the mountain contains several different types of rock, while the well traveled routes may be comparatively clean they still have some rockfall hazard.

The hanging glaciers are sitting on top of steep polished slabs. Pieces can break off and slide and many times the entire bypass glacier will cut loose and slide off all at once. It may be better to only approach in the early hours of dawn and/or when temps are cooler, although slides can happen at any time. The only way to be absolutely sure is to wait until the bypass glacier slides off completely, usually in late season, although this doesn't happen every year. In addition the direct start to the NEB is threatened by the northern hanging glacier which never slides completely off.

More than one climber has been killed by icefall from the bypass glacier. 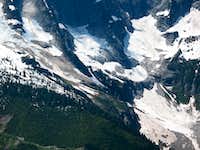 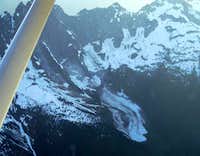 Mountain climbing is a inherently dangerous activity that involves unavoidable risks that every climber must assume. These risks can cause personal injury or death, and must be undertaken only with adequate gear, skills, and experience. These pages are only a guide to the climbs, a composite opinion from many sources, some of which may not be accurate. Climbing conditions can change or deteriorate since this information was gathered. Also climbing conditions can change day to day due to weather or other factors. A route that is safe in good weather for a highly equipped/skilled/experienced climber may not be safe for someone with less gear/skills/experience or in bad weather. Do not rely solely on the information/descriptions contained on these pages. Summitpost nor the author of these pages can nor will be held responsible in any way for any problems caused by any use of these pages. Use your own good judgment, remember you are on your own.

One issue in this area is the changing status and condition of forest service roads. I mean, what is written about the FSRs on this page may or may not be correct at any given time. For updates go to this site: http://www.for.gov.bc.ca/dck/Engineering/FSR_Conditions.htm

Crossover descent slid in August 2019, go out Slesse Creek drainage or prepare for a new adventure out... We rappelled by scrambling down notch at summit ~30m to boulder With sling followed by 8 rappels with a 70m (Slesse creek side of Mountain). Take extra cord for rappel and maybe a hand drill to beef up a couple rappels. Then walk on trail down ridge to Slesse Creek drainage. Follow trail on Gaia... Image of descent in profile.