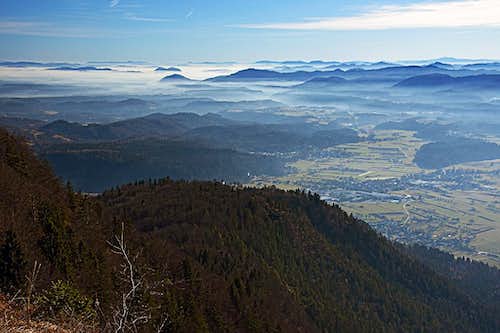 Autumn view from the E ridge
All mountain groups must start somewhere and that start can be very modest. On the west Kamnik and Savinja Alps are starting with a long tail, a low-altitude limestone ridge, which rises up at Žirovnica. More towards the east it culminates in two elevations: the forrested Pleče, 1131 m, and the very panoramic Smokuški vrh. As the border with Karawanks mountains goes here more towards the north, below Begunjščica, also some other elevations of this forrested area belong to this small group, which finally ends on the east with Draga valley. I can't tell much about the other summits for now. Some elevations are: Tolsti vrh, 1225 m, near Poljška planina, Rovt, 1185 m, Ovčeniki, 1054 m, Vrh Velikih Gač and Mali vrh, 988 m, just above the Kamen castle.

Smokuški vrh offers some not high, but very pleasant hikes, at the end rewarding us with a really great panorama. The whole Gorenjska plane lies below our feet and in the distance Julian Alps are shining. That's why the summit is very popular with hikers.

The summit can be quite quickly reached from the villages, surrounding it on the southern side. The best exit from the E61 highway is at Lesce town. 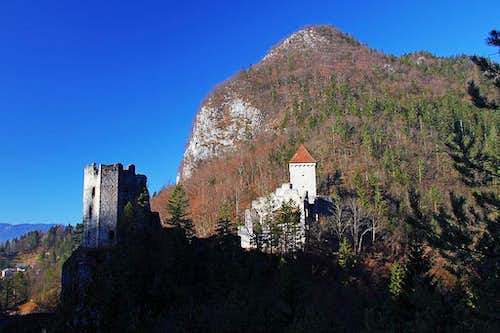 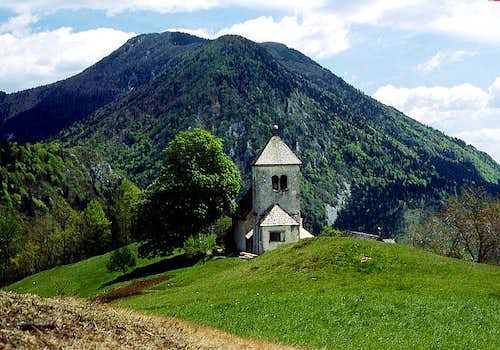 St. Peter church
Archeologic evidence is showing that people have been living in these areas since neolithic times. You can visit those places, but not much is seen there - the artefacts are in various Slovenian museums. But for sure is worth visiting the Kamen castle (Grad Kamen). It is one of the landmarks of Gorenjska region. The castle was built probably in the 12th century (or earlier) and was guarding at that time important trade route through the Draga valley. Later among its owners were also the members of Lamberg family, whose bravery came into late medieval romances. Today the castle is mostly in ruins. Only parts of it are restaurated and arranged for tourists visit. Near the castle there is the Zijalka cave, in which people lived in bronze age, perhaps even in late neolithic. Further on the mysterious Devil's caves in limestone walls are closed with walls and the approach is forbidden - a few windows are too small anyway so that people can't squeeze in. On a small terrace, called Njivice, the remains of a fortified iron age settlement were found. On the hill just above Begunje one of the cutest churches in Gorenjska stands. That's St. Peter, built already in the 16th century. It's interior is decorated with old frescoes and the place itself is shrouded in legends. Finally let's mention also the second small mountain church in the area. That's St. Lawrence (above Breznica), originating from the 14th century. It also seems to stand on a cult place, during the Turks raids it served also as a refugium. Later the church was destroyed and built again end of 20th century.

Lamberg route. This is a tourist path which visits the main attractions of Draga valley. It starts at Dom v Dragi (hut), 696 m, and goes down the valley. Before reaching the castle, it visits the memorial place to victims of the Nazi regime during the World War II (in Begunje there was a mass prison and many people were killed). Then the path climbs on the Kamen castle, continues past Zijalka cave, Devil's caves, Njivice terrace and down to Krpin recreational area. 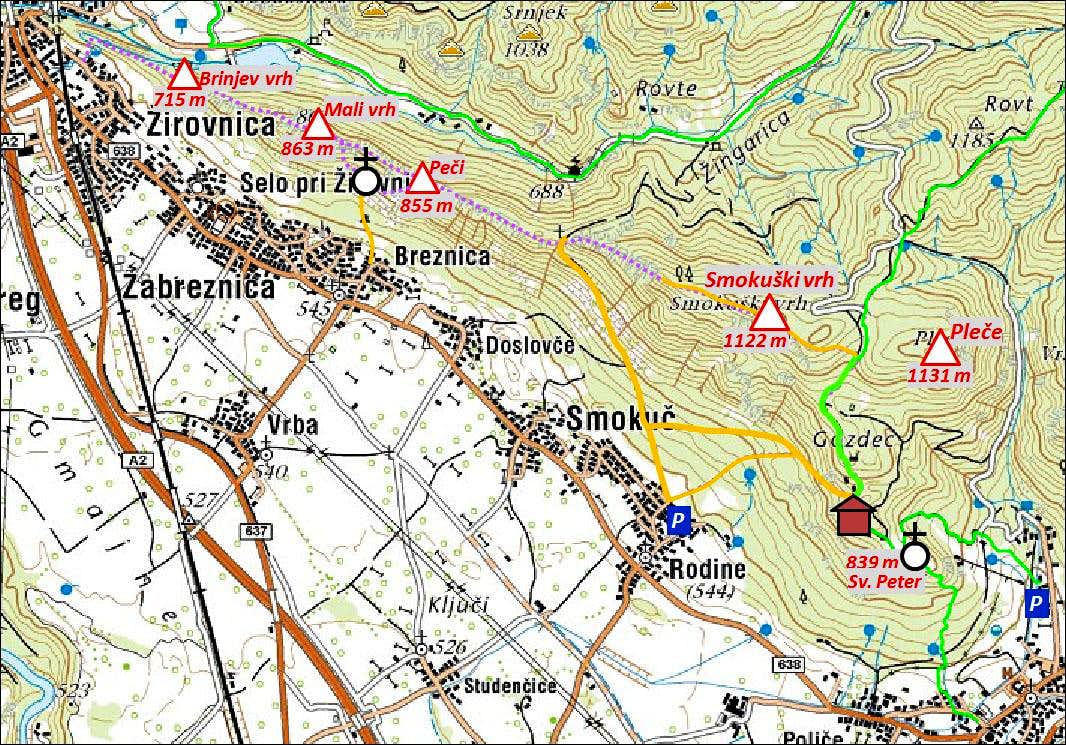 From the trailheads on the south, east and north, the summit of Smokuški vrh is easily reachable. We'll list a few variants. Coming up by the long west-northwest ridge is much more demanding, but very beautiful.

1. The ascents to Sv. Peter and the nearby Sankaška koča (hut).

a. The first marked path comes up from the south, from Begunje. You overcome some 260 m of altitude in 45 minutes, the path is easy (T2).

b. From the southeast, the marked path comes from Krpin. You mostly follow the ex ski slope and dirt roads. 45 minutes, T1.

c. From Rodine you follow an unmarked path (but inscription plates) first towards the northeast, then eastwards. 50 minutes, T2.

2. From Sv. Peter on Smokuški vrh. From Sankaška koča (hut) we continue by a broad, well beaten path towards the north. We pass a few weekend huts and continue to the hunters hut. Soon we find ourselves on a broad forrested saddle between Pleče and Smokuški vrh. From the other side a forrest road also reaches there. There we turn left and start ascending by a good path towards the west. We mostly keep left of the road and in the final stage closer to the main ridge. 50 minutes, easy (carefully orient yourself), T2.

3. From Završnica valley. We can drive in the valley till its end. When reaching the meadow on some 900 m, you will notice a mountain road deterring right. It ascends all the time soutwards, crossing the slopes and finally reaching the saddle between Pleče and Smokuški vrh. Then on top as under #2. Easy, 1 h, only 250 m of ascent, but quite some distance. T2.

From Krpin recreational area (near Begunje) the valley of Blatnica ascends towards the north. We can go by the road, until it turns into a good path, which on a distinct saddle joins the road from Završnica. Then left on the other saddle and on top. 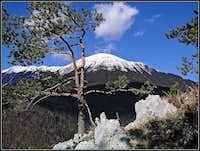 Stol from the N-NW ridge

On the N-NW ridge
4. The west-northwest ridge. This is for sure one of the most beautiful routes on summits of such a low altitude. Quite demanding (T3/T4) and all the time very panoramic. I suggest to leave in Begunje bikes, that will enable a fast return. If we really want to do the whole ridge, then why not starting it from Žirovnica? In the slope you will see a water reservoir, there up you can best gain the ridge. But continuing by it soon becomes quite demanding. A few steep rocks, some easy climbing and there, and we are on the first elevation. Continuing is easier, there's a nice, narrow path and from the left another one gains the ridge. That one is the officially recommended - it starts in Završnica valley, from the lake dam. In continuation we soon gain the more distinct summit of Mali vrh, 863 m.

Continuing eastwards, we have a small dilemma. Either we keep on the ridge, or descend by a path in the southern slopes, where on a nice terrace the small church of St. Lovrenc stands. From it we can then go up on the ridge again, cross the panoramic part, called Peči, and then reach a dostinct notch in our ridge. That point can be reached by a good path also from Rodine (on the SE) and from Završnica valley (on the NE).

From the notch on, the steep part of ascent is ahead of us. The path is well beaten, but requires some additional attention. We quickly gain altitude over a few distinct ridge steps, mostly moving by the ridge, only time to time either on the southern or on the northern side. So we exit on the western fore-summit, actually on a very panoramic balcony with a nice bench. From there the panorama is the greatest! Continuation goes then easiliy by the summit ridge, which is mostly forrested - very nice in autumn.

When To Ascend Smokuski vrh? 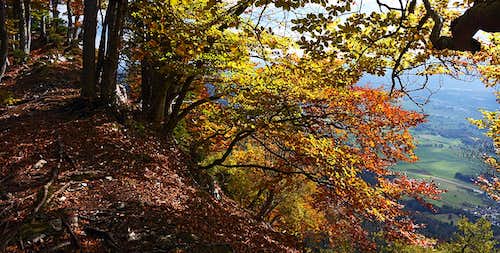 The summit ridge in autumn
From Sankaška koča it can be reached through the whole year, depending on amount of snow. Due to its popularity the path is soon trodden, but take care of overall conditions!

The W-NW ridge can be recommended only in dry, snow-free conditions. Don't go there when the ridge is icy or covered with more snow! Some parts of the route go by the northern, shady and also steep and exposed enough slopes.

On a panoramic terrace, NW of Sv. Peter church, there is Sankaška koča, 867 m. Depending on snow conditions, it can be opened in weekends through the whole year. From Begunje or from Rodine you have 1 h till the hut.