With the altitude of 2637m Smolikasis the second highest mountain in Greece after Olympus. There is a significant elevation difference of about 280m between the two peaks, this is an effect of the geological differentiation between Olympus and almost any other mountain in Greece. Smolikas is, in turn, the highest mountain of Ypirous and an entry in the main Peakbagger list for Greece.
The mountain is generally of low prominence following the example of the nearby Tymfh mountain that also has a very low prominence to height ratio. The mountain is not steep and very lush without any cliffs and rugged faces contradictory to many nearby mountains like Tymfh and Grammos. The mountain is also technically home to a ski resort although the ski resort is on a nearby peak of the general Smolikas mountain area.
The mountain is approx. 19.975 hectares and starts west from the peak of Kleftis (1846m) to the river of Romios just east of the village of Samarina. The north border is the peak Vouzion or Guftisa (1660m) and the river of Elliniko passing through the village of Ag. Paraskeuh, the final south border is the river of Aoos or Voja, a large river that passes from these mountains all the way through Albania. This area is a Natura 2000 area and 90% of it is part of Ioannina whilst the rest 10% is a part of Grevena.
The flora of the mountain is mainly dominated by Black Pine, Bosnian Pine and Oak. Whilst the fauna is very extensive, with 120 species of birds, 30 species of reptiles (including the alpine Tritons) and 40 species of mammals including bears, wolves and , wildcats. There is also an extensive population of fish in the numerous rivers through the range, mainly trout and eels.

Situated in western Greece, following this article you can see that Smolikas is directly in one of the 'wettest' areas in Greece. Also, the fact that it is the highest peak in the area, an area with 5 large 2000+m peaks doesn't help either.  That in turn results in massive snowfalls that start around late December during good years, (e.g January 3rd 2017: There was almost no visible snow on Smolikas as seen from nearby Tymfh) the snow remains until early May and usually large to mid-sized snow-patches remain for two or three more weeks. The wind and storms result to cornices during the early spring months although due to the low slope nature of the mountain it is not a large concern the east ridge of the mountain is under large cornice danger during late spring.
You can easily ski-mountaineer during all the winter months although in general Greek conditions it is not recommended to head on the mountain between mid-January and late-February. The best snow is around mid-April where the days are longer and the skies clear and the snow is perfect cold powder.

Due to the fact that there is a lot of rain and snow, this area includes big forests, still wild, one of the few areas in Europe where you can still find rich wildlife, with even some bears close to Smolikas. The flora is also special, throughout the mountain whilst fauna is even more special with the existence of the 'lake dragons' on the alpine lake at 2150m on the mountain. 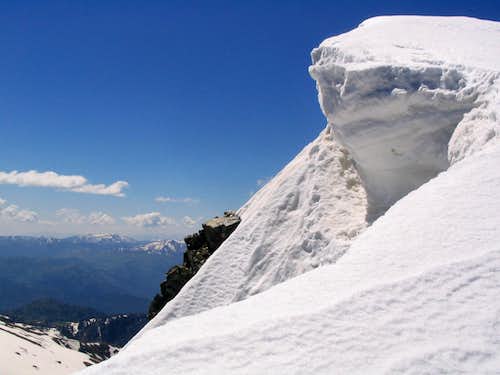 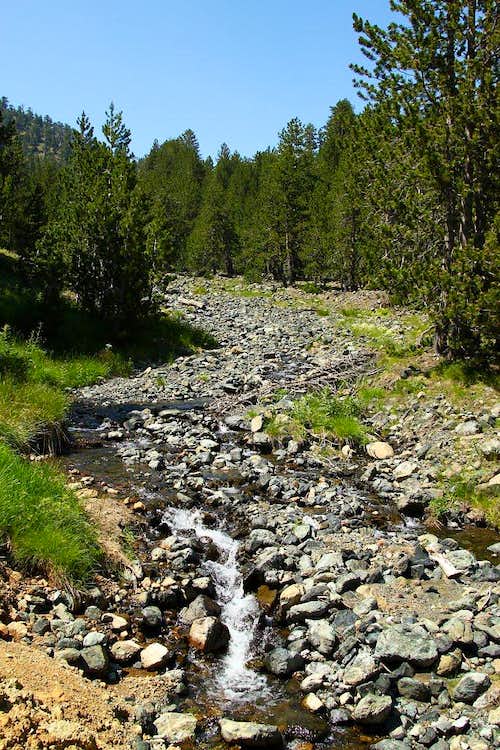 A great example of the flora

You can start the climb from six different villages, three on the south and three on the north face. The general reference point for reaching the mountain is the city of Konitsa near the Greek - Albania border. You can also access the east most trails by driving to the city of Grevena.
From Athens to Konitsa, it's a long drive on usually good roads; the best way is through the Rio Antirio bridge then the city of Ioannina and lastly the city of Konitsa. This route is a large trip but faster than any other way since the roads through the Pindus are way worse. The trip takes around 6 hours.


From Konitsa to the South face villages, the road is not in very good shape, be careful with potholes, rocks or tortoises (!) on the road, and don't get disturbed by the beautiful views to the east face of Gamila range... Count at least 1 hour (with good weather conditions) from Konista to Palioseli.


Here are all the navigation presets for all the trailheads:
If you are pressed on the time you can fly from Athens Int. Airport to the airport of Ioannina and then drive about 1:30h.

The mountain features an extensive system of trails that pass through almost all the high peaks of the mountain. The trails start as we said from six or seven villages, the trails are of variable difficulty and most can be climbed year-round. There are technically seven different summit routes so:

This route can be found in more details on the route page written by co-author Thomas Gurviez, the route is one of the longest on the south face and it is fairly easy and straightforward even during the winter. It is 9.6km long and 1.7km of vertical gain. It is generally denoted as O3.

This is another straightforward and easy climb from the village of Pads, The trail meets with the Palioselli O3 trail under the peak of Misoraxh. This trail is shorter at 8.3km and 1500m of vertical gain, the trail can be cut in 2km if you drive up to 1900m the road is pretty bad.

This is easily the longest trail on the south face being 15km long and with a massive 1820m vertical gain. The trail is rather hard since it passes the Mosia pass that is a very steep and exposed ridge. During the winter this route is not recommended. You can also drive up a large section of the trail.

This is the main east ridge route, it is very long and steep although the views and terrain are amazing. The trail begins at the village of Samarina one of the highest villages in the Balkans. The trail is a part of the north face although it crosses the east ridge, the trail traverses the entirety of the Mosia pass/ridge that is the most technical part on the mountain. During the winter months, this trail is a high-grade mountaineering traverse whilst during early summer the trail is lush with many rivers. The trail is 13.5km long and has 1820m of vertical gain.

This trail is a direct north face trial, it begins close to the village of Ag. Paraskeuh and follows a river up to the alpine where it traverses under the Mosia ridge, the trail is 8.5km long and has 1620m vertical gain.

This is the most direct and easy trailhead from the north face being 9km long and gaining 1602m of vertical.

This is a long and very gruelling trail that begins from the village of Pournia and after 14.3km and 2.9km of vertical (yes 3km...), it reaches the summit. The trail is mainly in the subalpine and then it meets with the O3 trail to head to the summit.

Drakolimnh or Dragon Lake in English is an alpine all-season lake situated west of the summit at 2150m of elevation. The lake a 'brother' to the well known Drakolimnh of nearby Tymfh, this one although is smaller but deeper. It is heart-shaped with red soil bottom, it serves as a perfect campsite with crazy good views of the summit and three trails passing through (around) it.
This lake is home to Alpine Tritons (Triturus alpestris) 10-12cm long lizards that can both swim and walk on land, even tho they aren't under extinction we must protect them.

It is questionable if you can swim in the lake, i wouldn't recommend it tho. 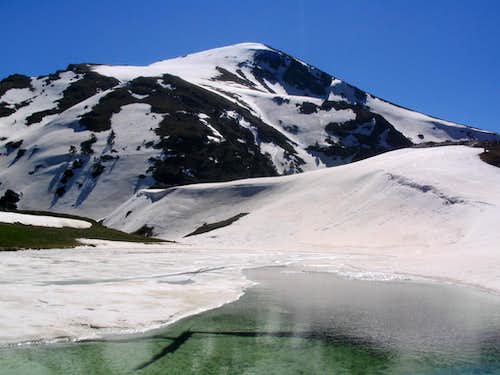 Drakolimni lake in the foreground, Smolikas northwestern slopes in the background 05/18/06 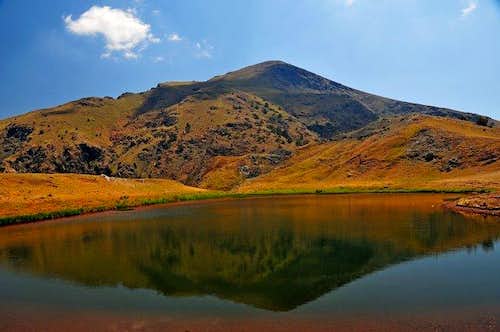 Lake and Summit with Autumn colors 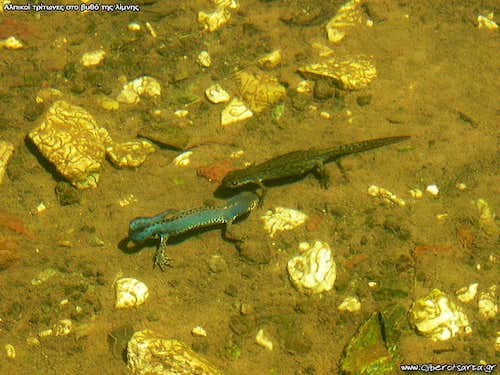 The Trtions that live in the lake

If you are in the area during the ski season you can choose between ski mountaineering and/or resort skiing in the nearby Vasilitsa ski resort. The ski resort has 5 ski lifts and 16 adult groomed runs and 2 babies groomed runs. The resort offers excellent tree skiing and powder during large storm cycles and it's it a ski mountaineering favourite between skiers. The highest resort elevation is at 2115m whilst the Vasilitsa peak is 2249m. 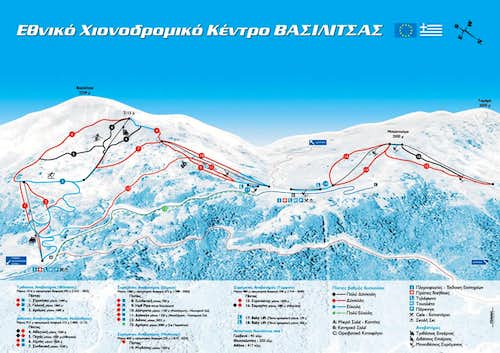 Resort map
You can always though ski mountaineer on the slopes of Smolikas its self. You can find information here. It is recommended that you always ski with someone else and never underestimate the mountain or overestimate yourself. Safe skiing.
There is no avalanche website for Greece thus the avalanche forecast for Vasilitsa ski resort will be your baseline for ski mo on Smolikas. This is their website.

There are many places to sleep, eat and drink. Logistic sheets will be attached to this page in due time.

There is no Red Tape associated with this or pretty much any mountain in Greece. This mountain is anyways a Natura 2000 site meaning that you should treat it as a national park.

You can camp anywhere on the mountain, although it is recommended to camp on the alpine zone of the mountain (1800m +), there is also one refuge and one emergency refuge located at the trailhead of the Palioselli village.