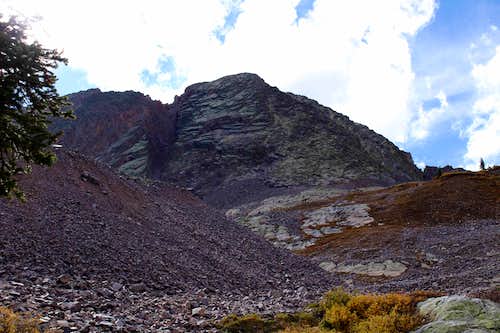 The approach: Snowdon's west rib is hidden when seen from Molas Pass and Andrews Lake. Once you are close enough to greet the mountain, you will see it.
The west "rib" of Snowdon Peak is a fun scramble on remarkably solid rock. It is the same purple quartzite that forms the nearby Grenadiers, and this mountain will remind you of those peaks. I've been to this area several times, and it is one of my favorite places for scrambling in the San Juans. The route described below follows the westernmost protrusion of Snowdon, which lies just southwest of the Naked Lady Couloir and West Buttress approaches (discussed in adjacent pages.)

Molas Pass
This route is not a walkup. It is a sustained class III scramble surrounded by technical class IV areas with high exposure. Multiple derivatives are possible should you choose to venture into more difficult climbing.
Beware: the quartzite is slippery even when it is dry, and it can slab out unexpectedly at a strong pitch. Do not ever, under any circumstance, attempt the quartzite if it is wet. While the coulouirs in this area would make for good winter climbing, I've tried this route in the early winter, and even minimal ice on the rock changed conditions entirely. Following the route below will skirt you around the areas of greatest exposure, but the slab and ramp-like formations will tempt you to into technical areas. Trust your hands more than your feet.

Everything considered, you should have sharp routefinding skills and comfort in evaluating class III and class IV material.

To begin your journey, park at Andrews Lake immediately south of Molas Pass on US 550. At the southeast side of Andrews Lake, take the Crater Lake Trail up a brief series of switchbacks for approximately one mile. At a point where the trail tops out on a knoll with good views, look for a newly-installed trail register and a smaller left fork on the trail. Leave the Crater Lake Trail and take the smaller left fork, immediately passing two small ponds and a small gravely bench which mark the start of a large meadow (see main picture.) Note how the stream leaving this meadow disappears underground on your right. After you descend the small gravel bench and enter the meadow, bear N/NE in a straight line, staying left of the stream. In some years the meadow is lush enough to disguise the trail. The trail rejoins the streambank in a small marshy area at the far side of the meadow. Always skirting the left side of the water, a clear trail then enters the trees and begins gaining elevation. 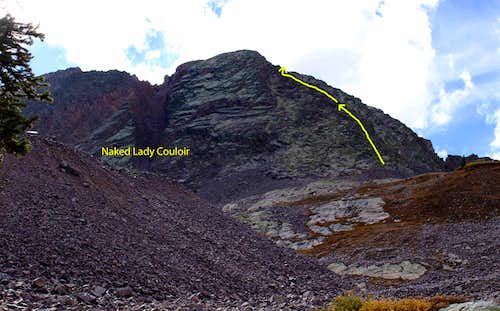 West Rib - Route as seen from the foot of the talus moraine
You will contour upward in elevation, staying left and above the stream channel. The trail becomes threaded at times to avoid fallen trees. Navigate your way through this area until you come out at the foot of a talus moraine. Bear right and cross beneath the foot of the moraine, and then look up to study the scramble in front of you. From the meadow, Snowdon looks like a clean rock face with the Naked Lady Couloir visible on the left side. But when viewed up close, the mountain reveals a good deal of hidden relief and several ribs protrude steeply westward. From the moraine, steeply ascend a few rock benches until you come to the foot of the west rib. At the rib, you will be at a high point where you can look south along expansive talus fields. Turn left and the scrambling will start quite suddenly. Remember to stay on the crest of this rib in order to remain on the class III route. 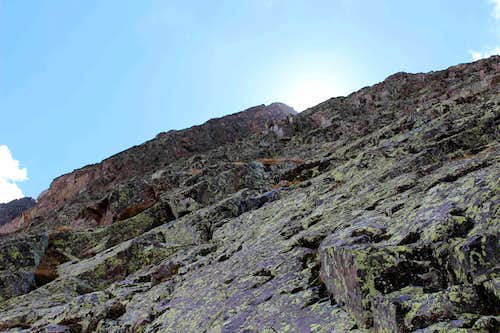 Easier relief up high and a good place for a break. Angle right and beneath the abrupt rise (distant) for easier routes. Head left for technical and exposed.
There is really no loose material here, and it would be inappropriate to say there were "boulders" because the mountain is solid. The scrambling is steep and it will require a lot of attention. Staying on the rib, you should not encounter more than 20' of exposure during any given move. Quickly, however, many tempting slab areas will open up to your left. Most options trending leftward quickly involve class VI climbing with fall exposure of 200 vertical feet or more.
As you climb the west rib, either flirt with the leftward options for class IV material, or stay right and on the high points of the west rib for a sustained class III scramble. It's an amazingly fun area for anyone who likes the intermediate scale between scrambling and true climbing. Knowing your abilities and possessing good routefinding skills is critical here. About 3/4 up the mountain, the relief on top of the west rib gives out slightly, beyond which an abrupt rise is obvious. Working around to the left of the rise will commit you to more exposure and technical climbing on the way to the summit. Alternatively, you can navigate right and over to the south side of the rib, which will lead you into a broad gully (see higher yellow arrow, bending right.) There is no exposure to speak of in the upper part of this gully, and from here simply take the route of your choice up the gully to the summit.

Grenadier and Needle Mountains above the Animas Canyon

While it would be easy to retrace your route back down, the fine views from Snowdon's summit may lead you either north or south along the top of the mountain's flank. After some thought, I wanted to include an alternate ridge traverse to a couloir descent that is not described on the other pages. The older I get the more cautious I am with these narrow couloir gullies. Occasionally you will find one with secure broken talus, but more often than not, they are dangerous scree marches filled with sliding, loose, and tumbling rock. But when approached correctly they can be very fast, which is good in times of questionable weather, and their entries are often visually striking. 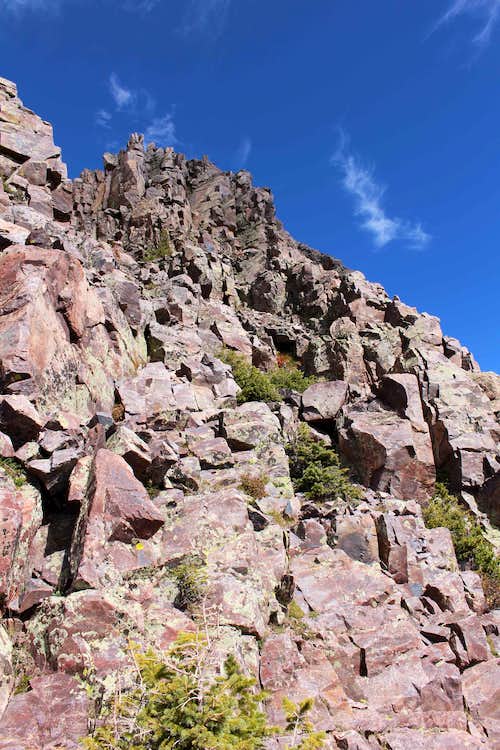 Flirting with Snowdon's East Face and moving beneath the pinnacle 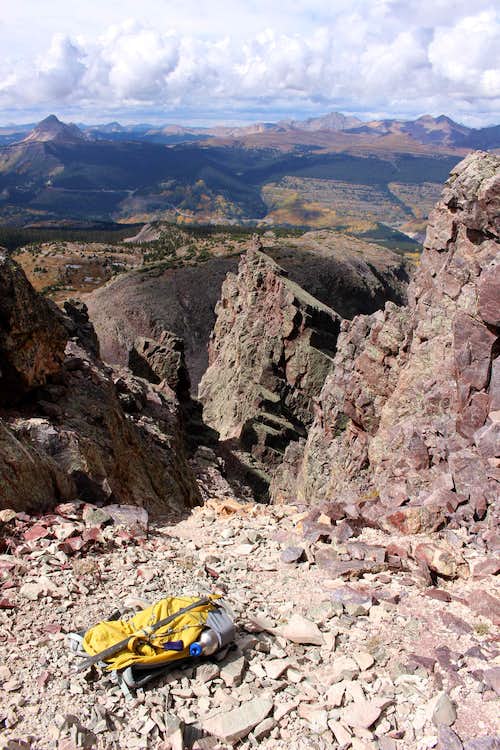 Looking into the Narrow Couloir - fast, but more work than fun
Walking southward from the summit, Snowdon's south ridge quickly tumbles into class III material. There is a very fun scrambling area as you descend in this direction, making this alternative worth mentioning. Slowly downclimb in a southerly direction and begin to favor the eastern exposures of this ridge. Work your way left (east) beneath a pinnacle, but hug it closely so as to not loose too much elevation. This will lead you right to the top of a striking couloir entry. Climbers with extra time may choose to bypass this couloir and continue navigating the south spine of Snowdon Peak to other points of descent.

You can enter this gully and use it as a fast exit from the mountain. The entry is quite impressive. However like most gullies, it bends around and becomes a funnel trap for wasting material. Be careful. A helmet in this situation is a must for anyone climbing in a group. When I was here, although the gully had been visibly used, visits to it were so infrequent that I could not identify a single other footprint. Often I remark on outdoor areas that are sensitive either ecologically, or sensitive to erosion. Please use care to disturb as little material as possible, and not "carve tracks" for all future visitors to see. I used my arrestor extensively in this couloir for a steady descent, leaving no trace of my route and avoiding any slides. However fast and visually striking, I prefer the solid scrambling elsewhere on the mountain. In future dry conditions, I would probably bypass this couloir and continue to trace the south spine of Snowdon Peak. That said, when the scree is covered in winter conditions, a snow or ice ascent of the couloir could be ideal. 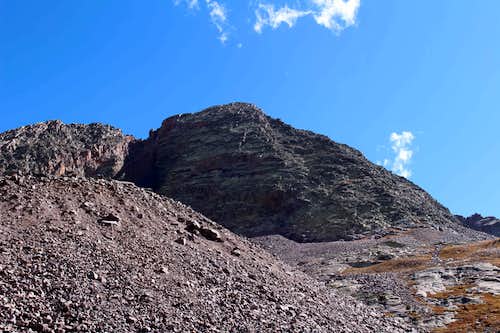 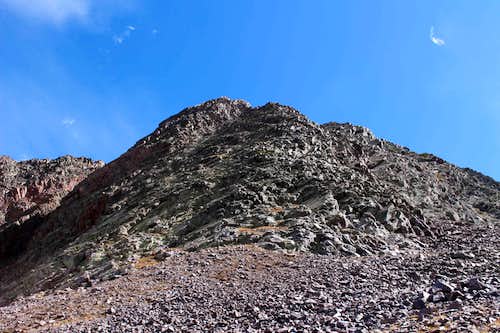 Looking back - Uncompahgre quartzite with its signature ramps and shelves 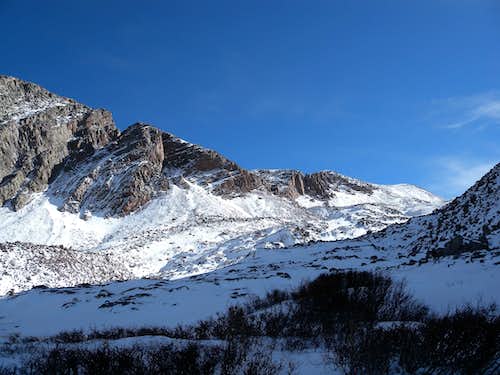 Snowdon Talus Fields in October
Finally, this area is well worth a note on winter conditions. It would be great if someone posted a full page on Snowdon just for crossing ice and snow.
The Forest Service generally lets the road into Andrews Lake fill with snow until it becomes impassible to vehicles. Depending on the snow year, eventually, only skiers and snowshoers will be able to get to Andrews Lake. The first part of the Crater Lake trail is often tracked out, but snow accumulates quickly beneath the trees and the area reveals itself as a cross-country winter paradise. Perhaps the best thing is that avalanche danger in this area is easy to avoid, and snowshoers or skiers who cross top of the talus fields on snow can reach stunning alpine vistas in the dead of winter. Climbing routes change too. Snow and ice provide convenient surfaces to enter the couloirs, bypassing the tedious scree from the previous season. Of course avalanche dangers change throughout the winter, and I think in general it poses a higher risk than summertime lightning. All the same, mountaineering is appreciating the change of seasons. Winter also reminds us of our limitations and smallness next to the mountain. A strong, icy glaze begins to creep across the quartzite slab, starting at the shaded angles of each joining shelf. With persistence, winter seamlessly encrusts the rock, and even the easiest scrambles become intimidating. 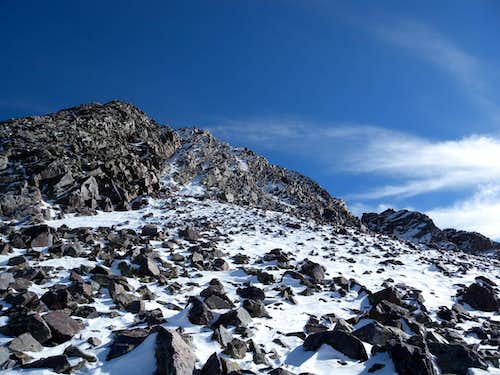 The west rib of Snowdon, windswept and beginning to ice in

This route can be climbed freehanded. Safety gear should include a helmet and an arrester. Some people will want to bring rope. The outdoor norms of waterproof shells, layers, etc. also apply.

Snowdon Peak is on regular US Forest Service land and there are no particular restrictions that I am aware of. Always read the postings at the Andrews Lake trailhead, as rules and conditions can change over time. The new trail register one mile up from Andrews Lake indicates that use in this area is going up, so remain conscious of those developments. There is no camping allowed at Andrews Lake, but I have seen no restrictions on backcountry camping.