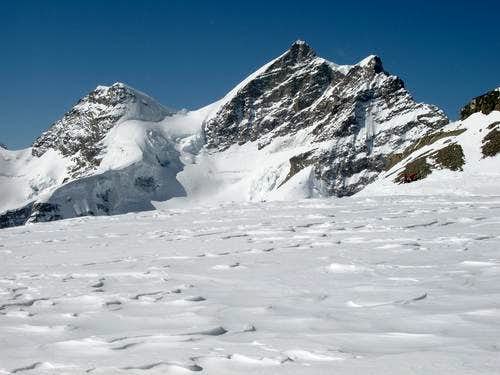 Jungfrau from near Jungfraujoch Photo bymarco979 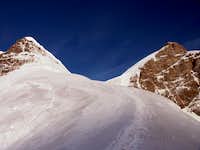 Because of increased crevasse and ice fall problems over the years, first stage of the normal route on the Jungfrau has changed from a direct line up the glacier and across the bergschrund to the Rottalsattle to a less direct, but far safer route to the Rottalsattle via the long east ridge of the Rottalhorn (the Kranzbergegg). From the Rottalsattle, the Southeast Ridge is followed to the summit. The ease of access to the Jungfrau provided by the train to the Jungfraujoch makes this a much-frequented route. Many parties take an early train to the Jungfraujoch and return to the valley with the train later on the same day. A more leisurely approach with the added advantage of an alpine start is to stay at the Mönchjoch Hut, complete the climb and return to the valley. The ease of access also contributes to a very high accident rate on this route. Johann Rudolf and Hieronymus Meyer made the first ascent of the Jungfrau with Joseph Bortis and Alois Volker on 3 August 1811 via the Rottalsattle and Southeast Ridge.

The route is most easily approached via the Jungfraujoch. It is also possible to come up the Aletsch Glacier from Konkordia Platz, but this is certainly a long ways and would not normally be done solely to climb the Jungfrau. The Jungfraujoch is normally reached with the Jungfrau Railway. 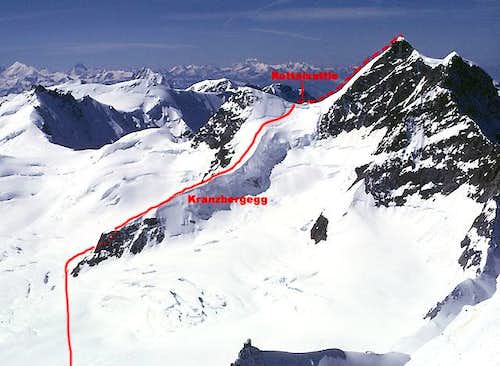 From the summit of Mönch. Dotted portion of route is on far side of the rock

From the Jungfraujoch, descend across the Jungfraufirn toward the rocky eastern end of the Kranzbergegg (Point 3506). Climb up the lower part of the rocks trending upward on the south side to a steep 20 m. step which is climbed via a crack to a ledge above which is followed further south to easier ground and top of the ridge. The snowy crest of the Kranzbergegg is followed to the point where a rising traverse can be made to the Rottalsattle. This traverse can be prone to avalanche with new snow, and the bergschrund below the Rottalsattle can vary in difficulty with conditions. From the Rottalsattle, the Southeast Ridge is climbed to the summit. It is normally easier and safer to climb the rocks on the climber's left (fixed protection). The steep snow ridge (40 to 50 degrees) should only be climbed in ideal conditions, as it can be very icy. Descent is via the same route. Some parties may want to do one rappel on the steep rock step at the east end of the Kranzbergegg. 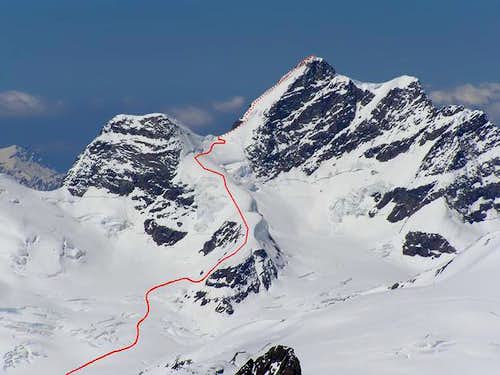 The route from a different angle.The snow ramp may not be present later in the season and rock must be climbed to attain the top of the Kransbergegg