The South Arete Route on South Early Winters Spire is probably the second most popular route in the Liberty Bell Group with the Beckey Route on Liberty Bell being number one. It would be a rare day to have this route to yourself. The route is not really on an arete. It is more a very steep ridge, and for most of the route the crest itself is not followed. Because it faces south -southwest, the route clears of snow and ice fairly early in the season. The first pitch is the hardest (5.5) with most of the rest of the route third and fourth class with the occasional fifth class move. Fred and Helmy Beckey made the first ascent of the South Arete Route in June of 1942. 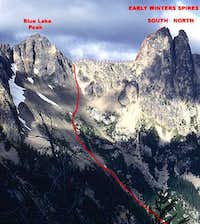 The South Arete can be approached either via the Blue Lake Trail or from the hairpin curve east of Washington Pass. From the Blue Lake Trailhead, follow the main trail about one and a half miles to the well-worn climber's trail and climb it into the basin. From there, scramble to the base of the tower. Depending on snow conditions, it may be easiest to go all the way to the small plateau at the base of Blue Lake Peak then follow the ridge crest to the base of the climb. To reach the climb from the hairpin curve to the east of Washington Pass, climb to the top of the couloir to the south of the Early Winters Spires, then traverse high along the crest to the base of the climb. 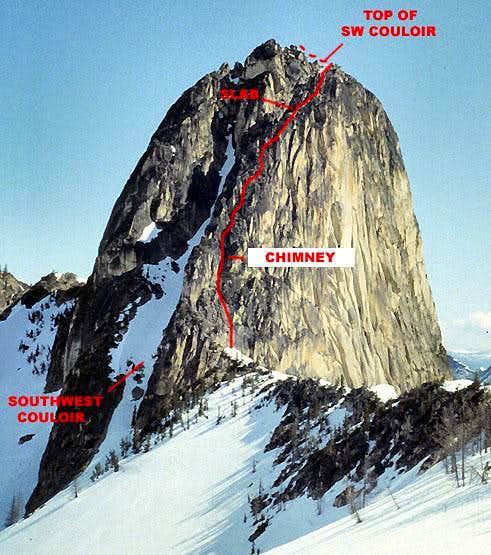 At the base of the South Arete, look for a small slab with a crack and a flake. This is the first, shortest, and technically most difficult pitch (5.5). Some sources describe it as hard to find. Look up, there will almost certainly be rappel slings hanging from a small tree at the top. 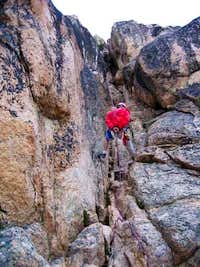 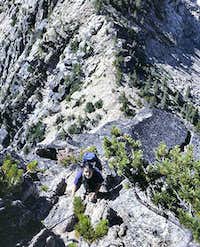 From the top of the first pitch, scramble climber's right into a gully and climb this to its head and a definite chimney. Climb the chimney (easy fifth class) to easier ground above and follow broken rock and ledges mostly just south of the crest of the ridge to near the top. Near the east end of the ridge, there is a short pitch across a narrow crest with some exposure. This short slab pitch is described in most guidebooks as unprotected. As of July, 2007 a bolt was again in place on the traverse as reported by SP member moneal: "Climbed south arete route 7-07, bolt is placed midway along the narrow crest and is definitely usable. Doesn't offer much protection IMHO but its there and available." A bolt has been placed in this spot before and subsequently removed – placed in 2002 and removed by 2004 – so, do not plan on it being present. Note - as of Sept. 2012 it was reported to be back in place, and as of July 2014 it is still there (see comments last photo below).

From this traverse, follow the crest to a high point, then go down across the top of the Southwest Couloir and up the other side to the summit. (Class 3 & 4)

The easiest and safest descent is back down the route. However, with the crowds that are frequently present this can take longer than the ascent, so be prepared for traffic jams and waits at rappel points. Another option is to descend via the Southwest Couloir. Depending on the time of year, it can be steep snow, mixed snow and rock, or all rock. There is considerable rock fall hazard once the snow has melted out.

A single rope and small rack are sufficient. Ice axe and crampons if descending the Southwest Couloir early in the season.

Trip Report of a South Arete climb with some good photos.